October brought with it extreme weather, including snow down to low levels across Central Otago, affecting a significant number of apricot crops.

Cromwell-based orchardist, Simon Webb, says a high exposed block on his property that only had wind machines for protection, received a reasonable percentage of damage, while some of his other blocks still had up to 70 percent of the crop left.

The October snow event left its mark across Central Otago
Simon is now faced with being unable to export the fruit this season, as it would be uneconomic. “We still have the same costs, so you just have to keep going with it,” he says. 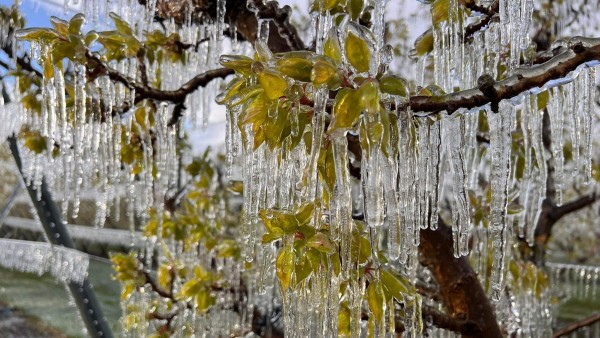 Apricots make up 30 percent of his total operation of stonefruit and pipfruit, like many other orchards in the district. Fruit from the trees that still performed well would be made available to the domestic market instead.

The last time a significant snow event occurred in Central Otago so late in the season was in November 2012, second only to the 18 September snow event in the late 1960s.

Earnscleugh orchardist, Harry Roberts, says the 1960s event was the “worst snow event” he can remember, frost fighting for nine days straight using frost pots, with six to eight inches of snow on the ground in the Cromwell Gorge where his brother-in-law was orcharding.

“It was cold. It froze hard for four nights,” Harry says. A special train was even brought up from Dunedin with more diesel for the frost pots.

This recent event had many orchardists in the district frost fighting for three nights, but Harry says the weather forecasts are so accurate nowadays, it was much easier to prepare. “You just have to be on the ball and experience some of those hard times. Windmills won’t hack it in the cold air.”

Apricots were at a growth stage where young green fruit were exposed to the elements, but Harry says his crop had actually been more affected by hard frosts three weeks prior. “We’ve had quite a few affected, but we were caught a wee bit back in the bloom.”

Panmure Orchards director, Jeremy Hiscock, says he was “in a state of dumb shock” when the weather event first came through Earnscleugh. He thought he was going to lose his entire crop.

The orchard, which is made up of cherries, nectarines and peaches, was white from top to toe, including all of the forks between the branches, with the snow building up on every leaf and petal.

“I have never seen anything like it in my life,” Jeremy says. Halfway through the first snow day, with the sunset and 5cm of fresh snow on the ground and more forecast that night, he thought his orchard was a goner, such was the weight of the snow on the trees in full bloom.