Latest rains are "not enough to save Morocco's agricultural season"

Last weekend's rainfall interrupted a long period of drought in Morocco but was not enough to lift growers' morale.

Mr. Rida Aghori, an agricultural engineer, has been observing the rainfall deficit situation since 2016, using a dashboard he has compiled from official sources. Mr. Aghori said, "the filling rate of dams in Morocco is currently 24%. In the same period of the previous year, the filling rate was 34.5%, a decrease of 10.5%. The impact of this year's rainfall deficit has had a fatal effect on the country's water reserves." 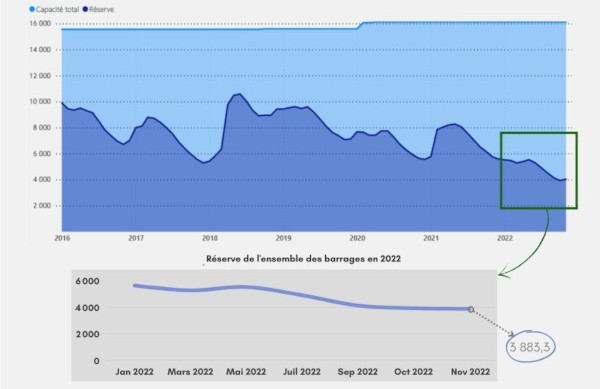 This is a worrying situation because the reserves of dams absorb the impact in case of a rain delay. Mr. Aghori explains: "The 2021/2022 agricultural season recorded a rainfall that reached 199 mm at the end of May 2022, which is 44% less than the average of the last 30 years and 34% less than in the previous season". This season was also characterized by a poor temporal and spatial distribution of rainfall, with "nearly one-third of the rainfall occurring in November and December and 53% of the cumulative rainfall occurring in March and April. Several regions of the country experienced little to no rainfall."

Morocco, like thirty other countries in the world, is currently classified by the UN as being in a state of water stress and is getting dangerously close to the threshold of absolute water shortage, which the country could reach by the end of the decade, according to the World Bank.