A three-day lake effect snowstorm that brought several feet of snow to Buffalo, New York and Western New York residents has spurred U.S. president Joe Biden to send federal aid to parts of the state to clean up after the storm. However, growers and shippers say they managed to--in essence--work around the weather event.

“The snow was quite localized and didn’t affect our operations. For the most part, our employees were able to make it to work both last Friday and yesterday,” said Tim Mansfield, director of sales & marketing for Sun Orchard Fruit in Burt, New York. “We were also able to supply our customers. The trucking companies we use were able to deliver using routes that were not in the areas affected by the large snowfall.”

Indeed, John Cushing, SVP of sales for Yes! Apples in Glenmont, New York notes that almost all of their crop has been harvested so there wasn’t a disruption on the growing end of things. He adds that its Western and Central New York facilities are also east of Buffalo, though the largest but closest facility was still about 45 minutes away. “The biggest impact was in transportation,” said Cushing. “We had some difficulties procuring trucks to haul orders to our customer base and we had a few late deliveries because of the need to travel through some storm pockets and with some road closures. Overall though, the negative impact was much less than anticipated.”

He also adds that given its geographic spread throughout all the growing regions in the state, the Central and Eastern New York facilities had the chance to step in and pick up some of the slack. 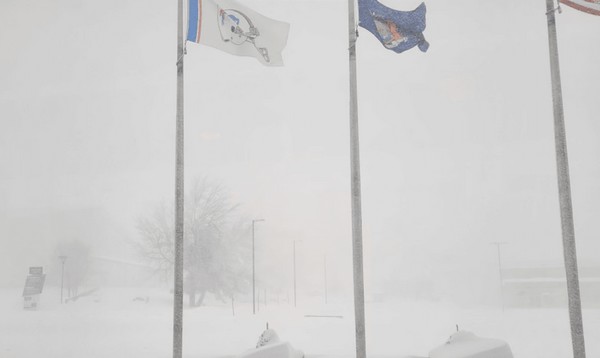 Diverting around the storm
Over in Lockport, New York, Jessica Wells, Crunch Time Apple Growers’ executive director notes that the affected area was very narrow. “Our shippers in the area said they were able to circle the storm and make deliveries without any issues,” said Wells.

What about the stores themselves? “Grocery stores in the Buffalo area looked like they weren’t getting deliveries from their warehouses for a couple of days as the produce departments were almost empty,” said Mansfield. “This was probably because the distribution centers' routes were very limited by the bans on commercial truck travel from Rochester NY to the New York / Pennsylvania border from Thursday morning through Saturday. These routes were affected by the heavy snow.”

Meanwhile, Wells was keeping an eye on a different set of consumers. The storm forced the Buffalo Bills NFL team to relocate their game against the Cleveland Browns on Sunday to Detroit. (Social media posts showed fans helping dig players out of their residences to get them on their way to Detroit.) At the same time, Crunch Time Apple Growers’ SnapDragon™ apple is the official apple sponsor of the Bills.

“We were keeping a close eye on everything the team was going through to make their game happen. We are in awe of the efforts the Bills staff and the residents of the greater Buffalo area put in to make sure the players were safe and were able to get to the game safely, in spite of most of them living in the hardest hit areas,” said Wells.

As for the storm itself, it looks to have long passed. “As of yesterday, most everything is returning to “normal”,” said Mansfield. “One colleague had around six feet of snow, so didn’t make it to work last Friday. But they were able to make it to work yesterday.”