Italian pears of the Santa Maria, Abate Fetel and Williams Christ varieties predominated. According to BLE, the range was supplemented by popular Turkish Santa Maria, and by now increasing domestic products, such as Conference, Williams Christ and Alexander Lucas. In Frankfurt, domestic Vereinsdechant and Xenia rounded out the assortment. Hamburg reported an increasingly high proportion of smaller calibers, which were not too popular with the consumers. 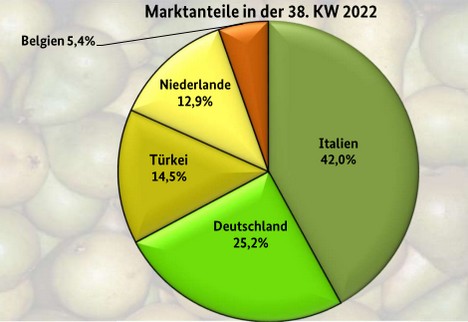 The increased supply of Italian Abate Fetel in Berlin generated lively demand, despite the high starting price of €2.60-3.30 per kilo. Beautiful Italian Boscs bottled pears, Santa Maria and Red Williams Christ were available there as well. Demand was uneven, but on the whole satisfactory. Price-wise, there were few changes this week, as supply and demand were more or less balanced.

Apples
As usual at this time, domestic produce was predominant, with variety increasing across the board in many places. Leading the way were Elstar, Jonagold, Delbarestivale and Royal Gala.

Plums
Local fruit formed the basis of the range, led by Hauszwetschge, Presenta and Top. The presence of Stanley from Serbia and Bosnia narrowed, whereas the same fruit from Moldova saw a strong expansion in many places.

Lemons
The assortment was primarily composed of South African, Argentine and Spanish arrivals. Lots from Uruguay arrived in Hamburg and Frankfurt exclusively.

Bananas
Business was mixed this week: while deliveries increased in Berlin, with buying activity remaining steady, and rates for second and third brands temporarily softened, the exact opposite trend was observed in the other markets.

Cauliflower
Domestic offerings dominated the trading activity on the market square, with Belgian and Dutch products supplementing the stores on a parity basis at certain points.

Lettuce
Lettuce came from the domestic market and was supplemented by Belgian supplies. Demand was not particularly strong, but always steady.

Cucumbers
The assortment consisted mainly of Dutch and domestic supplies. Deliveries from Belgium continued to decrease, but Spanish deliveries slowly gained in importance.

Tomatoes
Tomato shipments came in mainly from the Netherlands and Belgium. Turkish supplies gradually replaced domestic ones. In the case of regular tomatoes, imports from Poland and, as of this week, Turkey dominated the scene, much more so than offerings from the Benelux.

Sweet peppers
Imports from Poland expanded slightly here and there, continuing to compensate for supplies from the Netherlands and Belgium, which continued to decline to the point of being scarce.