Eurosemillas has arguably entered a new phase of development since it celebrated its 50th anniversary in 2019. This stage, which started years ago, is more in line with the Sustainable Development Goals and the 2030 Agenda proposed by the UN and assumed by the EU. It is defined by a greater commitment to innovation, as well as by a process of internationalization, diversification, and vertical integration of its business areas, which has sped up in recent years. "When we celebrated the company's 50th anniversary, we decided that our company's motto should be ‘Sowing innovation’. All the projects, alliances, and investments we have embarked on since then point in this direction", stated the company's managing director, Ana Cano.

Eurosemillas will participate in the upcoming Fruit Attraction, which will be held at Ifema from October 4 to 6, and it will be located at pavilion 8, stand 8D01. The company will showcase its strategic bets for three expanding crops - spring tangerine, pistachio, and avocado - with new varieties that reduce their water footprint and that, in many cases, even have a negative carbon balance. 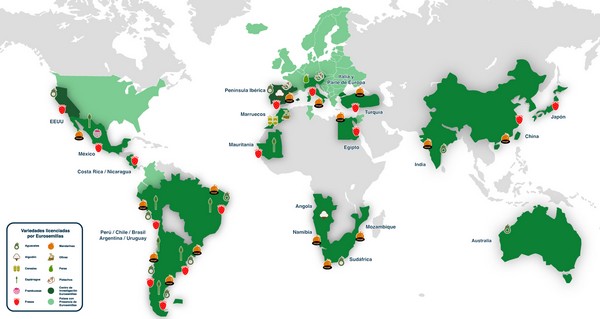 Eurosemillas has recently taken two more steps to strengthen its commitment to avocado as a food of the future. In late 2020, it announced the constitution of Green Motion, a platform that will expand the varieties and rootstocks available thanks to the improvement processes of the University of California Riverside. To optimize production systems, in 2021 Eurosemillas closed an agreement with the Malaga company Reyes Gutiérrez to exploit a new farm in the area of Lisbon (Portugal) where 200 hectares of avocado have already been planted.

Along the same lines, the company completed the commissioning of its own nursery for pistachio in Seville, specifically to supply the market with its Golden Hills and Lost Hills varieties. These pistachios can better resist a possible decrease in the water supply. They are even planted in rainfed lands and in areas where they can be cultivated due to their high profitability. In addition, they are key to settling the population in depressed rural areas.

In citrus, the company has already registered the Kinnow Low Seed mandarin, a new spring variety that yields fruits about a month later than the Tang Gold variety and has very few seeds. This innovation is also respectful of the pollinating action of bees and guarantees higher yields.

The new strawberry varieties that are the result of the agreement with California Berry Cultivars, another world leader in the production of this crop, will soon hit the market.