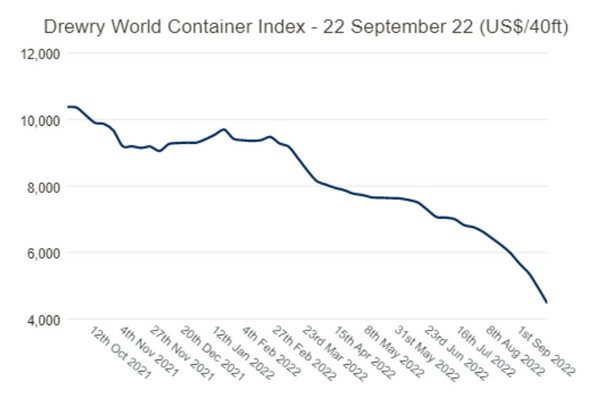 The index had shaved 57% ever since then, driven primarily by spot rate corrections in trade lanes from China to Rotterdam, Genoa, Los Angeles, and New York. The Shanghai-Los Angeles trade lanes spot rates have fallen a whopping 70% ever since its peak of US$12,424 recorded the same day a year back.

It must be noted that the recent data from the Los Angeles port showed a significant decline in monthly imports, despite the adjacent port of Long Beach recording some of those volumes. Meanwhile, Trans-Atlantic spot rates are doing well, with rates in the Rotterdam-NY appreciating by 2% over the week and recording an upside of 13% annually over the congestion scenario across both Europe & US ports.

With the key support level of US$4,900 broken, and no respite seen in terms of demand pick-up yet, certain factors that can come into play to arrest or stem the decline include the requirements for more project cargo, steel for the winters in Europe over possible Russian sanctions and holiday-driven consumption in US/EUR.

Given the vertiginous drop in rates, analysts are still of the opinion that rates can go down a bit further before bottoming out but are unsure of the pace. More data on consumption & trade over the coming weeks should help clarify things.