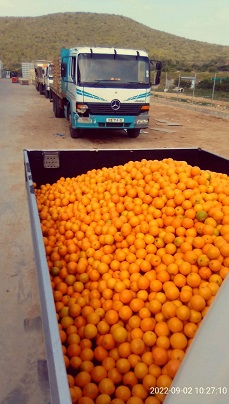 When SA Harvest read on FreshPlaza about citrus being dumped in the Sundays River Valley, they quickly saw how to turn that into opportunity.

Right: an assortment of trucks and small pickups (bakkies) picking up citrus fruit on behalf of community organisations and soup kitchens

“We've been overwhelmed with donations of citrus fruit, thanks to the generosity of four farms in the Eastern and Western Cape - JAT Fruit, Mimosa Packhouse, Stettyn Family Vineyards and Stanfarm," says Ali Conn, innovation officer at SA Harvest.

He continues: "A massive 88 tonnes of citrus fruit has been collected by our trucks, assisted by two of our beneficiaries, Guardians of the National Treasure and HewLin Compassion.”

The organisation has been pulling together a growing group of partners, both agricultural and corporate, to organise the distribution of ersatz food to food-insecure communities. 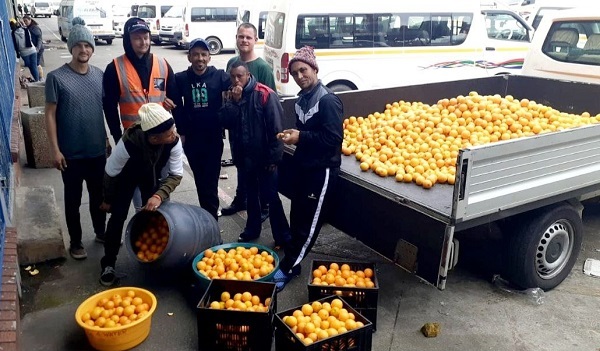 Johnnie Theron from JAT Fruit explains that giving to the community is part of the culture at Denau.

He says that the Western Cape soft citrus crop was so large this year, after years of expansion, that even the hawker trade didn’t visit the farm as much as before to buy class 3 fruit. When SA Harvest approached with the offer to collect the fruit, they didn’t hesitate. 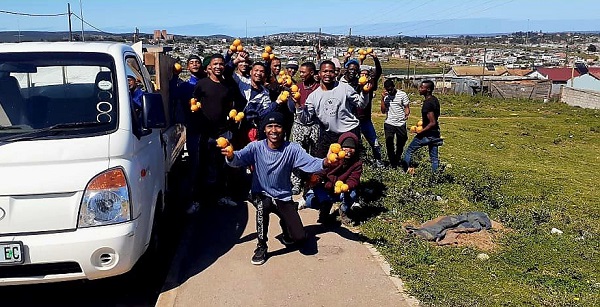 “Almost every day or every second day, different churches and welfare organisations are referred by SA Harvest to collect citrus fruit from us,“ says CJ Meiring, fourth-generation citrus farmer in the Sundays River Valley, Eastern Cape and general manager of Mimosa Packhouse.

“This is fruit we could not have exported this year. We’ve had an overwhelming amount of class 3 fruit this year, suitable for the local market. The quality is good, nothing wrong with it and it’s waxed, but we’ve had more class 3 than ever before which is directly linked to the strict requirements from the export market and overproduction.”

CJ remarks that at any year before this, this fruit would probably have been exported as class 2, but the orange and soft citrus and lemon crops in the Sundays River Valley were very large this year.

Mimosa Packhouse, in its maiden season, has donated 50 tonnes (25 bins) over three weeks to various church organisations in Port Elizabeth and Uitenhage through SA Harvest.

“We could definitely have given more but unfortunately the recipients who come don’t have large trucks,” he says.

They will be finishing their Valencias this week and lemons by next week – if it weren’t for the strike in the Sundays River Valley a few months ago, they would’ve been finished by now.

“I’ve never wished a season away like this one,” CJ says, “which is why it’s so good we can at least contribute to charity and food security.”