The British apple season has begun 7–10 days earlier than last year on most varieties. With some early Bramleys already being picked for the wholesale markets, other early varieties should start next week . This is not unusual, as last season was late. That said growers are seeing an acceleration of maturity due to the warm weather.

“It is clear that there is some effect from the drought and heat. The earlier nature of the season is predominantly down to the timing of flowering in the spring, rather than the sustained hot weather now, although this is a factor in accelerating maturity. This varies from variety to variety and orchard to orchard,” explains James Simpson, Managing Detector at Adrian Scripps. 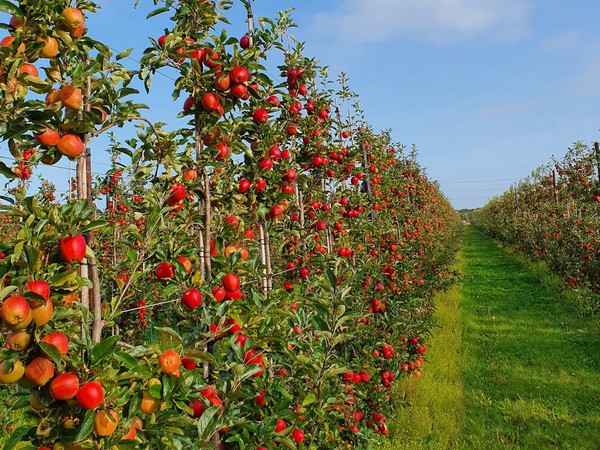 “Colour looks to be developing well, better than last season. This is in part due to the higher light levels, but also the difference in night and daytime temperatures, which with the very high day time temperatures has meant a good difference between day and night even if the nights have been warm. Fruit size in some cases appears to have been restricted through lack of water where irrigation is not available, or soil type does not hold ground water so well. Sunburn on some varieties will reduce quality. Other varieties, such as Bramley in some locations was affected by a long flowering period so has a wide variation in fruit size, this will affect grade-out. Where size has not developed growers will thin off smaller fruit, reducing yield.”

Cox, although in decline will be the first significant volume harvested, followed by Gala. There are varieties such as Windsor that will be harvested in the last two weeks of August depending upon the site. Varieties such as Discovery are in rapid decline and no longer significant. Adrian Scripps will have the first volumes of early Gala this year that will be harvested in the next 10 days, 3 to 4 weeks ahead of other Gala clones.

Weather challenges
Adrian Scripps uses trickle irrigation across almost all of their orchards. This is essential for both establishment of young orchards and dry periods such as this.

“The contrast between seasons is remarkable, at this time last year we could not harvest black currants as fields were under water. This year the currants cooked on the bush and in some plantations we lost over half the fruit. Even the best irrigation and water availability is not as good as frequent rain, but is certainly very beneficial.”

Returns from retailers
“Some retailers have very much understood the inflation growers and suppliers have faced, and although perhaps not accepted the full extent of this have increased prices to reflect a sensible share of the inflation we all face. We appreciate other retailers find the market place more competitive and like growers have responsibility to consumers to maintain affordability, but increases in retail prices on the supermarket shelf need to be fed down to the grower.”

Investing in the future
Adrian Scripps has over the years invested in state-of-the-art weather stations, irrigation and hail netting (which has a shading effect). These investments all combine to reduce the impact of the drought and high temperatures on the orchards.

“To address unprecedented increases in cost, especially with labour cost increases at over 15% in this year alone, we have continued our investment in automation and robotics. Significantly we now run a fleet of 22 harvesting platforms, increasing our picking rates and reducing our requirement for labour. We also continue to invest in solar panels across our building roofs, reducing our electricity consumption from the grid. Both are considerable financial investments.”