A number of new robotic innovations and technology are being introduced across pineapple farms across the Sunshine Coast.

At the recent Australian Pineapple Field Days, hosted by Growcom, members from across the industry were given a number of demonstrations, including LYRO Robotics Pineapple Top Sorting Solution.

"I have been told by growers that this is one of the most unpleasant jobs in the pineapple process - the act of sorting pineapple tops into small, medium and large," General Manager Mark Adams said. "It is going at around 1,000 picks per hour, which is equivalent to what a human can, but the robot can do it all day as long as there are plant materials being presented to it, it will keep going. We plan to get much faster as we get more data and get the computer vision more efficient. There are a lot of different cameras involved for taking pictures of each pineapple top that goes through so it can size it and do the sortation that way. It is getting sorted on size not weight. So, you will see it stop over a camera after it has been picked up, then it will assess the whole top such as leaf matter and everything." 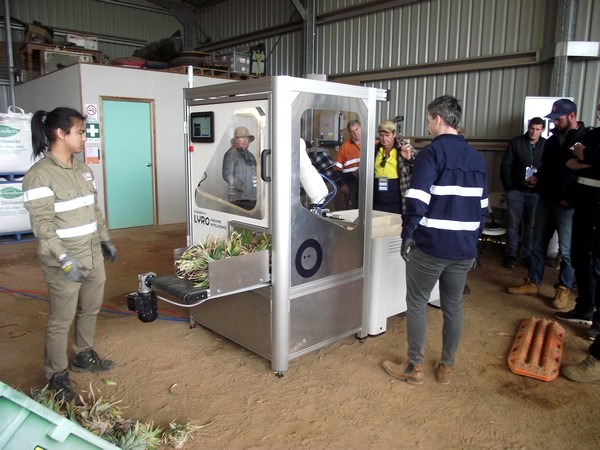 The Brisbane-based company's aim is to develop robotic systems that help phase out repetitive, labour-intensive tasks in the fresh produce supply chain. LYRO designs, develops, and deploys next-gen robots all across Australia, which have been working thousands of hours and packing tens of thousands of fresh produce items to alleviate labour pool constraints across the food supply chain.

"What you can see is the culmination of a lot of research and development," Mr Adams said. "We are specifically focused on the agriculture sector and have other applications for packing as well. As well as the picking and sorting function and we can also pack things like sweet potatoes and zucchinis as well." 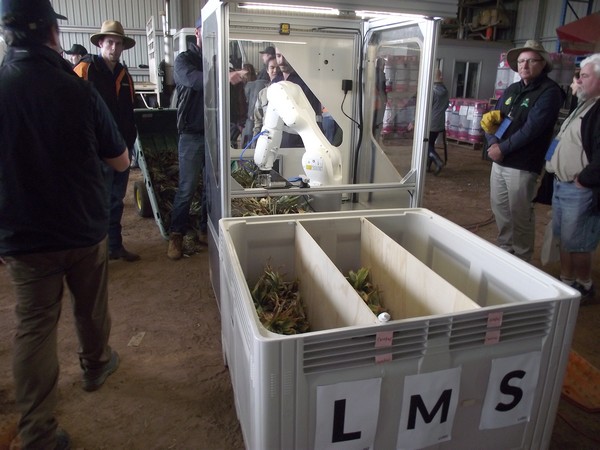 Another stop on the farm tours for delegates was Pine Co. where Faruk Buzaki demonstrated his two machines, which he built and constructed himself with no external assistance or funding. One was a Pineapple Plant Material Collector, which is around 60 per cent finished, he notes that both of his machines are currently prototypes and have yet to be fully tested in the field.

"I wanted to make some machines to make our lives easier, and make it as mechanised as possible," he said. "What happens is there is going to be a floor at the back where you stand, and the conveyor is going to go out the side, like a sugar cane harvester, and the tops go straight out into a bin. Once I put all of the rubber on, it will pick up around 98 per cent of the material. I am hoping by winter next year that it will be spot on." 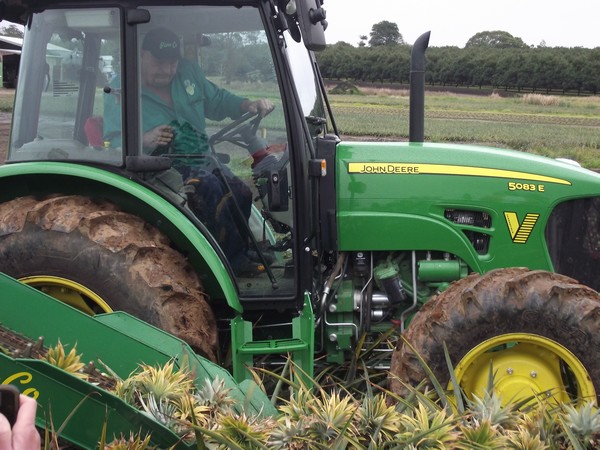 Pine Co. is a family-run farm located in the Glasshouse Mountains, north of Brisbane, where it grows the original Hawaiian variety of pineapples until they are a golden yellow so consumers have the "true original sweet" pineapple taste like back in the 1960s. Mr Buzaki's wife Catherine took over the farm after her father John Winterhoff who started the operations back in 1962, and he is still on the farm. Around 90 per cent of the fruit goes to Golden Circle, with around 10 per cent going to the fresh market. 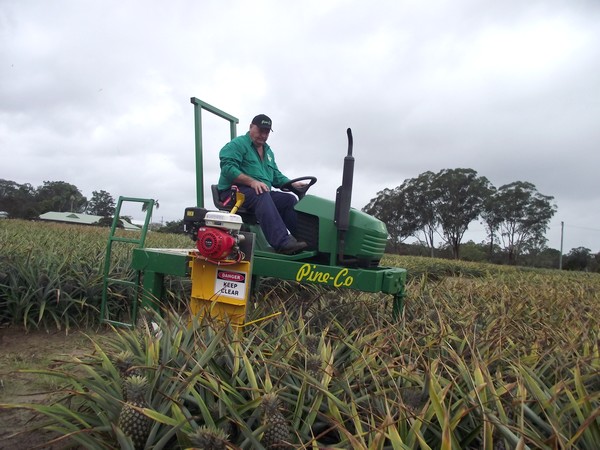 The second invention that Mr Buzaki came up with was a crop divider, which he explains is about 99 per cent finished.

"This bit of gear that he has got is primarily a chassis that has the capability of an in-field operation, where you can strap on anything that you really want," Growcom's Tim Wolens told delegates. "From having someone there picking natural fruit to inter-row spraying, which is becoming more and more popular and common in the industry. It's basically a platform that you can attach anything you want to it, and is a pretty simple application. I actually saw this machine run through a crop even without the cutter and it went through with very minimal disturbance. So if you look at that and the fruit size, that's quite amazing. Ultimately, these little bits of gear are just concepts that we have the ability to utilise, as it opens up opportunities for us to do a bit more management than what we do now."