Container backlog in port precinct to be cleared within days

Good progress at Durban port, but major damage to reefer containers at some depots

South Africa’s minister for public enterprises yesterday confirmed that vessels were taking fruit from South Africa, that Durban harbour was currently “fully functional” and that the accumulated container backlog would be cleared within the next five to six days.

The damage to large quantities of reefer containers (not all of which will be able to be rehabilitated) at some KwaZulu-Natal container depots, which remain out of operation, presents a major headache to the fruit export industry, compounding already constrained equipment availability.

As at yesterday morning, Durban port had handled 82 vessels. Marine capacity has since increased to 98% after the reopening of the N2 highway going south, Transnet clarified in a media statement.

"The basic message is Durban harbour is functional, secondly that ships that are bringing in exports are being serviced and ships that are taking out exports, including food items and fruit, are also being serviced,” Minister Pravin Gordhan told the media after his second visit to Durban port since the catastrophic floods which has plunged South Africa back into a state of emergency and claimed the lives of over 440 people (the death toll keeps rising). 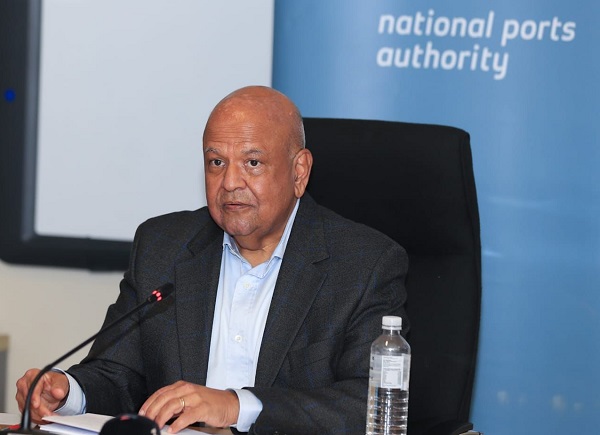 Minister Pravin Gordhan, minister of public enterprises, addressed the media yesterday on progress made at the port of Durban (photo courtesy of Transnet Corporate)

The minister noted that good progress had been made by Transnet, the Ethekwini municipality, Eskom, with the assistance of the private sector to restore functionality at the port.

Private terminal operators and the private sector will be meeting with Transnet and the government throughout the week on progress made at the port.

Terminal operators in Maydon Wharf and in the Island View area were operating at levels of between 60% and 100% with at least 90% of their staff present.

Floods choked the port with debris
Durban harbour is unique in that three river systems feed into the harbour, he told media, bringing with it astounding amounts of objects like fridges, logs and general debris that ended up in the port, paralysing tug and vessel operations. Durban harbour has been dredged to remove debris, a process that is continuing.

A dredger has been moved from Cape Town to Durban to assist in the clearing of debris. Large waterside debris is expected to be cleared by the end of this week, Transnet said, but noted that solid waste clean-up operations along the shoreline of the port would continue for an extended period due to widespread pollution.

Min Gordhan remarked that authorities would have to find ways of ensuring the debris washed into the port of Durban during floods doesn’t paralyse the functioning of the harbour.

Two lanes of Bayhead Road opened for traffic
Minister Gordhan also visited Bayhead Road “[which] has become a famous road in South Africa”, he quipped. It is the notoriously-congested access road to the Durban Container Terminal where a huge crater developed in the two inwardbound lanes. Repairs will take two to three weeks and has already started.

The two outwardbound lanes have been divided into one out- and one inwardbound lane, and trucks are again able to access terminals and yards within the harbour, working away the 8,000 to 9,000 containers that accumulated when trucks could not reach the harbour area.

Rail infrastructure suffered most damage
The major damage Transnet incurred during the flooding and mud slides was to its rail facilities, especially between Ethekwini and Cato Ridge, the minister said.

The container rail shuttle service between the Durban Container Terminal and Bayhead terminal has since resumed. "Transnet Freight Rail is engaging the relevant stakeholders around the handling of export containers from Gauteng to offload in Cato Ridge and road-haul exports to the Durban Precinct," Transnet said.

The Transnet fuel and diesel pipeline was initially dysfunctional after the floods, but it was restored within 24 hours, so that there is currently no risk of a fuel shortage inland.