Florida growers and shippers were, as of press time last night, watching, waiting, and preparing for Hurricane Ian. The last reports of the storm, which made its way through Cuba as a hurricane, indicated that it might come through the state as a Category 4 storm starting today. Reports say 2.5 million people were being told to evacuate. The state's citrus and vegetable crops are expected to be hit hardest. Most of Florida's citrus is grown in the lower two-thirds of the state, in the path of Ian. Back in 2017, Florida's citrus industry sustained $760 million in damages following Hurricane Irma.

In Plant City, Gary Guynn says there wasn't a lot to be done with its fields. "Most of the plastic has been bedded, plants are beginning to arrive, but we will not set them until after we see what happens," says Guynn of Guynn Family Produce Sales Inc. in Lakeland, Florida. "It's more or less a holding pattern. Everyone is just preparing for this hit."

Roger Riehm of Bradenton, Florida-based Blue Creek Produce LLC. also says there wasn't much that could be done to prepare for the storm. "Tomatoes were planted maybe a month ago, so that may need to be replaced, which would delay the crop another month or so after the fields dry out," says Riehm. 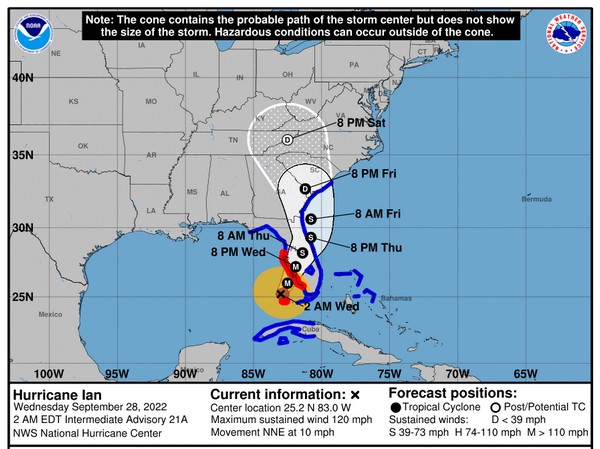 Hoping for minimal rain
"I am sure everyone is dropping the water in the ditches and pulling deeper ditches to prepare for the rain," says Hank Scott of Long and Scott Farms in Mount Dora, Florida. "We all hope and thought Hurricane Ian would turn more west and we would miss most of it. There is not too much we can do but pray we don't get as much rain as they are saying and hope they are wrong as they usually are."

Meanwhile, one trucking company reports it has canceled its Wednesday pick-ups, attributing that decision to the estimated 80+ MPH winds. It says it will attempt to make some early morning deliveries depending on if the receivers are open and if the driver deems it safe enough to make the drive.

Melissa Hartmann de Barros with HLB Specialties says that it lost a few orders that were to get picked up Monday and delivered to Sarasota Tuesday following a truck delay. "Our clients in the Tampa and Sarasota area will be closed tomorrow, so they won't be able to receive any product."

As far as growing regions affected, she says Homestead has been receiving lots of rain since Tuesday. Homestead is located south of Miami and has lots of growing fields, including dragon fruit.

Meanwhile, Neil Mazal of East Coast Farms & Vegetables in Lake Worth, Florida, says that Hurricane Ian will impact growing areas from mid-state Florida to north Carolina in varying degrees. "The storm keeps tracking further east with each new tracking path. Georgia is most at risk due to the growth stage of the crops," he says. "Depending on where the eye of the storm transits, we could see significant damage to corn, cucumbers, peppers, eggplant, and squash."

Concerns for corn
Mazal says the corn crop is in the very early stages of the harvest, and if the storm moves closer to Bainbridge, there could be severe crop loss as the corn stalks lay down due to high winds. Flooding would cause harvest problems and promote disease, while a move east would damage peppers and cucumbers that are up on poles or string. As for squash plants, they would lose bloom and be subjected to damage from flooding.

"As the storm moves into south Carolina, there would be damage on a lesser scale, but there would still be losses of pepper plants and eggplants," he says.

In the meantime, as of press time, assessments were being made about staff availability. "We are in Fort Lauderdale, Broward County, so we are not at risk at the moment. So far, we are operating normally, but we will decide today whether we need to work remotely," says Hartmann de Barros.

Staff safety
At Long and Scott Farms, while it plans to take off the day Wednesday so staff aren't endangered and can secure their homes, plans are also for staff to take Thursday off to let the fields dry out. "Hopefully, we can return on Friday with something left to harvest," said Scott. "It will surely ruin some of our production due to bees not pollinating in the wind and rain."

Looking ahead, Mazal says the real issue is that there is no near-term alternate supply for row crop vegetables. "The Canadian and Northeast supply is winding down due to seasonal plantings. Mexican crops are not ready, and California has been in short supply all season as growers have planted less due to higher growing costs and lack of water supply for some growers," he says. "Florida plantings are very early in the growth cycle and are very vulnerable to water and wind damage, so losses could be impactful into November. We can expect markets to react at least in the short term with higher prices and limited availability."