Now that growers and shippers are a little further out from Hurricane Fiona making its way from Puerto Rico--where it knocked out power and caused sizable damage--to the Dominican Republic (DR), a clearer picture of the damage done within the country is emerging. The storm moved through the DR on Monday with 18 eastern provinces on red alert.

“Even though the rain was good, it was not good with 12 hours of consecutive wind and storms,” said Cesar Perez of Frescura Tropical in the Dominican Republic. He notes that Monday evening more Fiona-related damage was reported. La Altagracia Town, La Romana, El Seibo, Hato Mayor, Maria Trinidad Sanchez, Semana, Duarte and Monte Plata will all reportedly receive help from the government to recoup severe damages.

“There is also one death and a lot of material damages in other parts of the Dominican Republic,” says Perez. Aid organization Project Hope, which has deployed emergency personnel to both Puerto Rico and the DR, reports that 789 people are internally displaced and 11,500 are without power due to flooding and downed power lines within the DR.

Though he’s not working with fruit out of the DR, Andy Thomas-Stivalet of Kavidac Produce is familiar with the damage that a storm of Fiona’s size can do to a growing operation and says there could be concerns over banana production in the country in the near future.

Most notably that an event of this size could cause large-scale damage to plantations because of the wind. He adds that the concerns would be around leaf damage and leaf shredding which in turn slows growth and damages plants and roots--this is something that can happen already at a wind of 15 knots and reports indicate the island was hit with sustained wind at 78 knots. “At around 25 knots, there is a high chance of plants breaking, folding or being uprooted, especially plants with stems,” he says.

“Stems are usually around 20-40 kilos, which is a lot of weight for an herb that is basically 99 percent water. Even at 30-40 knots, short-lived gusts--seconds to minutes--will cause massive damage to plantations where they blow through.” He adds that sustained +70 knot winds will flatten entire plantations, and that is without taking into account water damage from rising water levels. 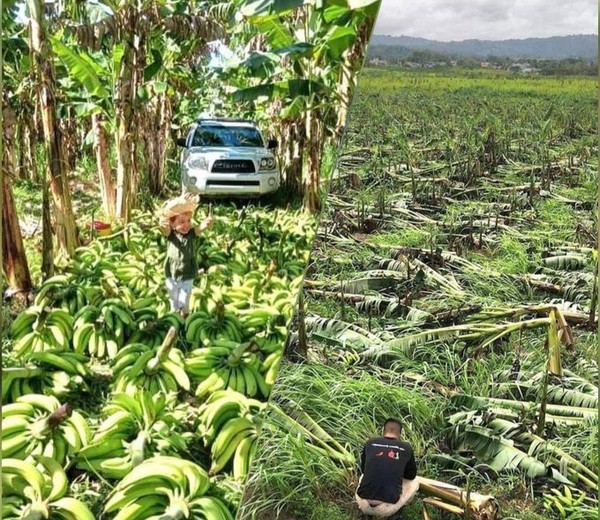 A young farmer in front of the remains of his banana plantation. Although the picture was taken in Puerto Rico, it shows the devastating impact of a hurricane. Source: Twitter.

The DR banana production picture
Thomas-Stivalet also says that the DR is mostly organic banana production comprised of small, associated producers. “With the current inflationary situation (i.e. their rising costs) and their lack of power in the supply chain, I doubt many will have the resources to replant farms that are completely lost, even if they have the appetite for it,” he says. “The DR government recently spoke out in favor of increased pricing for bananas due to the current situation in their markets. If the government has gotten involved, their producers are really suffering. Even though there is a higher price differential for organic bananas over conventional bananas, the outlook for their producers was not good -- even before this hurricane.”

In the DR, which exports 300-400 containers of bananas weekly, most of the banana cultivation takes place in the Northwestern and Southwestern corners and the central part of the country. “The hurricane was off their northern coast which to me indicates that they're going to lose the majority of their crop and banana cultivation. The South might be spared from the extreme wind damage because of the mountains, but they will be subject to flooding and water damage.”

As the industry waits on news as to how exactly plantations and other growing operations have, if at all, been affected, Thomas-Stivalet says producers who aren’t hit with extensive flooding and have their irrigation systems buried or destroyed might have a less capital-intensive restart, namely, replanting. “It may be feasible for them to do so,” he says. “But anyone who is hit with wind damage and water damage is going to be out of the game moving forward. That's my belief.”