A small amount of table grapes will be packed next week and from week 46 onwards the large volumes will start flowing, says Kobus Bothma, vice-chairperson of the Namibian Grape Growers Association (NGGA).

The Namibian Grape Growers Association estimates this year’s crop at 8.6 million 4.5kg cartons, a million cartons more than last year when the crop was significantly lighter than initially expected. 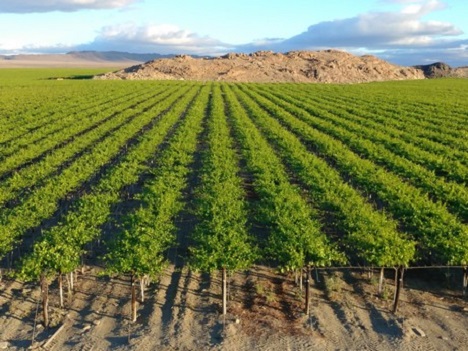 Vineyards in the Aussenkehr Valley of Namibia

“There are definitely enough grapes hanging in the vineyards to meet this year’s estimate and the grapes look very good,” he says. “This is not an early season, we’re starting at the usual time.”

He remarks that a gap during the early season in Europe could probably develop as grape exporters from South America stay closer to home with their grapes due to stratospheric shipping costs.
“We expect that there will be fewer grapes in Europe. Everyone will try for markets with closer proximity.”

Africa is developing well and at a quick pace for Southern African grapes, taking between 5% and 8% of total table grape exports. Kobus observes that African buyers (often for supermarkets) are increasingly preferring higher specification table grapes, which is a positive development for the industry.

Namibia doesn’t have table grape access to China. “We send to Malaysia, Singapore. Not large volumes, however, perhaps around 2% of our grapes will go to the Far East.”

Namibia will also supply South Africa with grapes; the market is always good early in the season but it also always falls very quickly as supply picks up, Kobus says.

“There are signs that shipping costs are starting to come down, but Cape Town harbour remains a challenge, as does South Africa’s power cuts and loadshedding.”

Namibian grapes are stuffed into refrigerated containers and trucked across the border down to the Port of Cape Town, which is exempt from loadshedding, but the surrounding cold stores (when there aren’t available plug points at the port, for instance) are subjected to the country’s planned power cuts.

Unlike South Africa, Namibia has stable power supply, ironically partly based on imported South African electricity, but increasingly powered by the sun and the wind.

“The Namibian government has invested heavily in green energy and a great amount of solar farms and wind turbines have been erected in recent years.”