The first Scottish cherries have already been picked just as the English season is coming to an end.

“We now have some earlier varieties due to a joint venture with a neighbouring grower, Peter Thomson, who has retired, we are picking and packing his 6 hectares of cherries now,” said Matthew McIntyre from McIntyre Fruit. McIntyre Fruit grows cherries over 24 hectares, plus 6 ha from their neighbour and 12 hectares of raspberries. The company has a small share in the local packhouse in Blairgowrie, which is owned by the Thomsons and McIntyres, McIntyres now rent the packhouse and have taken over the running of the facility.

“The prices at the start of the season were not great as there was a lot of English fruit on the market but it’s improving now as the English harvest is finishing up. The acreage grown in Scotland is increasing so there is a bit more competition than in the past but that is not a problem as the later varieties grown in Scotland are the only Northern Hemisphere cherries on the market from the end of August.”

Volumes will be down this season, possibly due to it being windy during the pollination period, but according to Matthew there are so many variables it hard to pinpoint the cause. The lower volumes do mean big sized fruit and great quality.

“We did some export last year, but I don’t think we will have the volumes to do so this year.”

McIntyre’s fruit is marketed by Berry Gardens, which has just been acquired by Driscolls. Matthew said this is a positive move as it really opens up export markets for the future.

Scotland experienced some very high temperatures this summer but it does not seem to have affected the fruit too much.

“We have not started picking our Sweetheart crop yet, we did expect to start a week earlier due the warm weather, but the trees seemed to shutdown during the heatwave, they also create a lot of natural shade to protect the fruit. At the weekend we had thunder storms with very heavy rain, 51mm in 24 hours. We had minimal splitting as all of our trees are in tunnels so were well protected from the downpour.”

The week running up to the storm Matthew had received word from SEPA that they were considering restricting water withdrawals from rivers, but shouldn’t be an issue now. The farm also has its own borehole for water.

A positive from the warm weather has been very little disease, last year it was much wetter and they had more problems.

“We will be harvesting the cherries at the Thomson site for another week, and will pick our own trees for the following three weeks and mid-September. It might be a slightly early end to the season due to the heat bringing the fruit on a little bit quicker.”

Matthew is not planning on storing too much fruit this season, due the lower volumes, although he may store some short term to ease the pressure in the packhouse though. 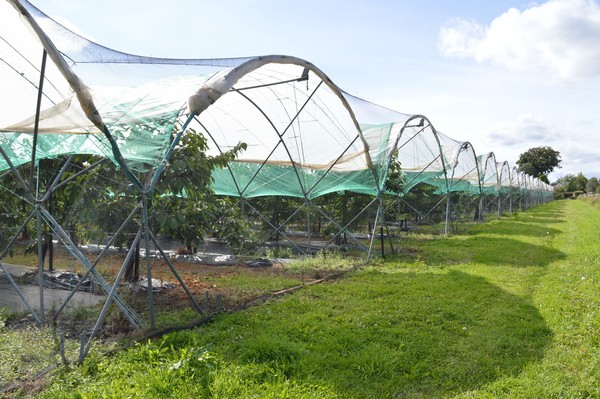 Labour
“We have been pretty fortunate with labour this year. We have a nucleus of workers from Bulgaria who return every year, some also have settled status allowing them bring family members over for the season. We also have some Ukrainians who were already in the UK. In addition we have some workers from the SAWS scheme which is great, but they are mostly inexperienced and need a bit of training.”

Matt has also had to increase wages for all workers as the SAWS people get £10.10 per hour while the minimum wage is £9.50.

“It is just not practical, or fair, to have two wage rates so we pay everyone the same, which has meant a big increase in our wage bill this season in addition to all of our other costs increasing.”

Matthew also grows 12 hectares of raspberries on the farm and said this year he may only break even with this crop, due the increase in costs but no increase in prices. This is not sustainable and he will have to have price inflation in next year to maintain the viability of producing raspberries.