Italian grapes dominated the market: Victorias and Black Magic stood out in particular. Italia had gained noticeably in importance and Italian goods appeared in Berlin and in Frankfurt. According to the BLE, the presence of Spanish fruits decreased slightly, that of Egyptian goods quite strongly. The assortment was supplemented by high-quality goods from France, somewhat cheaper ones from Greece, and some from the Islamic Republic of Iran.

Overall, demand was fairly slow. It was satisfied without difficulty thanks to the extended availability of the Italian goods. Prices generally trended downward in Hamburg: many traders tried to speed up sales with promotions, but this was not always successful. Firmer prices were recorded in Cologne, while prices in Berlin did not change significantly. There, substantial amounts of red Flame Seedless started to be marketed at €4 per kilo. 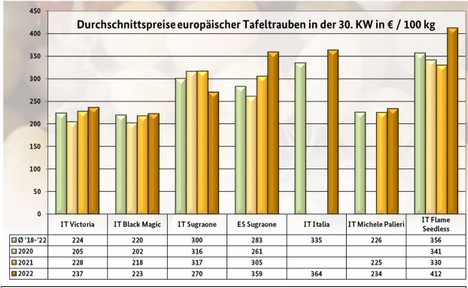 Apples
The European new crop continued to gain ground: Elstar arrived first, but these cost a hefty €2.40 per kg in Hamburg. Although the products were not yet completely convincing aromatically, sales were quite smooth already. Regarding imports from overseas, the New Zealand articles continued to predominate over Chilean ones.

Pears
South African imports outweighed Chilean ones, but both lost in importance. Products from the domestic market, the Netherlands, Italy and Belgium only had a selective, complementary character.

Strawberries
As in previous weeks, domestic lots dominated the scene. Dutch, Belgian and Polish goods mostly had a supplementary status only. Availability had decreased. The reduction in the assortment was not too tragic, however, as sales apparently diminished also.

Apricots
Turkish and French deliveries predominated. Products from Spain and Italy complemented the event. Shipments from Moldova and Poland completed the range. Local fruits were the most expensive. Austrian apricots appeared in Hamburg, costing €4 per kg.

Cherries
The presence of domestic and Turkish items was apparently limited. The season has obviously passed its peak. Complementary imports came from Poland, Belgium and Greece. Customers readily bought up items that were of the 28 mm caliber and up.

Peaches and nectarines
Spanish deliveries dominated, more so than Italian and French ones. Shipments from Turkey and Greece rounded off the range. Although availability was limited, demand was met without any major effort. Lower prices were observed in Hamburg and Cologne as stocks had built up.

Plums
Native batches predominated: Cacak's Schöne, Katinka, various Top varieties and Bühler Frühzwetschge formed the basis of the product range. Lepotica from several Eastern European countries had gained in relevance. Imports from Spain and Italy were of a complementary character.

Lemons
South African imports predominated over Argentinean ones. Imports from Spain supplemented the markets. Supply had become limited, but was still sufficient to satisfy the demand. Prices remained mostly constant.

Bananas
The supply was sufficiently matched to the sales. These had been limited in some places as a result of the vacation season as well as midsummer temperatures. Prices mostly remained stable.

Cauliflower
Local supplies were available almost without competition, with only occasional access to Dutch and Belgian batches. The heat noticeably limited the demand. It did not exactly aid the condition of the goods either. Here and there, stocks and deficient lots were the result.

Lettuce
Domestic offerings predominated over Belgian ones. In Cologne, a few Dutch goods appeared as well. Belgian batches were often discounted, so their price approached that of the German ones. Iceberg lettuce came from Germany and the Netherlands. Business was rather subdued.

Cucumbers
The assortment was composed of domestic, Dutch and Belgian shipments. The markets unanimously reported price increases, which were sometimes quite hefty. Supplies from the Netherlands stalled as a result of farmers' strikes, which in turn affected the prices of domestic produce.

Tomatoes
Dutch and Belgian deliveries clearly dominated the scene. Availability expanded and was sufficient to cover demand. Prices often trended downward, as demand was too weak. Belgian goods in particular were affected by price reductions.

Sweet peppers
Dutch batches outweighed Turkish and Belgian ones. Although availability was limited, it was sufficient to meet the demand. With business proceeding being subdued but steady, prices had a downward trend.