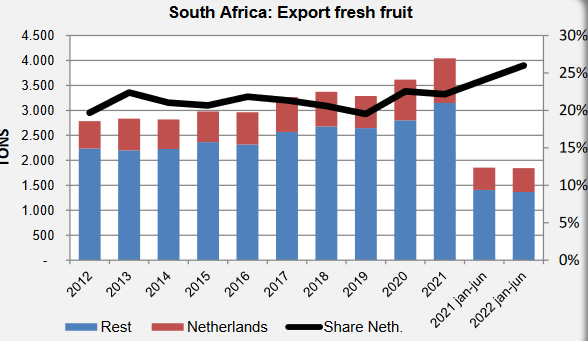 Other real growth markets for South African fruit are: Canada, Malaysia, the United States and India. Growing in the first half of this year, but not the years before are: China, Saudi Arabia, Bangladesh, Hong Kong and Iraq.

South Africa also exports quite a lot to other African countries; last year the amount reached almost 360,000 tons. In the first half of this year, exports to countries on the home continent grew by more than 10%. Less citrus and more apples and grapes. Over the whole year, oranges are South Africa's most important export product when it comes to fresh fruit. Followed at a distance by apples, mandarins, lemons grapes, grapefruit and pears. In the first half of the year, apples, lemons and grapes are the most important. Exports of grapes (+10%) and apples (+9%) fared particularly well; exports of lemons increased slightly (+2%) during this period.

On the contrary, citrus exports in the first half of the year were smaller than in the same period of 2021; oranges -29%, grapefruit -16% and mandarins -9%. However, exports of pears, plums and avocados increased in the first half of the year. The trend in exports to the Netherlands understandably shows the same picture, namely large increases for lemons (+67%!), grapes, pears, avocados and plums. South African exports of citrus (excluding lemons) to the Netherlands showed large decreases.