Women’s Day is a special celebration for United Exports, which strives relentlessly for gender equality, with some 61% of their permanent workforce and 83% of their seasonal employees being women. The OZblu® varietals (bred by top Australian breeder Dave Mazzardis) and their associated intellectual property has created an impressive number of jobs, particularly for women. United Exports and its growers in South Africa will collectively employ approximately 10,500 seasonal workers over six months for their coming harvest period, and an estimated 90% of these will be women. 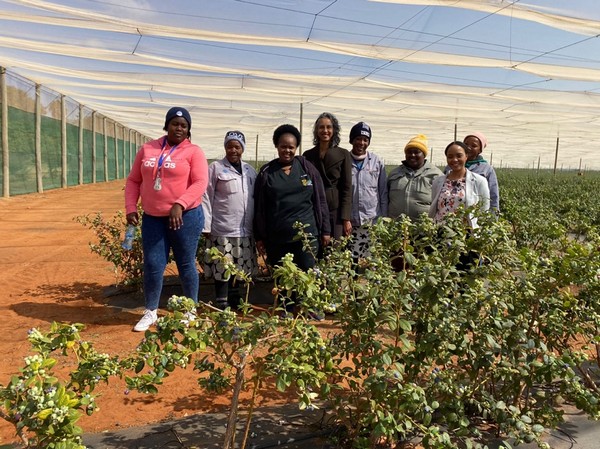 United Exports and several investors, such as the Development Finance Institutions, namely the World Banks’ IFC, the FMO of the Netherlands and IFU from Denmark, have invested more than 68 million USD in South Africa. The OZblu® blueberry exports generate significant foreign exchange earnings each year for South Africa. The social impact has been phenomenal, creating over 1,200 permanent jobs for United Exports and its contract growers – more than two-thirds of these permanent jobs are held by women.

Roger Horak, the company’s founder, says, “United Exports is very proud of the work it has done in terms of gender equality – and there is still work to do. With climate impact/change being a top priority for our business, it is often women who are leaders in caring for our planet. We need to embrace this talent.”

During her visit, Kamath said “It is great to see how the strong people-to-people links between Australia and South Africa underpin our growing trade and investment relationship to the benefit of both countries. I commend OZblu® breeder Dave Mazzardis, an Australian citizen, and Roger Horak, a naturalised Australian of South African origin, who are working in partnership to create a thriving export business that is bringing jobs and economic development to South Africa."