"Because of the abundant yield, we were able to offer German onions into June"

For the Hessian wholesale and service company Rainer Bausch Ltd, imported potatoes and onions now dominate the summer. "At the beginning of June, we increasingly switched to imports from Spain for table potatoes. I

would describe the quality of the imported goods so far as rather mixed," says Christian Bausch (r), the firm's Managing Director, who is also responsible for purchasing and sales at the company.

The Spanish early potato campaign is expected to last about two more weeks. In the meantime, the first early potatoes of this year's season are already being harvested in southern Hesse, and the stocks should look quite lush, according to initial information, Bausch continues. 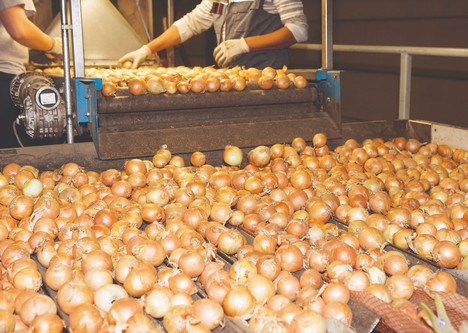 In addition to potatoes and onions, Bausch will also offer regional fresh garlic in about two weeks. After the season's end in August, dried garlic will be offered into January.

Winter onion harvest in the starting blocks
Meanwhile, the onion market is also dominated by imported goods, Bausch describes. "On behalf of food retailers, we are now mainly packing New Zealand onions. Demand is quite satisfactory for the current season." Compared to other years, the New Zealand campaign came relatively late this year. "Because of the bountiful yield, there have been German stored onions into the first week of June, while the last lots usually hit the market no later than mid-May."

The Hessian winter onions are now being cleared, so that in about three weeks it will be possible to switch back to mainly domestic produce, Bausch outlines the approaching seasonal change. "We can meet up to 80 percent of the demand for yellow onions with domestic produce. Red onions, on the other hand, are grown less in our area. There are about 200 tons available to us every year from regional cultivation, and the trend remains the same. At the same time, the demand is quite manageable compared to yellow onions."

Regional land development
In the wake of the wartime supply shortages of cereals, a switch on the producer side from potatoes and onions to wheat or other cereals cannot be ruled out in the state of Hesse either, Bausch said. "We will not yet see a decline in potato and onion acreage in favor of cereal production this year," he said. The price developments in the fall, i.e. at the time of the main potato harvest, will be decisive for the near future. Based on that, many growers will make their decisions."