With demand cooling from both the consumer and retailer segments, ocean freight spot rates between China and North America are seeing new lows.

“Ocean freight spot rates continue to drop fast. The SHIFEX index shows China to the U.S. West Coast has gone below $7,000 per FEU while China to the U.S. East Coast is moving downwards to below $9,000 per FEU. Consumer retail expenditure seems to be at a tipping point, inevitably reducing total volumes getting ashore. We expect this to push prices further down in the future,” said Shabsie Levy, CEO and founder of Shifl.

The ocean freight rates are intrinsically connected to the retail industry as it makes up over half of all imports into the country. While global container lines have tried measures like blanking sails and removing capacity from the market, falling retail demand has pulled down ocean spot freight rates.

“The issue of increased freight rates and inflation has been a major topic of discussion in the U.S. markets including the efforts by the U.S. Government and Congress who have been actively involved in trying to curb ocean freight prices including the recent passing of the Ocean Shipping Reform Act of 2022 (OSRA22),” said Levy. 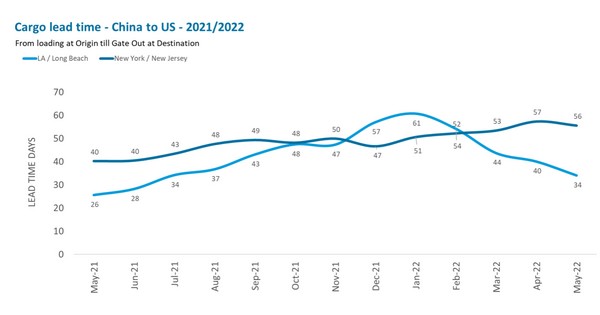 This aside, the growth of new import orders has also slowed down, which points to an extended period of volumes staying lower than expected. While it was anticipated that order numbers into China would pour in at high volumes with the loosening of restrictions in Shanghai, it was not to be, as it received a lukewarm response from shippers.

Vessel queues have drastically fallen across the ports of Los Angeles and Long Beach, with ship numbers dropping to 25.

The sheer number of disruptions to production in China due to the country’s strict COVID zero restrictions is another cause for a fall in Chinese volumes reaching the U.S.

“Our data indicates that the hike in interest rates by the Fed is another blow to consumerism, as other industries, including services and real estate, see a hit in fortunes. Mortgage rates going up significantly from last year can result in slowing house construction starts, further reducing related retail spending,” said Levy.