On June 22, Huelva opened the 7th edition of the International Berry Congress. The event was inaugurated by the president of Freshuelva, Alberto Garrocho, the mayor of Huelva, Gabriel Cruz, the president of the Provincial Council, María Eugenia Limón, the general secretary of Agriculture, Livestock and Food of the Government of Andalusia, Vicente Pérez, and the president of Caja Rural del Sur, José Luis García-Palacios. 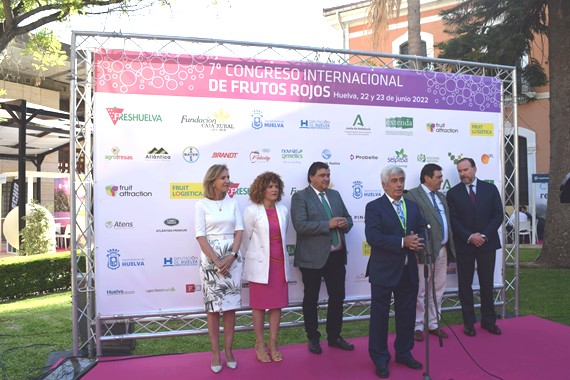 Garrocho highlighted "the return to normality" in the celebration of the event after two years of pandemic, in a year in which the campaign, now in its final stretch, "has been quite long and heterogeneous," and in which "difficulties have arisen every week both in the domestic and international markets." These have been the result of factors such as climatic adversities, the road transport strikes in Spain, or the continuous increase in costs.

As for labor, one of the factors which raise the sector's concerns each season, the president of Freshuelva explained that the pilot initiative for the recruitment of workers at origin in Ecuador and Honduras has been satisfactory, and they will continue with it after the interest shown by companies in the sector in participating.

The shortage of workers for such an important sector for the province is an issue to be solved. Garrocho pointed out that "our campaign has had a rather atypical end as a result of the high temperatures of the last 3 weeks, which have sped up the ripening of both blueberries and strawberries, and we have lacked laborers" to harvest all that production. "The labor supply is volatile and we have to try bringing people with contracts signed at origin" to have the security of having workers throughout the campaign, he said, recalling that Huelva doesn't produce just fruit. "We produce and export health and welfare."

Working groups: water and markets
Water resources in the province was another topic discussed at the inauguration and later addressed in depth at the working table "ODS: Efficiency of water resources". 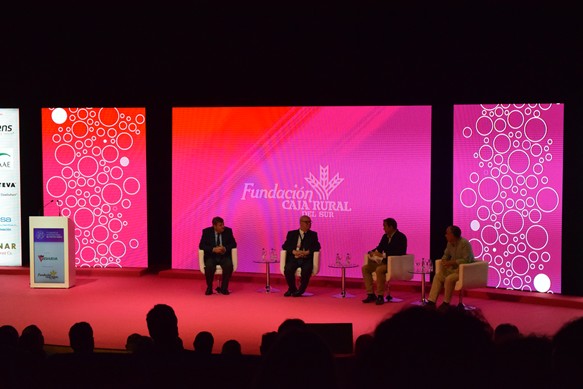 Both the moderator, Professor Francisco José Martínez López, and the speakers were categorical in assuring that Huelva "has sufficient water resources" for the implementation of irrigation systems for agriculture. Alejandro Rodríguez González, Water Commissioner of the Guadalquivir Hydrographic Confederation, and José Antonio Remesal Guijarro, Director of the Exploitation System of the Tinto-Odiel-Piedras Demarcation, gave an outline of the resources, infrastructure and projects undertaken in integrated water management in what is the southernmost basin in Europe; a model that is now being implemented in other European countries. In Huelva, it was defined by Remesal as "an example of efficiency in the use of water." The prospect is for works to be undertaken soon on the Alcolea dam and the San Silvestre Tunnel.

Martínez López said that: "3 out of every 4 square meters of our province have some type of environmental protection. Huelva's people have managed to protect our spaces, but unfortunately, despite these efforts, you often come across news putting our agricultural activity in a bad place, demonizing it absolutely unfairly in many cases." The fact, according to Juan Antonio Millán, president of the Association of Irrigation Confederations of Huelva, is that the province currently has 54,000 irrigated hectares, but the hydrological planning foresees the possibility of irrigating up to 89,000;" therefore, he insisted that work must be done to solve the problem caused by the thousand hectares of irrigated land in the northern crown of Doñana that were not initially included in the Plan, and for which "the sector is paying a very high cost. Our production cannot be constantly put into question, given the effort that is being made by our producers to align with the SDG's," said Martinez.

Ayman Zargarian, Horeca Division Manager of UAE-based Farzana, and Paul Smith, CEO of UK-based Smith and Sons Ltd. led the second panel discussion of the day, which focused on retail trends and opportunities for berries in the Arab and UK markets.

According to Zargarian, the main challenges for the export of berries to the United Arab Emirates lie in the capacity to offer competitive prices and the ability to guarantee the quality of the product during transport through temperature monitoring, since currently "there are products arriving with poor quality standards." He also said that "in my country, price is the most important factor, so you need a better pricing strategy, with flexibility to be more sustainable in our market."

For his part, Paul Smith opted to work with "small retailers and supermarkets that were not part of big chains," a sector in which more than 10 million English people continue to do their purchases today.

Technical presentations
The program of the first day of the congress was completed in the afternoon with the technical conferences, which showed the importance of research and the development of new solutions for the advancement and improvement of the results of the berry sector.

Both in pest and disease control and in nutrition, biosolutions took the spotlight of the various presentations. The list of solutions showcased included Andrematt's baculovirus for the control of caterpillars, Asfert Global's bacterial consortium, and the products of Antonio Tarazona, UPL, Atens or Seipasa. The effectiveness of these solutions was strongly backed by the results of the trials presented by the speakers, and they are also aligned with the community objective of reducing the use of pesticides by 50% and of fertilizers by 20% by 2030, which confirms that the berry industry is one step ahead in terms of sustainability. 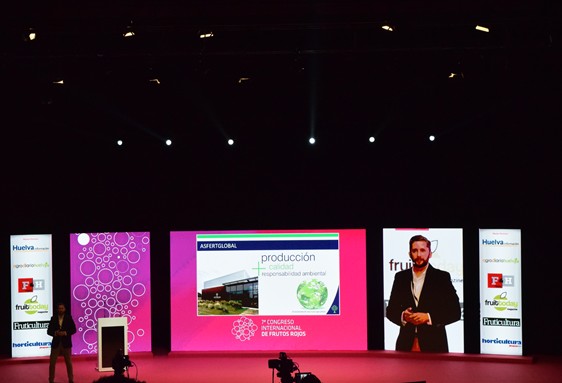 The progress in the development of technology for berries was also evidenced by the applications of electrostatic technology in berry cultivation from Herogra-Hispalense de Líquidos, used not only for the application of treatments, but also for assisted pollination - a technique that has already been tested in crops such as avocados, pistachios, pitahayas, almond trees and even watermelons -, or agricultural covers with optically active formulations by Cascade. 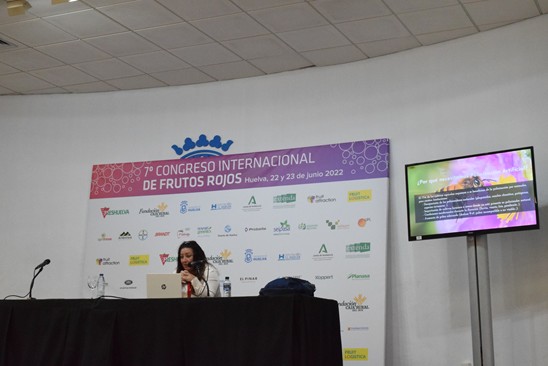 All of these are innovative solutions that lead to greater efficiency in the cultivation of berries and help increase yields. In his inaugural speech, Alberto Garrocho said that this is what is "turning Huelva into a global leader." The sector is committed to sustainability by relying on innovation, partnerships with technology companies and the adoption of the most cutting-edge tools for the preservation of resources. This is also where certifiers come into play, as they accredit and support companies that make the effort to produce fruit of the highest quality in a responsible manner. Certifications such as Spring or H2Agro help the entities committed to sustainable water management to stand out from the rest.