South Africa set for record citrus exports of 2.7 million tons in MY2021/22

South Africa is set for record citrus exports of 2.7 million tons in marketing year 2021/22 despite ongoing challenges. Favorable weather conditions, new areas under production, and higher demand  in premium markets, such as the United States, are driving the growth in exports. Duty-free exports of citrus to the United States under the African Growth Opportunity Act reached a historic high of 100,234 MT in 2021. However, several challenges are facing the industry, including, soaring input costs, especially fuel and fertilizer, a major surge in shipping costs, ongoing operational challenges at the country’s ports, and the impact of the Russia-Ukraine conflict on established trading patterns. As a result, profitability and the sustainability of the industry are under threat and could limit future investments.

Production
Grapefruit production is expected to grow by eight percent to 380,000 metric tons (MT) in MY 2021/22, from 351,043 MT in MY 2020/21. The summer rainfall season started normally in most growing regions with widespread rains that continued throughout the season, ensuring sufficient irrigation water, and providing conducive growing conditions that impacted positively on production. In addition, an increasing number of young trees started to bear fruit. 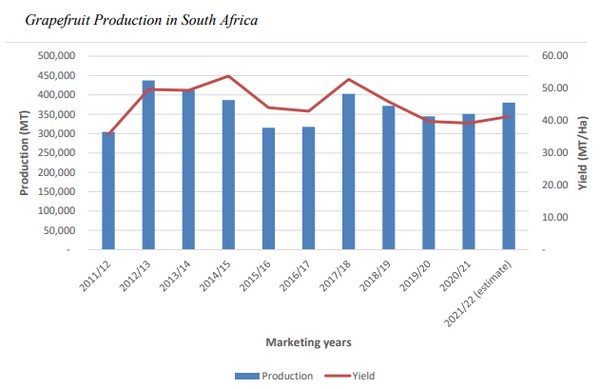