"In the herring season, our production goes up by four times"

There are fewer and fewer real peaks in the sale of sliced onions, but one that continues to persist is the time of the Hollandse nieuwe herring at Smit's Uien. "The 25 gram bags and the 1 kg cubes of onions fly out of the door during this period. Companies are all short of staff, so they order more sliced onions," says Raymond Mahieu.

According to Raymond, the herring season is a truly Dutch affair. "You also see it a bit in Belgium, Scandinavia and somewhat in Germany, but it is mainly a Dutch thing. There are stalls everywhere with flags to promote the new herring. The new herring is also growing in popularity among young people. With the Covid measures of the past two years, sales fell for a while because fewer markets were open, but overall people are eating more herring than a few years ago! 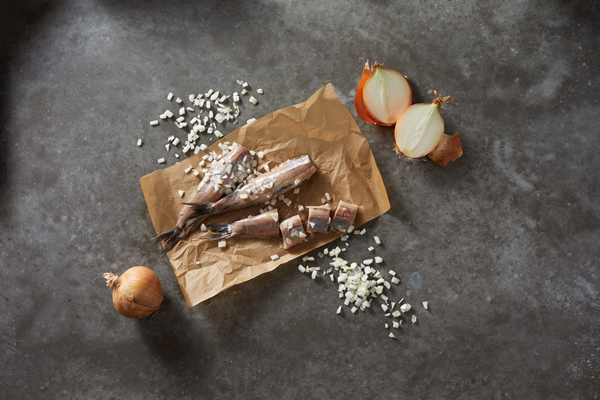 "People used to think that good herring could only come from fishmongers, but in recent years the box with two pieces of herring from the supermarkets has also become very popular. And we are the indirect supplier of sliced onions to many supermarkets," says Raymond.

In the more luxurious restaurants, the herring is sometimes garnished with red onion rings, but most herring is eaten the old-fashioned way, with a few bits of sliced white onions on top. Smit's Onions can therefore have fun for the next few weeks. "In the past, the peak of the Hollandse Nieuwe lasted six weeks. The biggest rush now is in the week before and the two weeks after the Hollandse Nieuwe started."