"Additional costs of up to 40% are hard to pass on, which hampers our operating results"

Tons of cucumbers and herbs of all kinds are now being harvested weekly during the peak season at Bördegarten's huge greenhouse complex in Osterweddingen (Saxony-Anhalt). "The volumes can be harvested as planned. That means we harvest about 40,000 400-gram cucumbers daily during the peak of the season, and for herbs, the daily quantity is 10,000 pieces of 120 grams. In total, up to 15,000 pots of herbs per day are harvested in the case of racers such as rosemary, basil, parsley, dill, chives, and mint," said production manager Jos Houwen on June 14.

Sven Schulze, Saxony-Anhalt's Minister for Economy, Tourism, Agriculture, and Forestry, Daniel Krake as SME representative of the Anhalt-Bitterfeld district, Andrea Voss from the Saxony-Anhalt Investment and Marketing Company, and Robert Fassauer from the Saxony-Anhalt Agricultural Marketing Company were among the people inquiring about the vegetable production in the greenhouse and the current state of affairs in the vegetable sector. "Products from the region and regional economic cycles are of great importance for creating value in rural areas. Here, the Wimex Group is already making an important contribution to the supply of fresh food and to greater sustainability," said Minister Schulze. 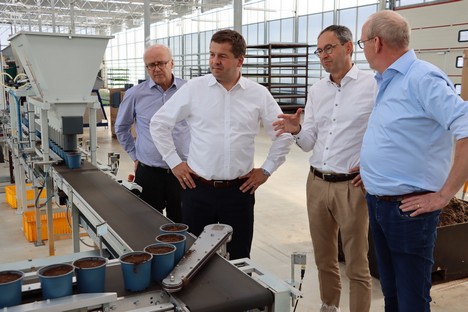 Sowing automatically, directly in the pots, at Bördegarten. Minister Sven Schulze (2nd from left) was impressed by the high-tech greenhouse just outside Magdeburg. Plant manager Jos Houwen and the two managing directors of the Wimex Group, Ulrich Wagner and Leopold Graf von Drechsel, explained the details.

About twenty skilled workers manage cultivation, care, and harvesting. They are supported by around thirty helpers who lend a hand. "Finding workers is one of the major challenges we face," reported Wimex Managing Director Ulrich Wagner. Complicating matters are the current cost increases, such as fertilizer, packaging materials, and minimum wage increases. "The additional costs in purchasing up to 40% are difficult or even impossible to implement in food retailing and thus burden our operating result."

Expansion potential in retail and gastronomy
Nevertheless, greenhouse products are being increasingly well received by consumers. Houwen: "Cucumbers are generally always in demand, but herbs vary according to the season: in summer, for example, mint is very popular, while in winter, dill, chives, and basil are more in demand. There is potential for expansion in the food service industry, with its wide variety of packaging ideas, as well as in food retailing, with laid goods in transparent PVC hard cartons. Also new this year are our mini cucumbers, which we added to the portfolio in response to customer requests, especially since it fits well with our snake cucumbers in terms of assortment."

Sustainability as a guiding principle
Before the end of the summer, Bördegarten's herb assortment will bear the official organic label of the EU. In Osterweddingen, plant manager Jos Howen and his team spent many months preparing for this: "There are greenhouse sections that are now reserved for organic production. The entire logistics and work organization are geared to this," reports the experienced specialist. Around a third of the area under glass is now organic. Parsley, basil, chives, and the like, which are sold in pots, thrive there. The certification of organic production was an important milestone, emphasizes Ulrich Wagner. After all, sustainability plays a major role at the Wimex Group.

The organic herbs are a pilot project that makes this clearly visible to the outside world. In addition, Bördegarten manages to produce vegetables in the greenhouse not only very efficiently and in a water-saving way but also in a climate-friendly way. This was confirmed by external certifiers with the product footprint of the Osterweddinger cucumbers: One kilogram binds 362 grams of CO2, so Bördegarten's cucumber production saves the environment around 919 tons of the gas every year. This is made possible by the controlled conditions in the glasshouse, which are created fully automatically with the help of sensors in terms of temperature, water and nutrient supply, fresh air, and shade. Thanks to these optimized living conditions, the plants feel so comfortable that plant protection measures are hardly necessary. 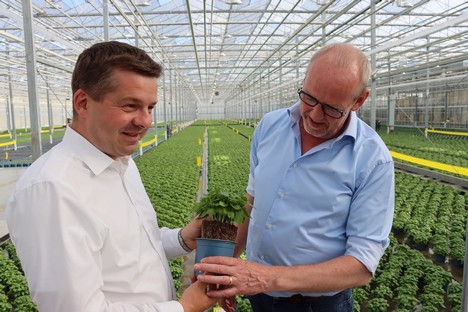 Basil is one of the herbs that Bördegarten will be bringing to food retailers in organic quality this summer. Minister Sven Schulze asked farm manager Jos Houwen about the special features of the conversion to organic production.

Production with full equipment
In 2018, Bördegarten, a subsidiary of the Wimex Group, took over the existing greenhouse facility in Osterweddingen. Nowadays, the company manages a 63,000 m2 glasshouse facility equipped with state-of-the-art technology. "We took over the production site at that time as non-productive and now produce with full equipment such as ebb and flow system for herb irrigation, shading, ventilation, CO2 supply, latest air conditioning technology and lighting in a wide range of wavelengths. Thus, we have been able to significantly increase our production capacity as well as product quality."

Now the glass area is to be significantly expanded, and the first steps towards realizing the project have been taken. Bördegarten is also currently examining new approaches - such as growing vegetables on tiers. "It is more important than ever to invest in research and development and to drive innovation. Vertical farming, for example, holds a lot of potential for food security," Minister Schulze emphasized. He expressly supported the local commitment also because it simply shortens the distances goods have to travel to food retail stores, thus benefiting climate protection twice over.