In response to requests from raspberry and blackberry growers, Tessara has developed Berrisys Fast, a fully recyclable sulphur dioxide-generating sheet, with only a fast release layer, activated at high relative humidity in order to protect these most delicate of fruit.

Blueberries are climacteric fruit and will continue to ripen after harvest and can be stored and transported for long periods, while non-climacteric fruit such as raspberries and blackberries will not ripen and need to be harvested at full or close to full maturity.

Elton Williams, research scientist and custodian of berries at Tessara, explains that with the successful development of Berrisys and Berrisys LITE for blueberries, Tessara has invested in various experiments since 2018 and has until now started working closely with local raspberries and blackberries growers in South Africa.

"Storage and transport periods on raspberries and blackberries are very short and this is due to the rapid deterioration, from fruit senescence and postharvest diseases," he says. 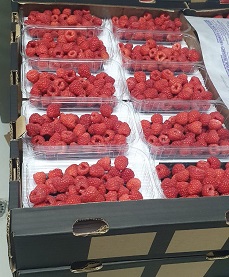 Major losses can be experienced and an entire pallet of fruit can be unfit for consumption and can therefore be rejected.

“We are in the process of releasing Berrisys Fast into the market that contains the same active ingredient, as our popular Berrisys and Berrisys LITE for blueberries, but it differs from these products in terms of the time frame."

The idea is to develop a product for short term protection against postharvest diseases during storage and transport, without negatively affecting other quality parameters such as the natural flavours and colour, he adds.

Whereas Berrisys and Berrisys LITE are dual-release laminated sheets which release an initial higher amount of SO2 over 24 to 48 hours, followed by a lower dosage offering 30 to 42 days of protection, Berrisys Fast only releases SO2 during the first 24 to 48 hours.

Precise concentrations and particle sizes of the active ingredient control the gas concentration and active period of the fast release layer. The fast release layer disinfect the surface of the berries, by releasing a large enough dose of sulphur dioxide to kill and eliminate any actively growing Botrytis (grey mould) fungal spores and to offer immediate protection over the three to four days of airfreight transit or during the storage period. 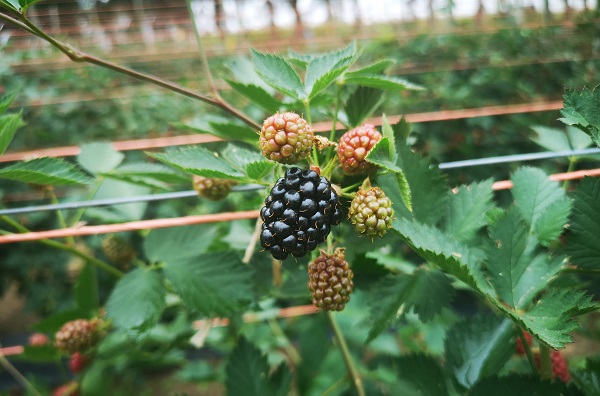 Shelf life extension of a day and a half
Elton points out that raspberries and blackberries have an exceedingly short shelf life and postharvest losses due to Botrytis can be devastating. Sulphurous acid is formed when SO2 gas reacts with water. Sulphurous acid reacts with the cell membrane and block enzymes of microorganisms and therefore inhibits the multiplication of micro-organisms present on the surface of fruit. While other packaging solutions may delay fruit respiration while the packaging remains intact, the moment conditions change, any spores present will inevitably continue its life cycle.

Moreover, given logistical uncertainties for example temperature fluctuations which are at times an unavoidable reality and can thus lead to condensation within packaging, inviting the development of mould on fruit. The only certain way to protect fruits is by destroying the viability of spores in the first place.

Gerhard Slabbert, Berrisys global product manager, observes that in the current challenging trading environment, it is imperative that berry growers investigate all possible avenues to safeguard the quality of ephemeral products like raspberries and blackberries. “We’ve had great success in our trials of the Berrisys Fast, while an independent trial in Australia has replicated our results: with Berrisys Fast it is possible to obtain an extension of a day and a half in shelf life,” he says. 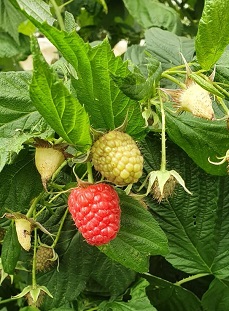 Tessara’s initial focus will be on South African-grown raspberries and blackberries, two categories that have been more under the radar than blueberries, but which have witnessed a steady growth in exports, mostly to the United Kingdom, followed by the Middle East.

For the moment, regulations in the EU governing the use of sulphur dioxide hold back its introduction to raspberry and blackberry growers, but Lionel George, head of regulatory and compliance at Tessara, notes that the company has approached the relevant authorities for amendments to the regulatory framework which they expect could take up to two years.

The argument in favour of sulphur dioxide’s salient ability to preserve fruit quality and thus reduce food waste is incontrovertible, the company maintains, and it is pursuing regulatory registration trials of Berrisys and Berrisys LITE for blueberries in the USA and Australia. 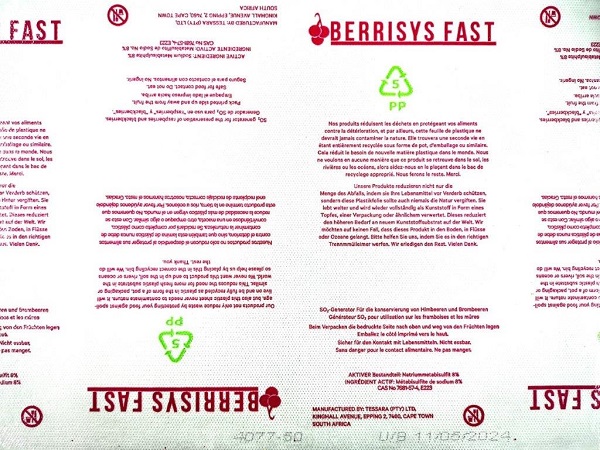 The past season offered a trial by fire for Berrisys on blueberries: it was clear that berries sent under a Berrisys regime handled the huge delays much better than those without. Elton observes that one of their clients had blueberries in transit for an extended period due to delays and nevertheless still managed to sell most of that fruit. He remarks that none of their trials had ever run for such a long period of time.

“Realistically, we have to plan for the impact of longer storage periods with the holdups at harbours, both here and on the receiving end,” he says.