Peaches, nectarines and paraguayos have remained popular across the globe this season, which many markets reporting that this sustained demand has allowed prices to remain high enough to offset the higher production costs many growers are having to deal with. Only Switzerland seems to suffering from a lack of demand, although for many of the European production regions it is still early in the season and prices could drop as more supply comes onto the market. For now, however, the outlook for many is optimistic. 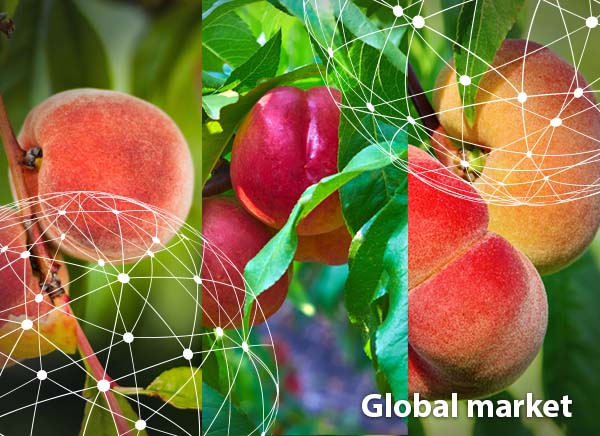 The Netherlands: Reasonable prices for Spanish stone fruit
According to a Dutch importer, Spanish stone fruit can look forward to reasonably good demand. "Last week it was a bit busier than now, but we can't complain. Prices are at a reasonable level. Significantly lower volumes were announced. Now, that varies considerably per supplier, but I still foresee enough stone fruit on the market. There are enough peaches on the market. Prices are at a good level. Large sizes are not yet available so many peaches are packed in the 10x1 kg format. I think the prices are still reasonable with a level around EUR 6.50-7 for the large sizes, EUR 6-6.50 for size 28 and EUR 5.50 for sizes 30-32. The price of the packed peaches is around 11-12 Euros, but they come in at 14-15 Euros. The price of nectarines is a bit higher across the board, but they are also a bit less. For paraguayos, the prices for the best sizes (double A) are around 10 euros, the A's around 9 euros and the B's around 8.50 euros. The doughnut packaging (10x500 grams) sells for around 8.50-9 euros."

Belgium: Good demand, but lack of larger sizes of stone fruit
On the Belgian market, there is enough volume of peaches and nectarines for the moment. “Despite the forecasts due to the stormy weather, there is still enough to come to Belgium," says a Belgian trader. "However, these are mainly the smaller sizes. The number of large sizes is slightly more disappointing. The demand has increased significantly in recent weeks. The beautiful weather of recent weeks has done this extremely well, so that we can speak of good prices for both products".

Germany: Noticeably higher prices than in previous years
The predominantly Spanish deliveries of nectarines and peaches to the German market have apparently increased this season. Italian batches followed in terms of importance, but overall they played only a small role. The first French offers were also entering the market at €4.- per kg in northern Germany, which means they were at the top of the range in terms of price. Turkish imports have so far only been found in southern Germany, the first Greek deliveries are expected in week 24. In general, demand could not keep up with the expanded availability. The prices were noticeably higher than in previous years.

Switzerland: Tough start to the season
According to a Swiss importer and retail supplier it has been a tough start for the Spanish stone fruit season so far. "Demand could be better, but what is bothering us most is the poor quality caused by heavy rainfall in the Spanish growing regions. The brix value of the first Spanish nectarines, for example, was far below the preferences of modern consumers."

France: Large volumes and dynamic consumption
The French production of peaches and nectarines this year amounts to 200,000 tons, close to its normal potential and thus a marked increase of 20 % compared to 2021. In Languedoc and Roussillon, this year's frosts had little impact. Roussillon was relatively spared. The orchard load is reduced, with light thinning. Yields are higher than last year. A replanting dynamic seems to be taking place in the basin. In PACA, the frost caused little apparent damage to the orchards. Production is higher than in 2021, but 8% lower than the five-year average, whilst the surface areas remain stable. In the Rhone Valley, the impact of the frost was less significant than last year, as it was mitigated by the wind and cloud cover. The Baronnies and the Eyrieu Valley in the Ardèche are nevertheless the areas most affected.

A level of production that should allow the French industry to achieve a good campaign 2022, a year marked by a strong earliness and an entry into the campaign with relatively large volumes. The range of the four colours (yellow and white peaches and yellow and white nectarines) is complete in all French regions.

On the market side, the weak Spanish competition benefits the French fruit and the good weather conditions have allowed a very good quality of the products while favouring the demand. Sales of peaches and nectarines accelerated last week and operations to boost sales will be set up next week in most French retailers.

Italy: Demand higher for peaches and nectarines higher than supply
A major Italian operator says that the quantities of peaches and nectarines are still low, especially the nectarines in both southern and northern Italy. The full harvest of the Big Bang variety started a few days ago, so volumes are expected to increase. Demand is currently high and not fully satisfied. With the arrival of larger volumes, the product should be able to be placed without problems due to low supply from Spain.

At the moment, prices are good. For peaches there is a good balance, nectarines have prices 20 cents/kg higher than peaches. The coming weeks will be confusing due to the fragmentation of supply and production areas. Northern and southern areas coincide in terms of ripening due to very high temperatures in the South that compromise size and firmness. There are good hopes for July and August.

According to data, 69.5% of Italian households have bought peaches at least once (fixed or variable weight) in the last 12 months ending April 2022. The purchase frequency is also interesting at 7.7 average purchase acts per year per household, with an average purchase per act of 1.34 kg.

Spain: Good prices outweigh increase in production costs for Spanish growers
The Spanish peach, nectarine and paraguayo season has already finished in the early producing areas such as Seville and Huelva. The campaign has been marked by good demand in European markets, so prices have remained at a good level, and the final result will be positive even though the production costs increased 30%. Murcia is now in the final weeks of its season, with a harvest reduction of around 20% and Extremadura is now in full swing with normal volumes. In this region growers tend to switch plums- the main crop in this area- for nectarines and paraguayos. So far, the growers and exporters from these regions report a good demand and prices that are covering the raise of costs and bringing good profits. The first peaches and nectarines are also starting to be harvested now in some early areas in Catalonia, where the production will be reduced by about 70% and stand at 166,910 tons. This will be the second consecutive year in which weather incidents have seriously affected the Catalan production. The frosts at the beginning of April ruined a large part of the production, as well as in the region of Aragon where about 60 to 70% of the harvest has been lost. This was the most severe frost in the last 40 years. Also, in April (on the 20th and 23rd), 2 hail storms damaged some productive areas. The first one did not cause significant damage, but the second one affected about 500 hectares in Catalonia. Both Catalonia and Aragon represent more than 70% of the Spanish production. Therefore, there will be for yet another year, an imbalance between supply and demand from mid-June onwards. There will be much less supply of peaches and nectarines and the price is expected to remain high. For this reason, large distribution operators should have been planned their orders well in advance this year in order to have enough product on their shelves.

North America: High prices to offset increase in production costs
Stone fruit supplies are strong right now as we head into the heart of the season out of California.

One grower-shipper is finishing up apricots in about 10 days but are continuing with production on yellow-fleshed and white-fleshed peaches and nectarines and plums.

“There are similar volumes to last year as an industry,” he says. “We are between seven to 10 days ahead of last year which is more in line where the normal timing should be.” The grower-shipper has a longer season which begins the last week of April and has fruit available until the last week of October. “We have a lot of late yellow peach varieties that come into production in September and October so it’s fresh fruit, not storage fruit,” he says.

Sizing also seems to be developing. The season started off with fruit approximately one size down from where the grower would normally like to see it. “But the sizing is improving as we get into the mid-season varieties. We’re now in line with where historic trends normally are,” he says, adding that sugar levels and flavor are also at optimum levels right now.

While California is the largest state that produces stone fruit, there is also regional production from Georgia, South Carolina, Virginia, New Jersey, Colorado, Washington and British Columbia, Canada. “Some regions like Georgia and South Carolina are producing some volume right now but their production is down due to weather impact that they had during the winter. That’s making our season a little bit more appealing,” says the grower-shipper.

And while pricing has been stable since the start of the season, pricing is stronger than last year, partly to absorb the additional production input price increases that the industry has seen. “Pricing is maintaining some stability through the first few months of the season. We’re hoping to continue holding that pricing stability,” he says.

Looking ahead, he expects volumes to increase dramatically on yellow peaches and yellow nectarines in the coming weeks and says retail promotions will start building for the July 4th holiday. He hopes promotions continue from there throughout the season.