The predominant Spanish deliveries of nectarines and peaches expanded. Italian batches followed in terms of importance, but played only a minor role overall. The first French offers supplemented the events and, at €4 per kg in Hamburg, took the top spot in terms of price. According to the BLE, Turkish imports have so far been found exclusively in Frankfurt. In general, demand could not keep pace with the expanded availability. Tariffs were noticeably higher than in previous years. 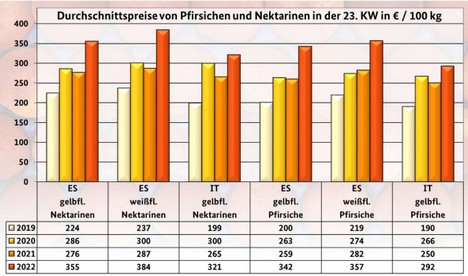 Surpluses could not be avoided, so traders lowered their previous demands across the board, but this did not always improve sales. Stocks and a rather inconsistent quality associated with them then sometimes caused a wide range of valuations. Mainly yellow-fleshed fruits were affected. The first Greek deliveries are expected in week 24.

Strawberries
Local offers dominated the scene, Polish, Dutch and Belgian completed the assortment with very small quantities. After the Whitsun weekend, a certain customer saturation could not be denied in some places, and here and there, the accommodation possibilities lagged behind the availability.

Apples
The European supply was limited: especially domestic Elstar and Jonagored lost relevance, but also the importance of Italian Braeburn and Pink Lady as well as French Jazz was limited. The interest in the alternative products was not particularly lively. In the area of newer offerings, supply obviously increased.

Table grapes
Italian batches now apparently dominated the markets: The presence of Black Magic and Victoria obviously expanded. This had a direct impact on prices, which dropped across the board. The increased emergence of European produce caused interest in overseas produce to shrink noticeably.

Apricots
Spanish deliveries predominated, with Italian and French following in almost equal numbers. In addition, there were Turkish imports, especially in Munich. The first Greek Lillycots also appeared there. In Frankfurt, the first local fruit was available: customers were expected to pay €24 per 5 kg crate.

Cherries
The assortment expanded quite strongly, because the supplies from Spain, Greece, Turkey, Germany and Italy grew strongly. Quite high-priced French fruits completed the event in few quantities. In general, demand rarely kept pace with the expanded supply situation.

Lemons
Spanish shipments had limited slightly, but they continuously characterized the scene. South African and Argentinian Eureka left nothing to be desired in terms of quality and increasingly gained market share.

Bananas
In general, supply was sufficiently matched to accommodation. Demand could usually be met without major efforts. Nevertheless, prices changed in some places, albeit only on a small scale.

Cauliflower
Domestic produce predominated and was available locally as a monopoly. Belgian and Dutch products were at most of a supplementary nature. Demand was not particularly strong and could easily be satisfied.

Lettuce
Lettuce came in almost equal parts from Germany and Belgium. Iceberg lettuce came mainly from Germany and subsequently from the Netherlands. In the case of colorful lettuces, it was mainly possible to access domestic offers. Overall, trade was fairly quiet.

Cucumbers
Domestic snake cucumbers dominated the market, with Dutch and Belgian deliveries completing the picture. The quality was generally convincing. Nevertheless, the majority of prices tended downward. The reasons for this were insufficient customer demand, an overly abundant supply and promotions by food retailers.

Tomatoes
TOVs tomatoes obviously dominated and came mainly from the Netherlands and Belgium. These two countries also set the tone for round tomatoes and cherry tomatoes. Deliveries from Germany, Italy, Spain, France and Poland were at most of a supplementary nature.

Sweet peppers
As before, Dutch shipments dominated. Turkey provided only green and red items. Belgian batches supplemented the action, and domestic and Spanish rounded it out with very small quantities. Marketing was slow in general.