The view of the market by José Tomás Quezada, commercial manager of Pacific Nut Company Chile, after his experience as moderator at the Congress in Dubai.

In mid-May, the International Nut & Dried Fruit Council (INC) Congress was held in Dubai. The commercial manager of Pacific Nut Company Chile, José Tomás Quezada, was part of this event as moderator of the round-table on prunes, raisins and cranberries.

After speaking with leaders of the producing countries, among others with Donn Zea, executive director of the California Prunes Board, regarding prunes, he summarizes that the industry looks healthy, with a good supply-demand relationship, without overstocks 3-4 years ago, which has led to good prices, "close to their ceiling". 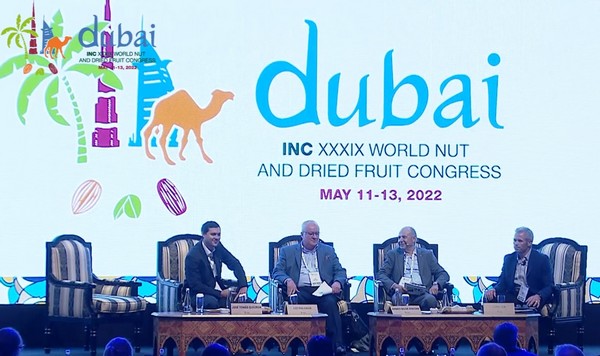 “Due to climatic (France) and structural issues, global productions have fallen, resulting in markets clearing lagging stocks, and where supply and demand have met at a healthier point; what we produce is sold, and with prices almost double last year,” he says.

Likewise, neither the inflation in Ukraine, nor the logistical difficulties in China due to Covid-19, nor the Russian war – modify the estimates for the 2022/2023 season, which speak of an equally good period. That is, a production of 175,000 metric tons (MT), a stock from previous periods of 31,153 MT for a final offer for the period of 206,153 MT, which should be consumed in its entirety despite its higher price.

In this last figure, a drop in consumption is already contemplated, since in the 2021/2022 season it reached 215 thousand MT. The lower quantity of prunes is not the only thing that affects higher prices for the final consumer, but also the rise in freight rates that can multiply prices by two and more.

One effect of inflation has been an increase in spot purchases, in smaller quantities, and not purchases for a whole year, says the executive. But even so, everything has been sold.

Regarding the war, Russia has had a hand: this country that was the main destination of Chilean shipments, now in times of war it is laying down by supplying prunes almost exclusively from Serbia.

Main producers
Regarding production, the United States maintains first place both in the season that has already ended and in the projection for the 2022/2023 period, with a high internal demand represented by young people who like healthy living and sports.

Chile is the second producer and continues to be the main exporter given its very low internal demand, while France, a historical third global producer of prunes, could lose its position at the hands of Argentina, due to frosts that affected its plantations a few weeks ago.