British Columbia (BC) grows about 95 percent of all cherries grown in Canada. It is the latest cherry growing region in North America and this year, harvest starts even later than normal. “We’ll start about 10 days later, around July 10 instead of the normal July 1 date,” says Julie McLachlan with Jealous Fruits. Production starts with the Santina and Cristalina varieties that are grown on some of the company’s earliest blocks in the valley.

“When harvest of these varieties kicks off around July 10, volumes will be light. They won’t ramp up until the end of July when the Lapin variety comes into production,” she commented. From then on, Jealous Fruits expects to have a full production volume until the season finishes, around September 10. 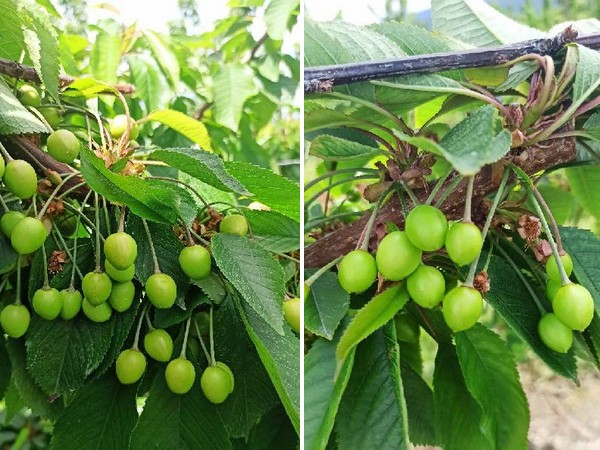 Regina cherry variety on the left. Harvest of this variety will start late July for four weeks. Staccato variety on right will be harvested between August 15 and September 10. Photos taken June 11.

Bigger fruit size
The later start of the season is caused by cool weather in spring. Low temperatures delayed bloom with some blocks not finishing bloom until the last week of May. Pollination was good and as a result, the later bloom time didn’t adversely affect the crop, it just delayed maturity. The province expects a crop size that is about 75 percent of what they had initially projected. “However, the fruit is really sizing up nicely,” shared McLachlan. “Last year, the crop volume was high, but the cherries were small in size. This year, the crop is forecast to be smaller, but the fruit size is expected to be bigger.”

Moon Festival
According to McLachlan, it will be healthy for the market to start harvest late. “A later start means there will be less overlap with Washington state,” she said. The majority of the BC crop will hit the market in August and September, a great window as very little competition will be left in the market. An additional benefit is that China’s Moon Festival will be early this year, on September 10.

“With our harvest being so late, we will be able to send cherries to China by air for this important event.” McLachlan expects strong demand for BC cherries. “Most likely, a higher volume of cherries will be shipped overseas this year compared to last as the airfreight situation has improved and the size profile is expected to be very well suited to export markets.” The main offshore markets for BC cherries are China, Southeast Asia, Europe and the Middle East. Closer to home, cherries for the Canadian and US markets are distributed by truck. “We are confident we will be able to secure truckers, but the cost is the unknown.” Uncertainty also holds true for sea freight. “Worldwide, there are so many delays. We will just have to react as we get closer,” she said. 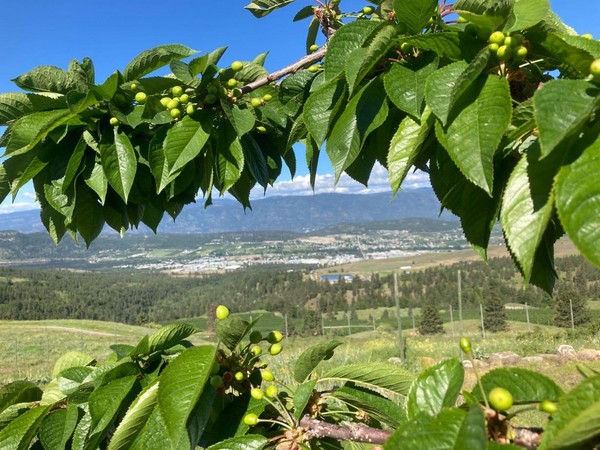 View of Lake Country from Eldorado.

Improved labor situation
Although cherry harvest for BC is still far out, the industry is cautiously optimistic about the upcoming season. It is perfect cherry weather now with temperatures between 20 and 24°C. In addition, the labor situation seems to have improved. “We are in good shape labor wise as we’ve been able to increase the amount of people coming in from Guatemala and Mexico,” McLachlan shared. There is also more interest from Canadians to help pick the fruit and the global working holiday visa program started back up, after a hiatus during the pandemic. “There is very good interest to work on our farms during cherry harvest. At the moment, about 20 percent of the workforce has arrived with the balance coming in late June/early July.”