"In honour of James, the Red Sienna Pride was named after his daughter, Sienna."

The owners of an Australian variety of red pear are expanding its volumes year on year as demand and popularity grow - but there is much more to the story behind the fruit, beyond its great colour and eating experience.

The initial plantation of The Red Sienna Pride Pear was 10,000 trees and the first commercial crop was harvested in 2019. GV Independent Packers Chief Business Development Officer (CBDO) Christian Georgopoulos explains that the company is currently continually planting trees every year.

"We are the exclusive grower as we own the IP variety," he said. "Volumes were low this season, due to the immaturity of the trees. We are planting new trees every year to keep up with the demand and present a lengthier supply in the market." 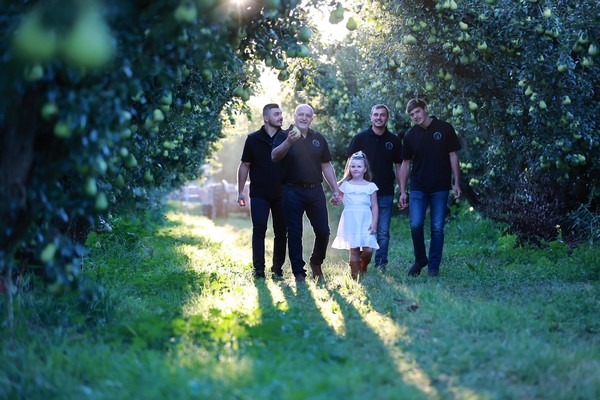 Photos: The Georgopoulos family among the pear orchards, from a Coles photoshoot

"James was heavily active in going to conventions and conferences, meeting people within the orcharding industry and growing his ideas," Christian said. "In 2014, James welcomed his daughter into the world. But in 2015, the family was shocked as James was diagnosed with bowel cancer at the age of 24. James passed away in March 2016 shortly after his 25th birthday, leaving both GVIP and James’ young family with a huge loss. In honour of James, the Red Sienna Pride was named after his daughter, Sienna. Now almost five years old, Sienna is a bright and bubbly girl that loves showing off ‘her’ pear. James has left the company a living legacy with the Red Sienna Pride representing more than just a piece fruit, as it is sold with a meaningful story in regards to the importance of Bowel Cancer awareness, in which GVIP as a company continually supports Bowel Cancer Australia on a yearly basis." 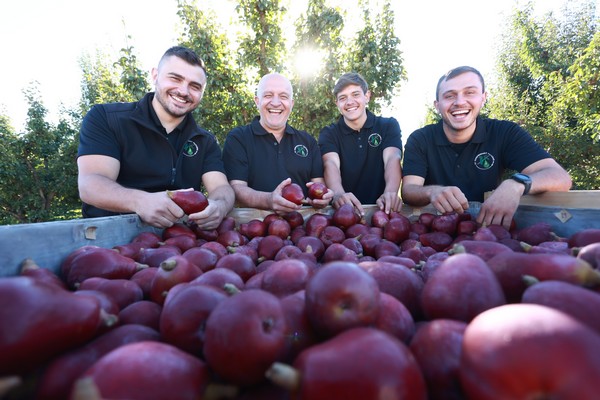 Domestically Red Sienna Pride is exclusive to Coles supermarkets national wide, but GV Independent Packers says given the limited supply currently, you will only find these in selected stores. Internationally there have been small volumes into South East Asia with great feedback and positive eating experiences, resulting in good demand for Red Sienna Pride Pears. Mr Georgopoulos says the ability to stand out on the shelf is due to the first eye-catching moment of the pear.

"It has a very unique shape," Mr Georgopoulos said. "Traditionally we see pears with quite a perfect shape and thin stem, whereas the red sienna has a thicker stem which gives it a bolder look from the top down. The skin is very vibrant and reflects light really well on the shelf. Tasting wise it is a lot sweeter than a traditional red pear and contains a juicy texture that you will experience on your first bite compared to a traditional green pear. It eats well and we believe it has a unique taste amongst all pear varieties that the consumer can experience. Given the tree plantings are still young, volume is still low though with continual plantings every year, the volume issue should improve over the coming years with maturity of the trees."

GV Independent Packers is a family-owned business built across five generations. First-generation commenced orcharding in 1948 in the Goulburn Valley and today GVIP grows over 1,800+ acres of orchard with several varieties of pears, apples and stone fruit. We are fully integrated throughout the whole supply chain – we grow, store, pack, market and transport all of our products and during the peak seasons, GVIP can employ over 300 staff. GVIP’s director, Chris Georgopoulos and his three sons Christian, Travis & Alexander run the business across all aspects of the supply chain. GVIP has strong domestic and international relationships with a strong exporting background for over 40+ years. 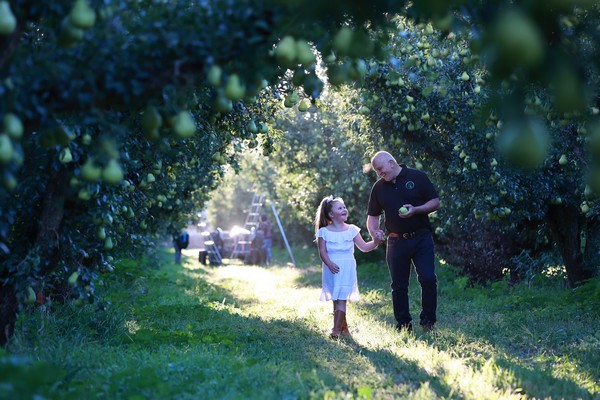 Mr Georgopoulos added that the company has experienced a lot of positive feedback from consumers, with several chefs sourcing them to use in cooking, particularly cakes and salads.

"Their feedback was based around how eye-catching it was on the shelf and how it tasted so sweet for a red pear," he said. "They highlighted its ability to be used fresh in dishes like a salad and its versatility in cooking desserts, especially French-based desserts. The feedback around how they ripen well in fruit bowls was also positive to hear, as many pear growers continually aim to educate consumers on the best way to eat a pear and that is to ripen it correctly – so in this context, if the pear ripens easier, this gives the consumer a better eating experience in our eyes. We also received some comments about how juicy the pear was and how Mothers found this easier to feed to younger children, which was something we never considered to be important but in context it is, as now the consumer is faced with a hard pear on the shelf, which makes it tougher to feed to a younger child."