“Cultivated sweet potato areas will decrease significantly this year, about 40%”

The Egyptian sweet potato season is starting and due to the very challenging season in the previous year, acreage has decreased by 40%, says one Egyptian produce exporter. Costs have increased significantly, which in turn has had an effect on the demand.

According to Reda Ezz, founder of Egyptian produce trader All Fresh Egypt, the sweet potato season started out as an uncertain one, given the challenges of the previous season: “Farmers in Egypt began cultivating sweet potatoes amid great fears of market stagnation in Europe, as happened last season. It is noteworthy that last season there were insane increases in the prices of fertilizers and pesticides, as well as the prices of packaging materials and the prices of internal transport and sea freight, and the amazing thing is that these increases will not stop. Things have been made even more difficult due to the ongoing war between Russia and Ukraine.”

Currently, these increases in costs has resulted in lower demand for sweet potatoes, Ezz explains. “The demand is very quiet, as the consumer prices are high due to transportation cost and packing materials got more expensive. The price of shipping a refrigerated container to European ports has reached 4000 dollars, and the price of a 6 kg carton box has reached 0.80 euro, and the rises are still continuing without showing any signs of stopping soon. Sweet potatoes are considered among the export crops in the first place, especially imported varieties such as Beurgard, Bellevue and Evangeline, so farmers have shown great interest in this crop in the past years.”

Due to the challenges of last year, farmers have opted to go for different crops this year, says Ezz: “However, it is expected that the cultivated areas will decrease significantly this year, about 40% in comparison to last year. This is due to farmers not achieving any profits last season, as the cost increased without an equal increase in the selling price of the product in European markets. This made farmers look for other crops that would generate better income for them and their families, such as Egyptian cotton and rice.” 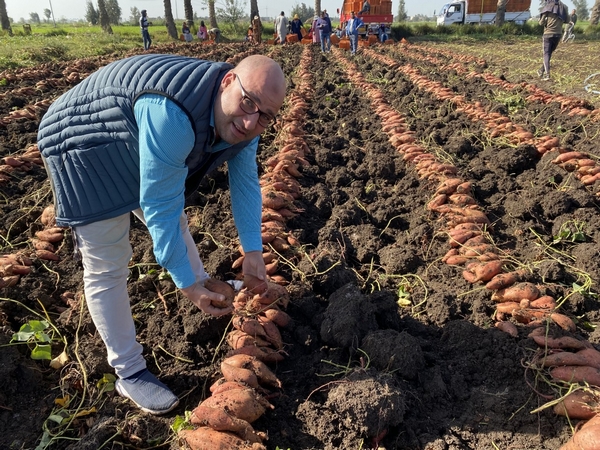 Ezz states that, as they’ve done before, they’ll be testing a new variety of sweet potato this year. All Fresh has exported nearly 5,000 tons of sweet potatoes during the 2021/2022 season. “We’re interested in exporting sweet potatoes to all European markets. All Fresh is considered a pioneer in introducing new varieties every year. We started cultivating the Beaugard variety, and the Bellevue and Evangeline varieties were tested, which succeeded in cultivation in the Egyptian soil in terms of production and quality. The cultivation of these two varieties will be expanded in the 2022/2023 season, and a new variety Orleans will be tested this year.”