Although their presence was noticeably reduced, South African imported pears dominated the scene by a wide margin. Williams Christ, Packham`s Triumph and Rosemarie lost relevance, while Forelle gained in importance according to retailers. Shipments from Chile and Argentina followed in terms of importance, but their availability was equally limited. However, demand could still be met without difficulty. 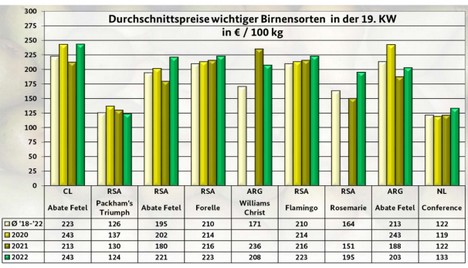 Prices did not change significantly. In some places, distributors lowered them slightly, either for volume reasons or to intensify marketing. However, rising prices could also be observed from time to time. In Munich, the price of Abate Fetel from Chile rose to such an extent that subsequent sales slowed down. Dutch and Belgian batches supplemented the business locally, as did Turkish products that were being phased out. The quality in this sector was mostly still convincing, so that sales mostly proceeded on a steady course and at the previous prices.

Apples
Local alternative products still predominated, but their importance diminished. Imports from the southern hemisphere were mainly Royal Gala from Chile and New Zealand. Chilean Elstar and New Zealand Cox Orange played an important role in the assortment, and their presence had increased somewhat.

Table grapes
South African goods dominated over Chilean and Indian fruit. It was mostly Thompson Seedless and Crimson Seedless that was being sold.. Imports from Peru only had a complementary status. Availability had noticeably dropped. But demand was also noticeably more restrained than before.

Strawberries
Deliveries from Germany had increased noticeably. In particular, free-range goods gained in importance. Dutch supplies followed in importance, but played a greater role mainly in Berlin and Hamburg, while they were completely absent in Munich.

Lemons
Spanish Primofiori from the previous harvest as well as Verna dominated the market. Prices often went up slightly, triggered by the recent offers from Spain.

Bananas
Sales were limited on various occasions. Nevertheless, supply and demand often balanced each other out. Prices often remained at previous levels.

Cauliflower
Domestic batches dominated. The presence of Belgian and Dutch batches expanded, while the importance of Italian and especially French products had waned. All in all, availability dropped a little.

Lettuce
Regarding iceberg lettuce, Spanish items predominated, but their season was slowly entering the last phase. Domestic and Dutch products, on the other hand, grew in importance. In lettuce, Belgian and domestic lots shared the action. Italian deliveries completed the picture.

Cucumbers
The cucumber offers were exclusively domestic Dutch and Belgian. Although supplies had become limited, demand was still met without difficulty. Demand was not particularly strong.

Tomatoes
There was movement in the assortment: Moroccan, Tunisian and Turkish imports disappeared almost entirely from the range, and Italian and Spanish deliveries also dropped to a lower level. Domestic fruits also played only a minimal role. The product range was dominated by Dutch and Belgian offerings.

Sweet peppers
Dutch offerings dominated, with Turkish and Belgian goods coming next in terms of importance. The presence of Spanish batches decreased immensely, that of domestic items had hardly changed. Marketing was uneven and prices developed accordingly.

Asparagus
Domestic shipments dominated the scene by a wide margin. Availability outstripped sales. Demand had, after all, considerably reduced after the Mother's Day weekend. To work around or resolve stocks, traders often had to reduce their prices. At times, the discounts also turned out to be quite large.