The Spanish new potato season is already starting with consistent volumes in the early producing areas located in the south. Sales are starting with high prices due to lower yields in the region of Murcia, which has been affected by abundant spring rains.

Patatas Meléndez, the leading company in its sector in Valladolid with a 20% market share in Spain, has started the harvest campaign of this tuber in the provinces of Andalusia and Murcia. 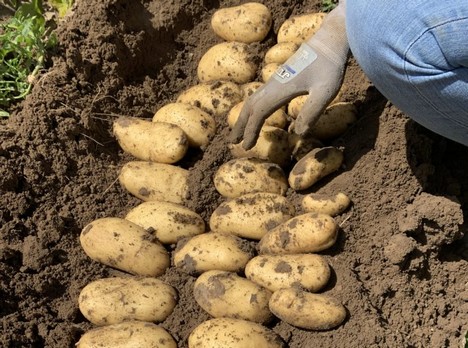 Faced with a market with a high demand for new potatoes, not only nationally, but also internationally, the company has good prospects for this harvest. Thus, according to the forecasts of Patatas Meléndez, they estimate that sales in the regions of Andalusia and Murcia will exceed 35 thousand tons.

In the words of Juan Manuel Coello, Director of Operations of Patatas Meléndez, "we have a very good feeling about this season. The reduction in the acreage, as well as the weather conditions, posed a challenge. But we have worked with great effort hand in hand with our growers to reach the shelves on time and offer the consumer the best raw material."

"The first two weeks of May have been marked by greater uncertainty this year due to the bad weather in Murcia, where yields are lower, with batches that have not been able to go to market and where greater efforts will have to be made in the sorting due to the impact of rainfall. Andalusia's production has allowed us to supply the market without problems and with good quality, with high demand and good prices as a result of the lower production in Murcia," says Juan Manuel Coello.

Although production costs have increased significantly, the director of operations says that the high prices are making up for it. "The rise in costs led us to update the contracts with our producers and customers. For the time being, free producers are also not dealing with any problems to make a profit thanks to the excellent prices."

"Thanks to our Agrarian Plan and agreements with local farmers, we have managed to ensure the profitability of producers. Thus, we have worked on a weekly planning that will help evenly distribute the weekly production between the various distribution channels," he says.

Patatas Meléndez has made a planning of the weeks and varieties in order to work in an orderly manner that provides security to all the growers who collaborate with the company, thus guaranteeing the best product for the consumer. The next step for Patatas Meléndez, after finishing the campaign in Andalusia and Murcia will be to start the harvest in Castile-La Mancha, and later to finish in Castile-León, bringing the season to a close.

About Patatas Meléndez
Patatas Meléndez markets around 180 million kilos of potatoes, which it sorts, packages and distributes. The year 2021 closed with more than 90 million Euro in turnover. Today, it has a team of more than 370 professionals and more than 500 farmers adhered to its Agrarian Plan.

In the course of 2022, and in the framework of its powerful digitalization strategy, Patatas Meléndez will complete the construction of its new automated and digitalized 21,600 m2 factory; a plant that will become a pioneer in the sector at European level with the introduction of the latest technology, pursuing maximum efficiency. This project, in which Meléndez has invested more than 32 million Euro, involves the digitization of the crop, the use of green energy and the reduction of the use of plastics in containers and packaging, as well as an efficient use of water in order to reduce its water footprint.

"The mission of Patatas Meléndez is to ensure that the consumer has the best experience and is able to enjoy the products' unparalleled flavor and texture 365 days a year," says Juan Manuel Coello.