"By doubling our capacity, we can respond to market developments with agility and at short notice"

At the start of the German berry season, growers and packers are looking with some concern at the impending packaging material bottlenecks, especially in the market-standard berry trays. Hans John Ltd, based in Mindelheim, Germany, would like to help the domestic berry industry overcome these bottlenecks. Shortly before the start of this year's season, production capacity in the peel sector was almost doubled. In addition, the company has stocked up on appropriate raw materials at an early stage, Managing Director Thomas John informs us. 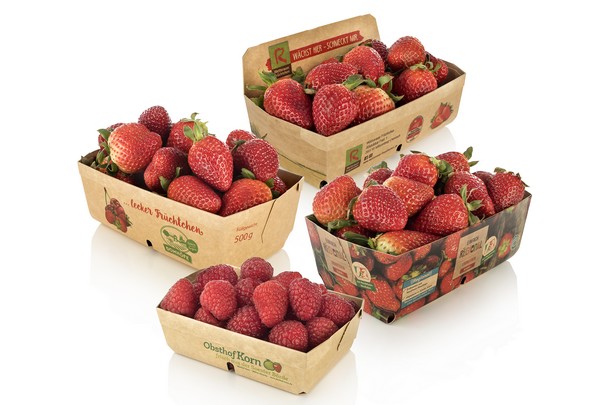 Considerable capacity expansion
For four years now, the Mindelheim-based packaging specialist has been increasingly involved in the production and sale of high-quality cardboard trays for fruit and vegetables. John: "Thanks to the doubling of capacity and sufficient raw material stocks, we can react with agility and at short notice to special requests and increases in demand, even during the berry campaign. Depending on the product, we can produce up to 600,000 pieces a day."

Since the first year of production in 2018, the demand for high-quality and sustainable cardboard trays has grown tremendously, John continues. "Open trays are the most popular of these, although our Easy Fix lidded trays are also growing in popularity. The latter product line is available with both attached and separate lids. Both variants can be individually printed starting at 25,000 pieces, so even the medium-sized or owner-operated business can rely on us accordingly."

Stability and product protection
The cardboard trays are also available in a variety of standard market sizes, from 125 to 1000 grams, John further describes. "Raspberries and blueberries are generally packaged mainly in 200- or 250-gram trays, but for strawberries, the 400- or 500-gram trays are still common. In general, the trays have become more robust in recent years. This stability and optimum product protection play a major role in ensuring that there are fewer pressure points on the product to be marketed during the supply chain and thus fewer failures, which is ultimately also in the interest of the respective retailers."

The demand for innovative and forward-looking fruit and vegetable trays will continue in the coming years, John concludes. "Similar to what has already been the case in France since 01.01.2022, Germany will also try to move away from plastic to a large extent in the near future, which is also actively promoted by the legislator. Fortunately, as a packaging supplier, we reacted to this market trend at an early stage, and we will continue to actively devote ourselves to the development of new solutions in the coming years, keeping our finger on the pulse."