Imports during the season depress prices and sales

There are just under six weeks left until the end of the asparagus season on June 24. Despite asparagus being of top quality and a good harvest, the asparagus season has not been satisfactory so far. The strawberry season is also off to a difficult start, again despite top quality. This is because, as with asparagus, the trade kept importing asparagus and strawberries until mid-May, which put a strong downward pressure on the price of domestic produce. On the other hand, partly exaggerated prices of the trade for regional asparagus and regional strawberries, i.e. high margins for the trade, caused great displeasure among buyers and purchasers who felt they had been overcharged.

"We are disillusioned and disappointed. With Corona, the war in Ukraine and the climate crisis, we thought it should now have become clear to everyone how important it is to produce food in one's own country. Far from it, the trade keeps imported goods at ridiculous prices on its shelves right into the middle of the season, alongside domestic asparagus. Strawberries are hardly faring any better. Traders are importing bio produce from far away, letting domestic produce down, knowing full well that this endangers the existence of the farmers, and that regionality and seasonality can save a ton of CO2 emissions, says Simon Schumacher, executive in the network of the asparagus and berry federations association.

Low-priced import commodity
Imported asparagus and strawberries can be offered in Germany more favorably than domestic goods, since they were produced at lower wages. In Italy, there is no minimum wage. In Spain, the minimum wage is 6.06 euros per hour, in Greece it is 3.83 euros per hour, and in Hungary it is 3.21 euros per hour. At currently 9.82 euros per hour, Germany is already more than 1.5 to 2.5 times above that level.

According to the Agrarmarkt Informations-Gesellschaft (AMI), asparagus prices were reduced at all trade levels after Easter. While the quantities were only just sufficient for the Easter business, an oversupply quickly built up after Easter. The market power of food retailers became more apparent at this stage, and prices came under pressure. According to AMI, in 2021 April and May were the months with the strongest imports of asparagus, especially green asparagus. In 2022, retail promotions for imported asparagus were still running in calendar week 19 (mid-May). Imports accounted for 10 of the 60 total promotional pushes, most of which was green asparagus.

In addition, due to inflation and uncertainty about the world situation, local asparagus and strawberry lovers were more cautious so far this season. Which is why demand for asparagus was very satisfactory only at and on Easter, and good on Mother's Day. The demand for regional strawberries was restrained and is now only increasing with the warm weather. 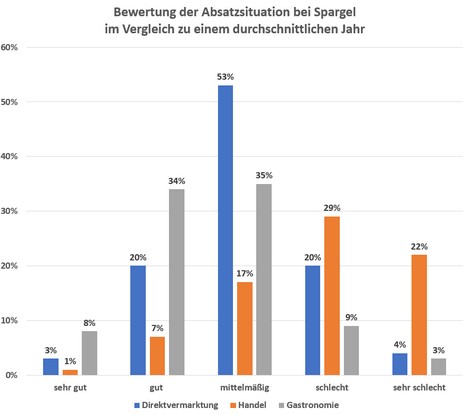 Sales and reasonable prices: Direct marketing wins - trade loses
A survey by the Netzwerk der Spargel- und Beerenanbauer e. V. (network of asparagus and berry growers), which took place from May 10 to 16, 2022, and in which 274 farms participated, shows the following picture of the asparagus market: in trade, half of the respondents (51 percent) state that the sales situation is poor to very poor compared to an average year. Less than one in five respondents (17 percent) still rate sales as average, and only 8 percent as good to very good. Food service is doing well to very well at 42 percent, mediocre at 35 percent, and poor to very poor at about 12 percent. Direct marketing is rated good to very good by just under a quarter of respondents (23 percent) and more than half of respondents (53 percent) say sales are mediocre. The final quarter (24 percent) rate sales through direct marketers as poor to very poor. (Respondents: 237) 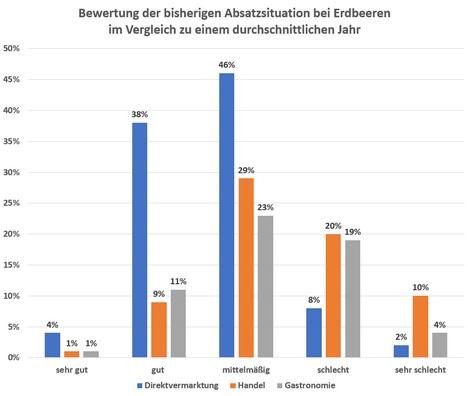 In the retail sector, sales of strawberries to date are rated as poor to very poor by one in three respondents. Under one in three still classifies sales through the trade as mediocre. 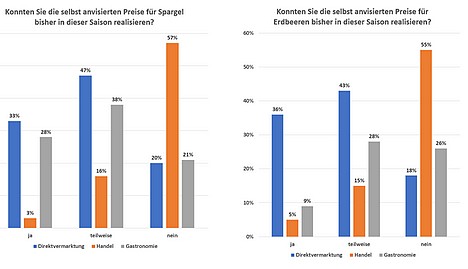 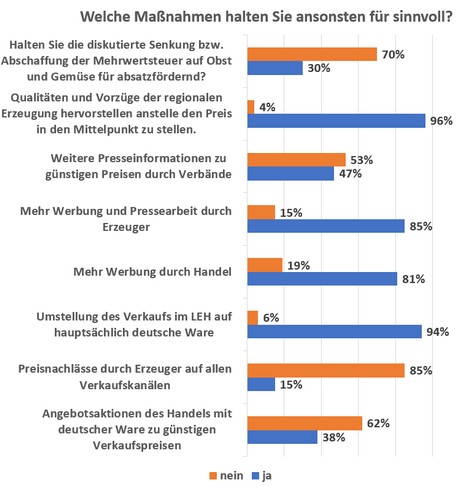 Almost all respondents believe that as a measure to promote sales, the focus should be on the quality and benefits of regional production, rather than on price, and that retailers should switch earlier from imports to local produce. There is also strong agreement that producers and retailers should do more to promote the products. More than 80% of respondents oppose price discounts on all sales channels.

The big question on the 12 euros minimum wage
The current situation is already giving asparagus and strawberry producers a bitter taste of what awaits them in 2023 with the 12 euros minimum hourly wage. "The growers and cultivators are happy to pay 12 euros per hour, but this assumes fair prices. Currently, it is clear that domestic production is not valued and remunerated accordingly. In the industry, the displeasure becomes ever larger. The demands are growing, production costs are rising, and the pressure on prices is increasing. If prices do not adjust in line with the minimum wage, it will mean the end of many farms," says Fred Eickhorst, board member in the network of asparagus and berry associations.

*Note on the figures: Since the asparagus and berry farms do not always serve all distribution channels, the percentages do not always add up to 100 percent. Not all questions were relevant to all farms, as not all grow both crops. For this reason, the number of answers is given in parentheses after the text passages.