It is estimated that the total output of cherries this year is 800,000 kilograms, which can be harvested until the end of the month

In May, domestic big cherries officially entered their harvest season. According to the Ministry of Agriculture and Rural Affairs, the current cherry planting area in Hefei is about 666 hectares, and the total output of cherries this year is expected to be 800,000 kilograms. The cherries have been on the market since May 1 and are expected to last until the end of May. 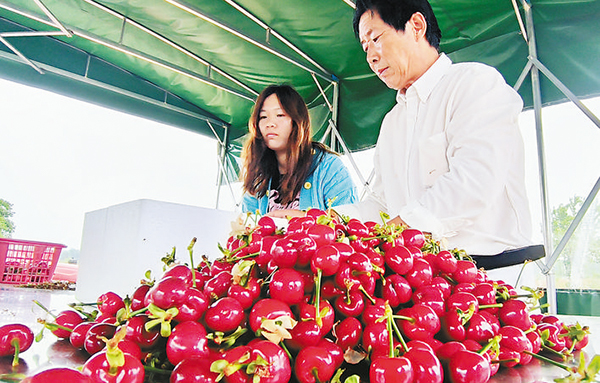 Although the price for tourists to pick cherries is 30RMB/kg, there is still an endless stream of citizens who come to taste early fruits on weekends. "At present, around 1 hectare of large European cherries are planted in the orchard, mainly three varieties of Hongdeng, Meizao, and Summit." Zhu Yinggen, the head of an agricultural family farm, said. Zhu Yinggen introduced that this year's cherry-picking on the farm began on May 4 and continued until May 25, with a duration of about 20 days.

As the South American cherries in the winter fruit market went out of the market at the end of March, all the big domestic cherries are currently on the market. Domestic big cherries are planted in Shandong, Northeast, Southwest and other places. In the Yangtze River Delta region, although Hefei's cherry industry started late, it has a high starting point, large scale, and technical integration in place, and the basic conditions for industrial development are already equipped.

Meng Xiangzhen, the chief expert of Hefei Peach and Small Miscellaneous Fruit Expert Studio, said that after more than ten years of development, the cherry planting area in Hefei has grown to about 666 hectares, of which 200 hectares of Chinese cherries (small cherries) and 466 hectares of European sweet cherries (big cherries) have grown. The main varieties of Chinese cherries are Purple Pearl, Hongfei, and others. The European sweet cherry varieties include Meizao, Labins, Summit, Brooks, Huangmi, Hongdeng, Qinying No.1 and others.

According to Meng, due to the high-temperature heat damage at the end of March and early April this year, the yield of sweet cherries has been seriously reduced, but the output of a small amount of early cultivation is stable, and the total output of cherries is expected to be 800,000 kilograms. In terms of price, the price of cherries on the market before and after May 1st is ranging from 20-30RMB/kg. The market for cherries starts from May 1st and is expected to last until the end of May.