British apple season will be officially launched on 3rd October

On 12th May British Apple and Pears Ltd. held a webinar for retailers and trade to discuss the 2022 season. This year the British apple season will be officially launched on 3rd October.

Ali Capper, British Apple and Pears (BAPL), Executive Chair spoke about how the top fruit industry has always been a balancing act between risk and reward and how now the scales were tipping the wrong way. She said that growers were usually most concerned about the weather but now the biggest worry was inflation, which is out of control. Labour, energy and logistics have seen a treble digit increase.

Costs have always been on the increase but productivity gains and stables prices have ensured growers returns, but that is now changing. Ali said that there is the opportunity for the UK to be more self-sufficient but there were also many challenges. 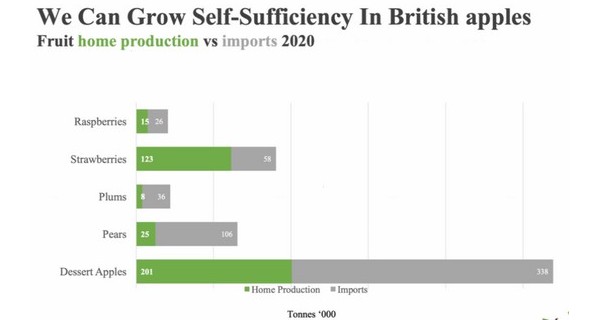 Sharp increase in labour cost
This year the government introduced a new wage rate of £10.10 for seasonal workers which is an increase of 13.4% and combined with the new rate of National Insurance contributions totals a 15% increase on wage bills. The cost of labour in the UK has trebled in the last decade increasing from £7.57 in 2013 to £12.32 in 2022 (with NI contributions). Labour now contributes 20-25% to the cost of production.

Last year a bag of apples cost around 85p, if this increase was to be added it would now cost £1, according to Ali growers have no choice but to increase prices.

What can growers do?
It was widely agreed that growers have to work together, look at the cost line and ensure costs were absorbed by the supply chain to ensure future investment in the industry. In the top fruit sector there has to be long term investment as it takes around 8 years from ordering the tree until a grower sees full production volumes. 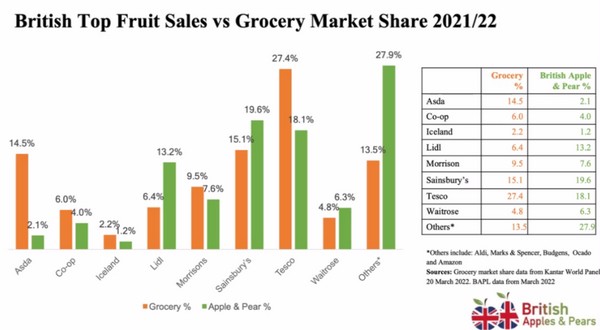 Market Share
Retailers do a good job of stocking British apples, with Lidl and Sainsbury’s coming out top. In the column ‘others’ Aldi is one the biggest along with Marks & Spencer. Asda and Tesco could do better. 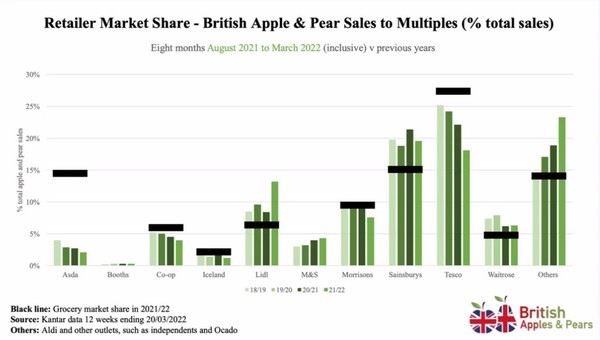 Market share 2018/19 -2021/22
The change in market share at the various retailers has been up and down over the last few years. ASDA, Coop and Tesco have the most significant drop while again Lidl comes out top with a sharp increase last season. Aldi also showed an increase.

2022/3 season launch
In this year’s season launch British apples will be promoted as value for money, with excellent fridge storage reducing food waste and low food miles. 'Value at the Core' will be the consumer facing hash tag with Health, Sustainability and Affordability as the main messages. Chef Raymond Blanc will be the season launch ambassador.

Q&A session
On the panel were:

What are growers doing to mitigate the massive price increase?

Tony Harding, Worldwide Fruit said growers were moving to intensive production systems, spreading the costs and reducing waste. He said growers need returns in order to be able to invest. Labour was a significant factor with increases of between 40-50% and there was a move towards automated picking but it was not imminent, investments would be needed for the technology and to create the right canopies for automated picking.

James Simpson, Adrian Scripps said that collaboration was vital and growers should not be competing with each other. They could look at sharing machinery and pooling labour, although at the moment it looked like there would be adequate labour supply, it is not always available when growers need it. Packing facilities could also be shared as running a modern packing facility could be challenging.

Tom Hulme, AC Hulme agreed that labour costs would be challenging and has been exacerbated by the government’s attitude. They are looking as always. at local labour and making the most of what is available. He said you have to make it attractive for people to work for you, but it remains difficult.

James Goldsworth, Bardsley England said you have to make sure that people who want to work in the UK have the support they need to encourage returners.

Robotic pickers
Participant were asked how long they thought it would be until we had robots picking the fruit. The answers were quite varied from a few years up to 10. In the last few years there has been a lot of investment into robotic technology across the fresh produce industry and there already trials going on in UK apple orchards but the general consensus was that it would at least 5 years until robots were picking apples on a commercial scale.

Innovations in the apple category
Soft fruit and grapes have seen some great new varieties over the last few years and there has been a bit of ‘theatre’ on the retailer’s shelves about them, but what about apples? It was agreed that innovation was needed and also support from the retailers for better shelf space and promotion of the British brand. Early varieties are a good option to start the season in August and they are currently under trial to do this. Introducing new brands is also key, but it can be challenging to get retailers on board with this.

When the question: 'Is it a good time to be asking retailers to increase prices' was asked, Ali replied saying that it is exactly the right time to talk about price increases. While promoting the storability of apples, consumers will not be wasting money when buying apples compared to other snacks. It was also said that retailers had to accept that price increases were out of the grower’s control and that ultimately retailers were going to have to absorb these increases and decide how much they were going to pass on to the consumer.

Despite all of the challenges faced by growers, the season ahead is looking positive from a production point of view with favourable growing conditions so far, but there is still a way to go.