In the case of white and purple as well as green asparagus, the focus was obviously on domestic offerings. Imports from Spain, Italy, Greece, the Netherlands and Belgium did not go beyond a supplementary status. According to the BLE, domestic deliveries grew once again and generally outstripped sales. Surpluses from the previous week had to be handled additionally in various cases.

Therefore, prices tended downward at the beginning of the week. The closer the weekend and the associated Mother's Day approached, the more often the distributors could again increase their prices, as demand had improved noticeably. Only in Munich did some batches then drop in price again as a result of volume problems. 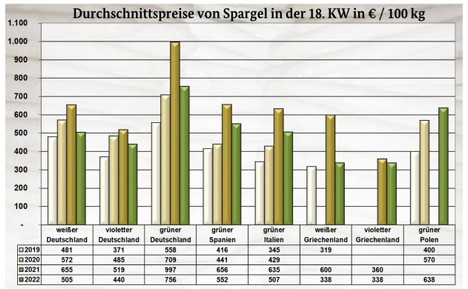 Apples
Older European batches still formed the basis of the range. The appealing organoleptic characteristics made it difficult for imports from overseas to increase their market share. Chilean shipments dominated over New Zealand ones.

Pears
South African imports were dominant: Rosemarie and Williams Christ were slowly replaced by Trout and Packham`s Triumph in line with the seasonal timing. Abate Fetel played a larger, Flamingo a smaller role in the assortment. From Chile, Abate Fetel was predominant, flanked by Williams Christ and Forelle.

Table grapes
South African arrivals became more limited, but still dominated the market. The presence of Thompson Seedless from Chile and India intensified. Demand was met without difficulty. Sales were not particularly strong.

Strawberries
Local produce dominated over Dutch and Italian. Only small shipments came in from Greece, Belgium and Spain. Demand could not always keep pace. Especially at the beginning of the week, clearing was not consistently successful, although the quality was quite appealing.

Lemons
The influx from Spain and Turkey was limited, but sufficient to meet demand. Meanwhile, fresh deliveries were coming in from Spain, which locally cost noticeably more than the stock.

Bananas
Markets unanimously reported very slow trades. Prices frequently remained at their previous levels. Only in Munich did second and third brands increase in price a little due to initial purchases.

Cauliflower
Domestic and French offerings formed the basis of the range. From Belgium and the Netherlands came only complementary, but very high quality items. Italian products were nearing the end of their season, as could be seen from their weakening condition and limited deliveries.

Lettuce
In the case of iceberg lettuce, domestic, Belgian and Italian shipments joined the dominant Spanish shipments. The quality of the latter was not always convincing. As a result of the extended availability, prices trended downward. In the case of lettuce, Belgian offers dominated over domestic ones.

Cucumbers
In the case of cucumbers, domestic and Dutch products predominated over Belgian ones. Deliveries became more dense and in some cases outstripped sales. In those cases, price concessions were needed, to avoid the creation of stocks.

Tomatoes
There was a wide assortment of tomatoes, in which TOVs set the tone. These came primarily from Belgium and the Netherlands. Turkish, Spanish and domestic offerings rounded out the scene. There were no clear price trends, with both price increases and reductions.

Sweet peppers
As in previous weeks, Dutch produce dominated the market. In terms of importance, Turkish, Belgian and Spanish items followed. In Munich, Spanish deliveries decreased in price due to the purchase price. Turkish imports also became cheaper as shipments increased again after the end of Ramadan.