'The quality of the European apple lots usually remained satisfactory'

European batches still dominated in the apples sales, with domestic ones forming the basis of the range: Elstar, Jonagold, Boskoop and Braeburn were predominant. From Italy, Golden Delicious and Granny Smith continued to dominate. France was most often involved with Pink Lady and Jazz. Dutch and Belgian deliveries did not exceed a supplementary status. The quality of the European lots generally remained satisfactory.

Prices remained stable, in most cases. In isolated cases, they also trended upward or downward, but no clear line could be discerned. Imports from overseas increased: Royal Gala, Elstar and Granny Smith came in from Chile. The first New Zealand produce arrived. 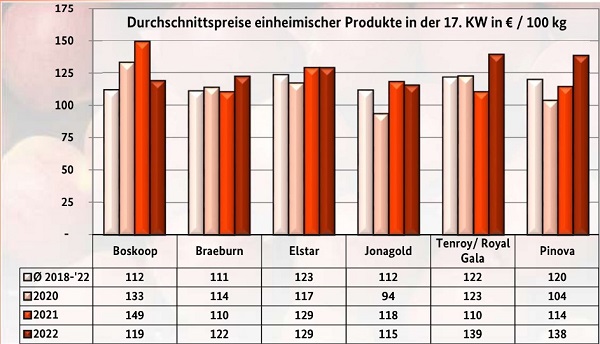 Pears
Availability was generally in step with the sales. Demand was rather restrained, so business was rather quiet. No particular changes were discernible in terms of pricing.

Table grapes
Supplies from South Africa, Chile and India intensified and exceeded sales possibilities. Demand was not particularly strong and it was easily satisfied.

Strawberries
Demand could not keep up with the expanded availability. This meant that traders were forced to reduce their prices, particularly at the start of the week.

Lemons
In general, demand could be satisfied without any problems. Prices mostly remained at their previous levels.

Cauliflower
French, domestic and Italian goods formed the basis of the range. Demand was satisfied without major difficulties, although availability was limited on the whole.

Lettuce
Lettuce came from Belgium and Germany. The goods were often discounted as a result of limited sales.

Cucumbers
As usual at this time of the season, Dutch, domestic and Belgian cucumbers predominated. Although the supply had not expanded, it was still too large for the demand.

Tomatoes
Availability increased, but the demand could not keep up. Surpluses built up. Distributors had to reduce their prices, sometimes drastically, if they wanted to avoid stocks.

Asparagus
Domestic products predominated in both the white and purple as well as the green spears sector. The weather brought a veritable glut of German goods to the markets.