"The market has been extremely receptive to pears from overseas"

Due to considerable crop losses and a correspondingly early end of season for the popular Italian table pear Abate Fetel, this year's overseas imports already got going at the end of February. "German retailers already listed the first South African Abate Fetel in week 11/12. Normally, larger volumes only start to come in at the end of March and the beginning of April. Apart from Conference, the European table pear market was pretty much cleared, which is why the market was extremely receptive to overseas produce," says Malte Wegener, buyer and seller at Gustav Wegener u. Sohn & Co, based in Jork. 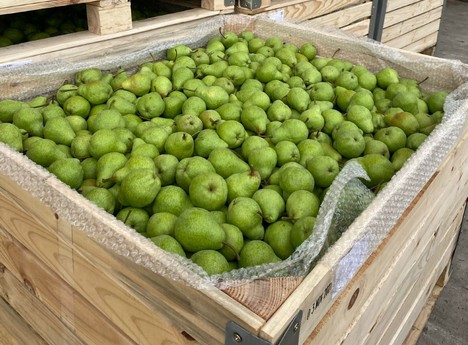 Pome fruit from the southern hemisphere for the German market: Williams Bon Chretien from South Africa.

"An empty market attracts a lot of goods," the fruit merchant continues. Supply and demand are still balanced out, but surpluses cannot be ruled out, says Wegener. "An increase of products that were originally intended to go to Russia -predominantly Class II Packhams and Williams- is pushing into the Western European market." However, so far, these goods could be accommodated through promotions in the food retail sector, via wholesale markets or customers in Central Europe.

Gustav Wegener u. Sohn is primarily dedicated to supplying German food retailers with table pears from South Africa and Chile. Wegener: "In the next four to five weeks, there will still be sufficient imports from South Africa, after which we will continue with Chilean Abate Fetel and Forelle." The season for the South African early pear Céline is already over, he said. "Other varieties, however, such as red-skinned Forelle, can be sourced from both countries and will be on offer until late August." 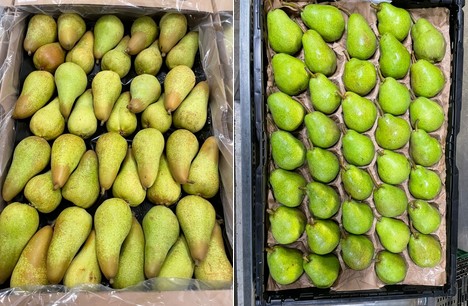 Revival of pear cultivation in the Altes Land
Within the European season, the northern German trading company is concerned with the distribution of domestic tableware as well as Belgian and Dutch Conference. Although the surrounding Altes Land region is known par excellence for its apple growing, pear production is experiencing a revival, Wegener observes. "More and more new pear trees are being planted, something we traders are welcoming. This year's season saw smaller volumes of regional Conference through the end of the year, while the Alexander Lucas supply ended in February."

In addition, club pear Xenia (Novembra) has been rapidly gaining in importance in recent years, Wegener said. "Xenia is also enjoying increasing popularity in the Altes Land, both among consumers and fruit growers. This interest on the producer side has already led to several new plantings in the region. I see an increased marketing potential for this variety in particular." 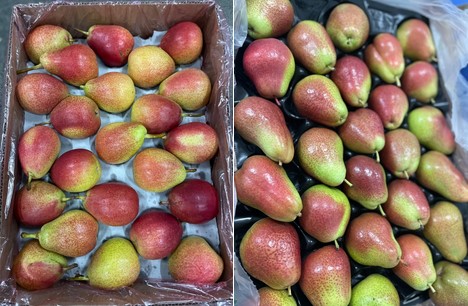 In addition to Abate Fetel, red-skinned overseas pears round off the range: Celina from South Africa (l) and Chilean Forelle.

Extended transit times for overseas apples
Until the start of the domestic pome fruit season, certain varieties are dependent on imports from overseas. For apples, too, the first imports from the southern hemisphere are already hitting the market. "The first Royal Gala from South Africa as well as New Zealand have already arrived and the first retailer programs will start this weekend. At the same time, we are expecting the first arrivals of New Zealand Cox Orange in a few days. This variety is available for a relatively short time - about six weeks - and goes mainly to specialty retailers."

Certain apple varieties will see a slightly later start this year, in part due to the still-difficult freight and logistics situation. "Transit times are considerably longer than usual: that means for Braeburn and Pink Lady from New Zealand, we have to expect delays of two to three weeks," Wegener concludes.