Pomegranates have experienced a relatively good season in most countries, with the European market appearing particularly positive despite higher costs of freight, as consumption in France continues to rise and the production in Italy has almost doubled compared to last season. In South Africa, logistical issues have hampered exports to potential markets, frustrating many growers. Although logistical issues have been less of an issue on the North American continent, pomegranate growers here are concerned about the effects of the low availability of water and labour. 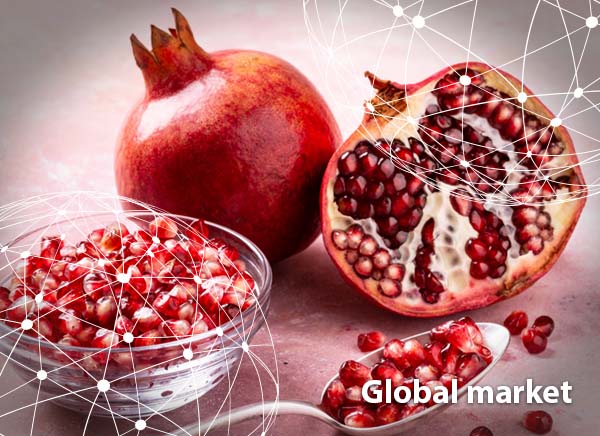 Netherlands: Lower prices for pomegranates, despite high freight costs
Turkey has continued to send pomegranates for a long time, but currently Peru is prevailing on the pomegranate market. "Peru has a production of 20-30%, so it is inevitable that the price will drop. At the same time, this is not really possible because the freight rates are three times higher,” notes a Dutch importer.

Because of strikes in Peru, there might be fewer pomegranates in the coming weeks, but according to the importer, the stocks are such that this will not cause an upsurge in the price. "Last year we had an exceptional season with high prices, this year we will have to make do with a different price level."

The Peruvian season will certainly continue until week 30. A relatively new market for the pomegranates means that the small sizes, 16-18, are finding more and more sales for the juice machines in the supermarket.

Germany: Good season with pomegranates from Egypt, India and Turkey
A wholesaler from Northern Germany will start marketing pomegranates from India and then Egypt at the end of April. The overseas season is expected to continue until October, after which the entrepreneur will turn to the distribution of Turkish pomegranates.

They plan to purchase seven to ten pallets with 150 to 160 pomegranates each of the 6- and 7-caliber, which will be sold in turn to German as well as Turkish food retail stores all over the country. According to him, the demand is currently particularly good. There have been no delivery problems.

Prices are currently somewhat more expensive than last year, as both shipping and container costs have risen significantly. In general, the transport costs are enormously high. He must therefore increase the prices between 1-2 euros per crate.

France: Pomegranate consumption continues to rise
The Turkish pomegranate season is coming to an end and is giving  way to the Peruvian season. This first one has been globally positive. Prices remained satisfactory even if the end of the campaign had quality problems linked to an overabundance of rain in production areas. These few concerns in production have therefore generated a significant sorting among importers. As far as consumption in France is concerned, it is constantly increasing. A growth supported by the good reputation of the fruit.

Italy: Positive season for Italian pomegranates
The Italian pomegranate campaign ended at the end of last month. It was a positive year from both a production and commercial point of view, despite the difficulties linked to increases in packaging and logistics. For a major producer in Southern Italy, with over 300 hectares of pomegranates, this year's total harvest was 4,700 tonnes, compared to 2,500 tonnes last season. More than 50% of the volume was sold as fresh produce, with the rest destined for processing. The main customers were retail chains in Italy and abroad, particularly in Germany and Switzerland.

South Africa: Difficulties in shipping frustrate South African pomegranate growers
The pomegranate harvest in South Africa recently ended and yield is expected to be up from last year, but the final export statistics are not yet available and some fruit of early varieties have arrived on the market while the bulk is still on the water, mostly to the Middle East, Europe and the UK.

There were a lot of enquiries into South African pomegranates from late last year (the South African harvest starts mid-February) from the Middle East and Europe where the market was empty, but delays and congestion at South African ports and the availability of equipment and vessels frustrated growers in meeting the strong demand for pomegranates.

Western Cape pomegranate growers had to truck fruit to the ports of Port Elizabeth and Durban to avoid congestion at Cape Town. The Wonderful variety can be stored longer until the market theoretically improves, but that is a luxury that is no longer easily available to exporters because of shipping uncertainties.

Challenges in sending fruit to Russia meant that early Peruvian pomegranates that would have gone to Russia, went instead to Europe where it put the market under pressure. Chile, Peru and Argentina are South Africa’s Southern Hemisphere competitors.

Labour costs, packaging and shipping costs have gone up, while exchange rate uncertainties play a major role in determining returns for growers.

India: Access to US and Australian markets a boon for India
Opening up the US and Australian markets has been very important for pomegranate exporters in India, as it will help increase the volumes to these markets. Especially as demand from Europe and the Middle East has been lower due to the effects of COVID. Indian summer has started, which means colour will not develop in the upcoming months. This means Indian exporters are currently adequately stocked to serve clients for the time being. Logistics have been very challenging for the past 24 months, due to the ongoing COVID-19 pandemic and an increase in freight costs. The war in Ukraine has further increased costs, which means both exporters and clients have to absorb some of these costs.

China: Bumper pomegranate harvest causes low prices
China’s pomegranate season lasts from July to November. The fruit is grown across the country, from Shandong in the East to XinJiang in the West. Last year China experienced a bumper harvest and the season ended with low sales prices.

Last year, Chinese markets opened up to Uzbeki Pomegranates. China also exports pomegranates to Southeast Asian markets including Philippines. China can supply these markets at lower prices than other producing countries including Turkey and Egypt. Tunisian seedless pomegranates are a popular variety for Chinese growers.  Special story, during the first year of the pandemic, a grower from Yunnan known as Brother Pomegranate, became an internet sensation and managed to sell pomegranates worth millions of Yuan by livestreaming to his seven million online followers.

North America: Labour and water two main concerns for pomegranate cultivation
Logistics look to be improving on pomegranate imports. Right now, pomegranates have been coming in from Chile for the past three weeks and arrivals will continue from there until the beginning of July. “The boats with the fresh produce have been getting priority. There’s a little bit of delay but not like we thought it was going to be,” says one California grower-shipper. “Getting trucks to move stuff out of the port has been a little bit difficult but it’s getting better and better as time goes on.”

The grower-shipper says that currently the Wonderful variety of pomegranates are shipping. “The crop in Chile itself is off a little bit--maybe 20 percent compared to last year so there’s lighter volume,” he says. In addition to Chile, pomegranates have also started arriving from Peru, though this fruit needs to undergo cold treatment first.

He also adds that pomegranate demand has been building since pre-pandemic and not only for whole conventional and organic fruit, but for arils as well.

As for pricing, the lower supply and inflation have both led to higher pomegranate pricing this season. “I expect it to hold for awhile because the crop is lighter out of Chile. I don’t think we’ll see a big downturn in the short term,” says the grower-shipper.

Looking ahead at California’s pomegranate season, it will begin the last week of July. “The main variety in California is the Wonderful variety,” he says. “Our early varieties, they’re in bloom right now so we’ll have a better idea of the crop here in about three weeks. We start the early variety, Grenada, out of Maricopa, California.”

And growers are going into the season with labour and water concerns on their minds. “These will be a challenge this year especially for our early season fruit,” he says. “We’re not getting any allocations for the irrigation districts so that’s a big, big concern. Right now we’re purchasing water and we’re paying between $1, 500-$2,000 an acre-foot.”

Peru: Pomegranate production expected to grow 15% this campaign
The Peruvian pomegranate industry has experienced notable growth in recent years and will continue its growing trend for another season. According to data shared by the association of pomegranate producers in the country, 10 years ago, in the 2012 campaign, exports of this fruit were around 5,000 tons, while last year they reached 38,000 tons.

This campaign, which is expected to end in May/June, the sector expects a growth of 15% which, although significant, could have been higher if the pandemic had not delayed the processes of opening new markets for this Peruvian fruit in the last two years, such as is the case of China.

"The main destination for the Peruvian pomegranate continues to be Europe, however we are currently trying to enter new markets, including Japan, China, Korea, Mexico and India," an industry body indicates.

To do this, alternative treatments are being proposed to the traditional cold treatment implemented in other export fruits or to irradiation, the access treatment validated by the US market - more expensive and which requires more complicated logistics – to make it more suitable for this fruit.