“If you’re going to lose money, you can just as well do good”

In the northwestern Ukrainian city of Lutsk, 200 km from the Polish border, the city council gives free meals to more than 15,000 Ukrainians displaced by the war. Last Friday, the feeding scheme saw the addition of South African pears, fruit that were initially packed and shipped out for Russian consumers.

The pears are small-sized Williams Bon Chretien fruit that were underway to St Petersburg via Rotterdam when Russia invaded Ukraine in late February and transhipments to Russia were ceased. 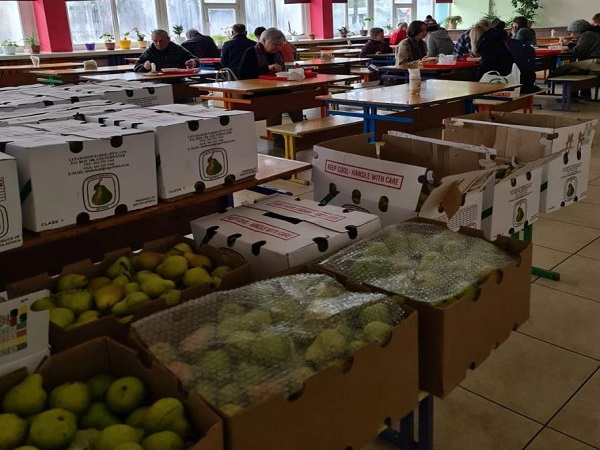 Instead of letting the fruit go to waste, Wayne Mudge, MD of South African exporter Cape Five contacted their buyer in Poland, Erik van Vugt of Fresh World International, on whose involvement in the humanitarian effort FreshPlaza reported in early March. Erik has been living and working in the fresh trade in Poland for thirty years.

In partnership with a Ukrainian charity, Tilky Razom, the donation of the pears was cleared pro bono by Goes Handling in De Meeren while Fresh World International took care of the duties and transport to the Ukrainian border.

The charity thanked Cape Five and Fresh World International for their help to “Ukraine and Ukrainian people who suffered from this horrible and inhuman war”. It observes that pears are a good addition to the diet of the internally displaced.

“If you’re going to lose money, you might as well do good,” Wayne drily notes. He says that their involvement in Covid food relief in South Africa led them to quickly decide to put the fruit, still in excellent condition, to a humanitarian end.

He adds that some of their growers helped to cover some of the costs involved.

There probably are other similar and ad hoc humanitarian donations made by others in the South African industry, he remarks.