As the Northern Hemisphere moves into warmer weather, many countries on this side of the globe are seeing an increase in demand for a summery treat; sweetcorn. Prices for this crop are on the rise in most markets, not only due to increased demand, but also due to the rising production and logistical costs that continue to affect fresh produce markets across the globe. 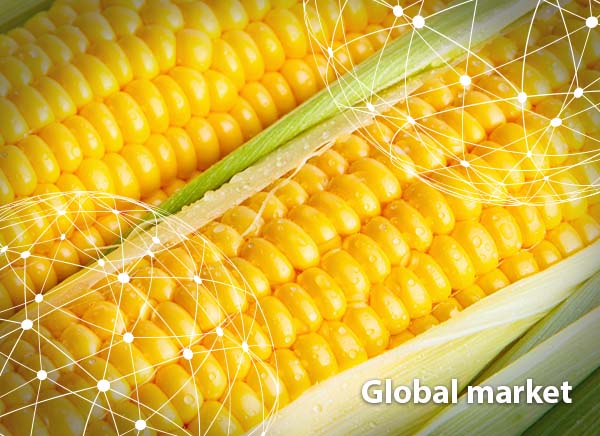 The Netherlands: Remarkably good winter demand for sweetcorn
For one Dutch specialist in fresh sweetcorn, the Senegalese sweetcorn season is still in full swing. "We will continue this throughout the month of April. From 15 April onwards, the first harvest from Morocco will start as well, so we have a small overlap.” He is satisfied with the course of the Senegal season. "We had good quality and sufficient supply. We now have three suppliers in Senegal from whom we get our sweetcorn, so that ensures a constant flow of product. The prospects for Morocco are also good. They are ready to start harvesting. The prices of transport and fertilisers, etc. are considerably higher, but everyone has to deal with that. Hopefully we can remain competitive despite this. Besides, the demand has been very good all winter and that is not always the case in the winter period," he continues. "We had a lot of demand from Switzerland, but also from Spain, where the winter demand was remarkably higher than normal, because Spain is not such a big corn consuming country. Also the demand from Italy, which we see through the Dutch exporters, went well."

At the moment the grower is also already starting to sow the corn for the Dutch season. The first Dutch sweetcorn will be available from mid-July and in larger volumes from August. This year, he will also grow organic sweetcorn on 5 hectares. "This will mainly be for the cooked segment with the vacuum cooked corn cobs." The grower has also expanded cultivation in Belgium this year. "The trend is more and more that supermarkets want to source their products from their own country. Those of us in Limburg have the advantage that we can quite easily cultivate across the border with farmers of another nationality on the left and right. In Germany they are largely self-sufficient, but in Belgium there are great market opportunities for sales to Belgian retailers and for growers it is an interesting crop to have in the crop plan."

Germany: Domestic acreage of sweetcorn is growing
In the German fruit sector, sweetcorn is rather a marginal crop at this time of year. Modest quantities are currently offered from Senegal and Morocco. At the end of April and beginning of May, more batches will arrive from Turkey.

The crop is also becoming increasingly popular in domestic cultivation. Sweet corn experienced a significant increase in area in 2021, especially in Baden-Württemberg, and is now cultivated on 1,100 ha. With an above-average yield of 9.3 t/ha, a harvest volume of 10,300 t was achieved.

UK: Good demand, but logistical issues still a problem
The UK season for sweetcorn runs July to October before moving to supply from Spain, then Africa and back to Europe in the Spring.

At the moment demand is good, and increasing as the country heads into spring, good weather brings week on week demand growth. The biggest challenges just now are supply chain cost inflation, like all other produce all costs are rising. The costs of growing a crop, logistics and importing, have all increased and are still rising. Also, inbound logistics from sea freight vessel disruptions are still an issue on the UK market.

France: Unstable market for French sweetcorn
In an already highly fluctuating market, producers of sweetcorn in France currently have to deal with a rapid and exceptional increase in their costs and production costs (energy, fertiliser, etc.). The Russian invasion of Ukraine has also put pressure on the market for sweetcorn, with price variations on inputs of up to 30%.
East. The unprecedented inflation across the globe is also hitting the industry hard. This all means a rather gloomy outlook for the French sweetcorn season.

Italy: Rising prices for Italian sweetcorn
The manager of a major Italian fruit and vegetable processing company explains that sweetcorn production in Italy is around 3,000 hectares per year. Sweetcorn is used, through industrial processing mostly by steaming, for marketing in aluminium or glass packaging as a long-life food for consumers. The price has risen sharply in recent months due to the increase in production costs (starting with energy and fuel prices), but also because the price of other crops has risen sharply as a result of the conflict in Ukraine and its repercussions, leading to an inflationary spiral that also involves sweetcorn.

The harvesting season usually starts in mid-July and continues until September. More than 50% of the cultivation is concentrated in Emilia-Romagna, about 40% in Lombardy and the rest in Veneto. “Processing takes place within a day,” explains the production manager of the processing company.

Spain: Spanish sweetcorn growers may drop out due to high risks
Spain is currently importing sweetcorn from Senegal, and in about a month they will start with the Moroccan product. During the winter months, consumption of sweetcorn is low and the cost of the product is high since it involves a lot of logistics. In addition, it is a product closely linked to consumption with good weather (heat, sun, house parties, barbecues, etc…) and it has been raining in Spain for several weeks in a row. As spring enters and the weather improves, consumption begins to rise and in summer it skyrockets.

Spanish growers are currently immersed in the middle of the planting season. Due to water restrictions and high production costs (water, fertilizers, phytosanitary products, fuel, energy, etc...), the acreage has been significantly reduced. Even the high price of cereals and the expected price increase due to the lack of supply from Eastern Europe, may encourage growers to leave this crop, since other cereals could be more profitable. Special emphasis must be placed on reducing the sowing area, given that very important production areas such as Andalusia are in the midst of a drought and it had not rained at all at the beginning of the sowing season, so many farmers decided not to sow this year. The significant increase in production costs and the ongoing uncertainty also make many producers rethink what to plant and instead go for other crops with less risks or in which there is no need to incur significant expenses and thus to avoid losses.

It is too early to know how the next harvest will be. Growers have been planting for a bit longer than a month and until 10 days ago everything was going according to plan, but with the rains of the last days, the lack of light, etc... there will be delays in planting and most likely, the acreage will go down and therefore there will be a production gap for some weeks due to delays in plantings. Depending on how spring goes in terms of weather, the first harvest could kick off at the beginning of June, for week 22-24.

China: Demand for sweetcorn set to continue to rise
Recently, the overall price of sweetcorn has been rising sharply. This is caused by multiple factors. First of all, the situation between Russia and Ukraine is deadlocked, and the import cost has risen sharply. Currently, it is hard to say when the conflict between Russia and Ukraine might end. As important source countries of China’s sweetcorn imports, both countries have a great impact on grain imports under the condition of continuous conflict. In addition, the uncertainty of shipping schedule is also one of the important factors affecting the supply. Once the conflict intensifies, the import price of sweetcorn will probably further rise.

Secondly, feed prices rose sharply and the aquaculture industry continued to suffer losses. After Chinese New Year, affected by the rising cost of soybean meal, corn and other raw materials, feed factories generally raised feed prices by 300-600 yuan / ton. With the continuous rise of wheat and soybean meal prices, the production costs of some feed companies have increased significantly, which has reduced their profit. Therefore, feed companies have been using corn, which has a relatively lower price, to replace wheat and soybean meal as the main raw materials of feed, which will not only reduce the production cost of enterprises, but also ensure the profit. This will increase the market demand for sweet corn.

At the same time, a new round of Covid broke out in China a few weeks ago, which meant that some sweetcorn factories had to shut down, and the orders process and supply were largely affected, all of which have made the market situation of sweetcorn unstable.

North America: Growers could need up to a 20% increase in prices for sweetcorn
As the domestic sweetcorn season begins, there are concerns over costs and promoting corn this season.

Currently, limited supplies of sweetcorn are coming out of Mexico. “Limited supplies are not unusual for this time of year. This early spring time is dicey for the growing regions that have to produce so it’s not uncommon to have supply gaps,” says one California grower-shipper.

At the same time on the East Coast, states such as Florida and Georgia are also working on getting production going. One grower-shipper out of Georgia says start dates, which were supposed to be around May 1st, are pushed back until May 10th thanks to recent cold temperatures. The same goes for growers who were starting in the middle of May. He estimates corn acreage in Georgia looks similar to last year at this time.

As for demand right now, sweetcorn demand tends to be linked with the temperature. “Movement is usually a little lethargic when the temperatures are cooler. And once we see, especially in California, the temperatures rise, which they already are, demand will start to follow that,” says the California grower-shipper, noting summer is when demand is strongest.

But demand could be pressed upon this year thanks to industry challenges, including ever growing input costs. “Some of our chemical costs have increased by up to 500 percent,” they say, noting that the concern is about how much to pass along to retailers who don’t want to raise retail prices, particularly on a promotion-friendly item such as corn where deals such as 4 ears/$1 are often seen in peak season. “That’s a staple offering for retailers and if they have to forego that, that’s not going to be received very well. So, there will be a lot of push and pull this year and a lot of sleepless nights for farmers,” they add.

The Georgia grower agrees. “Demand is going to be 100 percent a function of what the retailers are going to put it out at on the shelf. If it’s .50 cents/ear, the corn will stack up and not move,” he says.

All told, they estimate farmers could need close to a 20 percent price increase on their end. “And I’m a little wary because we’re not alone in these increased input costs,” says the grower-shipper. “So some of those deals that have been offered to consumers in years past might not be there this year because it’s not feasible to lose that much money on a promotion.”