The global banana market, which was already facing additional stress on margins due to the high costs of transport and raw materials plaguing many industries, now faces additional difficulties in many countries due to Russia's invasion of the Ukraine. As Russia has traditionally been a large importer of bananas from South America, the recent trade sanctions placed on this country mean that these bananas will have to find an alternative market, causing fears other European markets will be hugely oversupplied. As well as this, many of the raw materials needed for fertilizer in banana production, such as nitrogen and potash, come from Russia and Belarus, which also faces sanctions for its role in the conflict. This means that despite good quality and prices on many markets, suppliers are struggling to make their money back in the banana market. 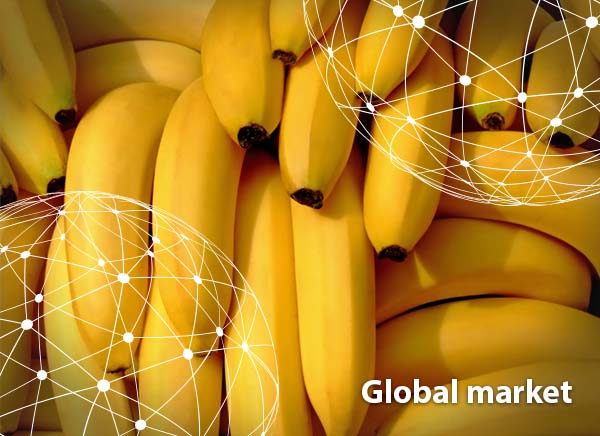 The Netherlands: Oversupply of bananas seems inevitable
Until last week, the banana market was peaking in terms of demand for bananas, although cyber attacks, storms, supply delays and soaring energy prices were causing challenges. However, the situation in Ukraine is having a major impact on the banana market. Whereas Russia was always a big market for Ecuadorian bananas, those lines have now been abruptly cut off. The surplus is already being offered on the Western European market, so an oversupply in the coming weeks seems inevitable.

Germany: Good quality and no bottlenecks
Up to 30,000 boxes of bananas are ripened by a large ripening company in Eastern Germany. The bananas are sourced from Costa Rica, Colombia, Ecuador and other South American countries, which are supplied to various retail chains and wholesale markets. According to the retailer the demand has normalized. In general, he says, he feels that for many companies, business is rather subdued in the aftermath of COVID-19. Due to the dollar exchange rate, he says, the price of bananas is higher, especially since the costs for ripening, freight and labor have also increased. The bananas are sold by the colli in 18kg quantities.

Over the winter the company had to face high risk of storms on the Atlantic and deal with many ship delays. However, there have been no bottlenecks. On the contrary, supplies have been flowing smoothly, despite the storms in recent weeks. At the moment, there are also no problems regarding quality, which is being checked in the harbours of Rotterdam, Antwerp and Hamburg.

France: Russian invasion of Ukraine could increase banana competition
On the French market, there are issues regarding the competition of Latin American bananas. Because of the war between Ukraine and Russia, professionals in the banana sector are worried about the consequences on the market. Eastern Europe is a big consumer of bananas from Latin America, and this origin might find other markets like France because of the situation. The competition might be then more difficult for other origins like the French one.

The French banana market is also impacted by inflation of packaging, energy and low availability of containers.

Italy: Good prices for bananas but high costs push down margins
A major Italian banana importer says: “Prices in Italy at the moment are quite good, as they always are at the end of February/beginning of March. The main issues is the high costs of transport and ripening process which totally erodes the profit margin. Prices would be much better if only the costs of a year ago were the same now.”

And another potential problem is looming: Russia is one of the main importers of bananas from Ecuador, a nation that is one of the world's largest banana producers. Because of the conflict in Ukraine, there is a risk that sanctions will also block sales to Russia, including bananas. In addition, the shipping companies Maersk and MSC announced on 1 March that they would suspend shipments to Russia, although this restriction will not currently apply to foodstuffs.

A wholesaler from the south of Italy adds: "Between the end of January and the beginning of February there were difficulties in the procurement of bananas, due to limited container space and delays in the arrival of ships at our ports. Added to this were the soaring fuel prices, increased production costs and costs for proper business management, and significantly higher tariffs to be paid to transport companies. All this has led to higher prices: bananas have experienced a sudden positive change. At the moment, however, there does not seem to be any further exponential growth in prices. Since the end of week 7, we have also had to deal with the logistical difficulties caused by the protests of the truck drivers, who have prevented us from delivering goods for a week.

Spain: Adverse domestic growing conditions increase import of bananas to Spanish market
Right now, the Canary Islands banana production is quite low due to the impact of extreme climate conditions and the volcano in La Palma and prices are very high. Because of the Spanish banana prices, more imported bananas have entered the Spanish market. Customs data reveals that Spanish banana imports increased considerably during 2021. Banana imports from Central America grew by 15%, while those from Africa grew by 27%, according to the Association of Banana Producers Organizations of the Canary Islands (Asprocan).

According to this association, the tariff benefits for these countries have made competition unstoppable, as evidenced by the import figures. The organization stated that they had already denounced that the tariff decrement program initiated in 2010 would only bring losses without any improvement in social rights or the environment, although it's not the only reason that would have favored banana imports.

North America: Sanctions on Russia could have a negative knock on effect for banana production and market
Currently, supplies of bananas in North America are lower and have been this way since the beginning of the year. Supplies are also lower compared to other years.

“This is due to a combination of many things,” says one shipper. Most notable is fertilization costs. “A lot of producers stopped fertilizing last year because of the increases in the costs of fertilization. That’s the largest contributor to the low supply.”

At the same time, increasing freight costs continue to be a factor influencing just how much fruit is coming into the U.S.

However, supplies are about to pick up by approximately 10 percent and by week 18, much more supply should hit the market.

Currently, Guatemala is the key supplier of bananas into the U.S. followed by Costa Rica and then Mexico and Honduras. Mexico, particularly the West Coast of Mexico, also supplies bananas to Russia. “So with the sanctions, that will dump a lot of supply to our side of the world,” says the shipper. “Though Mexican fruit may stay in Mexico because Western producers don’t have the infrastructure to make it up to the U.S. So that may depress prices in Mexico.”

And then there’s Ecuador, a significant banana growing country that supplies Asia and Europe, including the Ukraine and Russia. However, the shipper notes that Chiquita is working on bringing the fruit not making it to those two warring countries to the U.S. This season, much of the Ecuadorian fruit had been priced out of the U.S. market due to significant freight costs. “But the spot market is apparently $3/box right now and if that’s the case, it’s economically feasible for them to bring that fruit to the U.S.,” he says.

Meanwhile demand for bananas looks good but heading into March, the month of spring break vacations in the U.S., demand is slowing down.

However there is a shift in what fruit U.S. consumers prefer. “The highest quality of fruit you see in the U.S. now is from Mexico or Guatemala. It’s the largest fruit and the sweetest. Other countries such as Honduras and Costa Rica are packing fruit that barely meets market specifications,” says the shipper. “The market seems to be shifting its preferences to fruit closer to the U.S., which makes sense too because it’s cheaper to get it here based on logistics costs.”

Regardless of where fruit is sourced from, undoubtedly the industry will continue to keep an eye on the conflict between Ukraine and Russia and the potential financial fall outs. “Russia is one of the largest suppliers of nitrogen and with the sanctions, that will cut off the nitrogen supply to most of the world. That means the price of fertilizers is going to go up exponentially if this continues,” says the shipper, noting nitrogen is also the fertilizer that, by volume, is used the most. “Ukraine is also an important supplier of nitrogen and other important fertilizers and Belarus is also a really large supplier of other materials used in fertilizer, such as potash. So we’re looking at a worst-case scenario in terms of the world’s supply of fertilizers after coming off a really bad year for fertilizer costs.”

In terms of banana pricing however, currently it’s good and stable in the U.S. “The spot market was a little bit higher than we saw last year. But that’s because everyone priced in the inflation increases at the end of last year with contracts for this year so the base level price for bananas is much higher,” he says, noting the short supplies are key in also making that pricing strong. “When we head into summer, prices will start coming down because there’s going to be more production in the tropics,” he says. “I don’t know how much more they’ll come down. It may not be much because freight prices are increasing. We’ll just have to see what happens with fuel and fertilizer.”

China: Rising prices and sales mark arrival of peak banana season
In the beginning of March, banana prices have been steadily rising and sales have gone up. The domestic market supply and sales have been improving, and the market for imported bananas is becoming more and more stable. At present, Laos and Myanmar have large volumes available for exports to China. Problems of delays at custom clearance remain, and both transportation time and costs have become important factors hampering cross boarder shipments.

China produces bananas in Yunnan and Hainan. Bananas from Hainan are expected to arrive on the market in large volumes by the middle of March, marking the start of China’s peak banana season. China imports bananas from neighboring countries including Laos and Myanmar. Laos bananas have good quality, but many delays are being experienced crossing the border with China. Exports and custom clearance from Myanmar to China have only partially re-opened since the start of the pandemic. There are considerable amounts of harvested bananas in Myanmar waiting for transportation.