Global cucumber production, which in many countries relies heavily on cultivation with added heat and light, has suffered from the increase in energy prices around the world. Some production countries, including the Netherlands and France, have reduced their use of these methods in order to ensure the production is still profitable. Despite these fears, cucumbers remain a popular product, particularly through the summer. In Italy, 41.1% of households bought the vegetable over the last year. 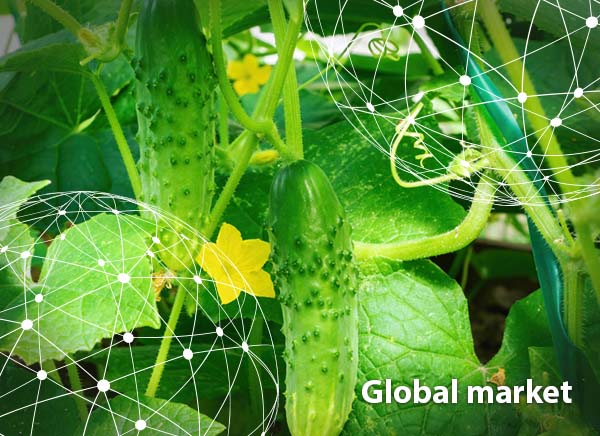 The area isn’t expected to grow much this season. Various cooperatives even reported a slight decrease in acreage. However, there are growers who have exchanged their tomato crop for a (high wire) cucumber crop.

Recently, more and more growers came into production with a traditional crop. The volumes are therefore increasing. However, the expectation is that the volumes will increase more slowly than usual. The first production peak would be in mid-March, a few weeks later than traditional, as many growers have planted later due to the energy crisis.

Opinions differ about the effect of the energy crisis on the lit winter crop. In Belgium there were fewer lit growers this year. In the Netherlands, the area under winter cultivation was similar to last winter season. However, production was lower due to more economical energy use. What the lit winter crop will do next winter season is uncertain. For the time being, energy prices remain very high, making profitable cultivation difficult if not impossible.

Prices were temporarily higher recently period due to lower volumes. In week 7 the average price on the clock at auctions within the Verbond van Belgische Tuinbouwcoöperatie (Federation of Belgian Horticultural Cooperatives) approached the five-year average.

Due to major shifts in planting dates and schedules, peaks and troughs in production are expected at other times this year in the Netherlands and Belgium. Last year, a new cucumber virus, the Cucurbit Aphid-Borne Yellow virus (CABYV), also appeared. This could also have an impact on productions.

Germany: Increase in Dutch and Belgian cucumbers on German market
The presence of imports from Belgium and above all from the Netherlands gradually increased. As a result, the dominance of the Spanish imports slowly diminished. The competitive situation increased as a result and prices crumbled in unison, which led to higher demand locally. In Munich, on the other hand, quotations held their level thanks to a good interest, as both their main supplier country, Spain, and the Benelux producers delivered only to a limited extent. The Spanish harvest was often reserved for retail contracts in Bavaria; products from the Benelux region were limited due to the still high energy costs in greenhouse cultivation. Spanish and Turkish mini cucumbers dominated over Dutch supply. In Berlin, the supply was scarce and therefore recorded a small price jump, whereas Frankfurt offered attractively priced Dutch produce in 4 kg cartons.

In Austria, the domestic season started this week with the first harvest of this year. Due to increased gas and packaging prices, producers are hoping for a total price increase about 10-15 percent. Last season, there was overall a very high demand for regional cucumbers.

France: High cost of production pushes French cucumber prices up
The French cucumber season has just begun. In terms of production, the quality is good, and there appear to be no issues with disease or pests. The big question will be the commercialisation this year. In fact, all the prices are going up (gas, packaging, fertilizers etc.), impacting the price of the cucumber with them. The entire season will depend on the beginning of this season. If supermarkets do not fully open French lines and if the price is too high for the consumer and the consumption is affected negatively, then lot of producers might stop the cucumber cultivation for this year, instead of losing money.

Spain: Melons make way for cucumber production in Almería
After the slight increase in the average price of Almería cucumbers observed last week, the prices at origin decrease slightly again this week. The autumn cucumber enters in its final stage of cultivation with an increasingly reduced supply, a stabilized demand and little competition from other origins of production. The Dutch cucumber campaign will start almost two months later than usual, due to a delay in the traditional transplant dates, in order to reduce costs of production derived from energy use.

A significant reduction in the melon area is expected in Almería in the next spring campaign, according to industry experts. The Galia and Cantaloupe types will be the most affected. The watermelon will slightly decrease the number of hectares of cultivation, especially those harvested in April and the first weeks of May, which will be replaced by cucumbers which, as well as courgettes, could increase their area compared to last spring's campaign.

Italy: Consumption of organic cucumbers is only marginal
According to the latest statistics, 10.8 million families bought cucumbers in 2021, equal to 41.4% of Italian households. Those who buy within this category do so quite regularly, with a frequency of about 6 average acts per year. The cost per single purchase is contained and equal to approximately 1.25 euros with an average purchased quantity equal to 850 grams.

Organic cucumbers only play a completely marginal role in the country: just 0.3% of Italian families buy organic cucumbers and, although this figure has tripled in the last 2 years, it remains at very niche levels.

The seasonality of the category is very strong: purchases are mostly concentrated in the summer months. Therefore, the seasonal adjustment of consumption is also important for the development of the segment.

14% of Italian families buy cucumbers in the discount channel. Cucumbers are also increasingly present in the online shopping channel: from a marginal 1.1% 2 years ago to 2.6% penetration in 2021.

South Africa: Low prices match weak demand for South African cucumbers
The cucumber market is quite volatile at the moment but demand is limp, says a cucumber producer.

Because of the lack of sunshine during the early part of summer, cucumber growth hours were lost and production was down – fortunately, says a cucumber producer, demand Is still very weak and affected by the reduction of the catering and restaurant sectors due to Covid.

“The market is really unpredictable, it’s all the rain. We’ve had a lot of trouble,” a cucumber trader in Gauteng says. “Two weeks ago we were selling for R150 [8.75 Euro] and now we’re selling for R75 [4.3 Euro for a 6kg box of large cucumbers].”

Prices vary wildly and supply has been erratic. Today the average price on the Johannesburg municipal market is almost R12 (0.7 Euro) per kilogram.

Since January production conditions have improved along with more sunny days.

“The cooler weather in Mexico caused a lot of that,” said one grower-shipper. “We had a cold spell about a month ago that slowed the growth and affected the yields. Cucumbers, as soon as they get cold, they just stop growing. It definitely interrupted the supply.”

However, he notes that new growing areas in Mexico are coming, ones with better weather. “It’s warming up a bit more in Culiacan and as you go further south into Sinaloa, you’ll find weather there being a little more cooperative too,” he says.

Along with Mexico’s significant production, there is also production of field cucumbers out of Southeastern states such as Florida and Georgia. “There’s also some offshore production. Out of Honduras, there are some cucumbers that head to the Southeast,” he says.

And then there’s also greenhouse Long English cucumber production, which is largely in Canada out of regions such as Southern Ontario. On greenhouse Long English cucumbers, supplies are excellent says one grower-shipper. “Mexico is still in production and Canadian production is starting up. There are great supplies from all regions,” says the Canadian grower-shipper, adding that supplies are similar to last year at this time.

Supplies should be strong until Mexico is out which is late spring, they add.

Meanwhile demand has been strong for field cucumbers and prices are up. The grower-shipper notes that there’s usually a little uptick towards the end of the winter deal in pricing. “We’ll see it as the transition starts to hit but it’s been a good market,” he says.

As for demand for Long English, it’s strong as well, particularly from Canada. “Canadians are very excited about local production and we always see very high demands at this time of year,” says the grower shipper. “And Americans really appreciate Long English cucumbers. Every year, demand from this country gets higher and higher as they discover the delicate and wax-free skin that they don’t need to peel.”

Demand is also increasing for organic Long English cucumbers which in turn is pushing growing areas to increase their organic plantings.

Looking ahead over the next few weeks, cucumber vines in Mexico will increase as the weather gets warmer. “We’ll start to see some new stages kick in and we’ll start seeing better yields across the board,” says the field cucumber grower-shipper. “Large is a size that foodservice seems to like due to the yield per piece, so we will see an increase as the weather warms up.”

Australia: Most Australian cucumbers grown in South Australia
Australia has year-round production of cucumbers, with some peak supply coming across the summer months. New figures were released for Australian cucumbers this month, according to which for the year ending June 2021, a total of 89,650 tonnes of cucumbers were produced in Australia (down 5% from the previous year) and valued at $170.6 million dollars, which remained steady from the year before. Only a small amount of total production is exported, with 69 tonnes sent internationally, worth $500,000. There are currently three main varieties grown in Australia; Continental cucumbers, the most common accounting for 57 per cent of fresh production, Lebanese cucumbers making up 31 per cent of fresh production, and Baby cucumbers, including the trademarked Qukes, which accounted for 11 per cent of fresh production. South Australia is the biggest producing state (43%), followed by Queensland (35%) and Western Australia (10%) - and the majority of cucumbers are produced in protected cropping or high-tech glasshouses. In terms of retail prices, Lebanese cucumbers are currently selling for between $1-2 each at the major supermarkets, while Continental cumbers are more expensive at $3-4 each.

China: Spring Festival peak prices for cucumbers
Chinese growers were aiming to hit China's Spring Festival in early February to bring the greenhouse cucumber crop on the market. This period is peak season for vegetable production and sales. This year, price per kilogram was over 3 Yuan per kilogram.

Growing market demand and state level investments have led to increased greenhouse cucumber production in provinces such as Hebei and Shandong. A typical Chinese solar style greenhouse harvest around is around 400 to 500 kg per flush. Production is typically sold in local supermarkets.