The entire European citrus industry is on high alert after Israeli authorities confirmed the detection of Diaphorina citri in Israel. Authorities confirmed that the Asian psyllid, the insect that carries the most aggressive strain of the greening disease (Huanglongving or HLB disease) – which is triggered by the bacterium Candidatus Liberibacter asiaticus, had been detected in the country. It is the most devastating citrus disease on the planet, not only because it causes the death of trees but also because there is no known cure.

"The situation is extremely serious as this insect can adapt to the Mediterranean climate. If it reaches the Peninsula, Spain would be affected by the presence of the two HLB vectors (the Asian psylla that was detected in Israel and the African, Trioza erytreae, an insect that has already been detected from the south of Portugal to the Basque Country)," Intercitrus stated.

It seems that it's only a matter of time before the bacteria arrive in the country and spread without remedy. According to a study carried out at the time based on projections of what happened in Florida (USA), under these circumstances, Spanish citriculture would be reduced by half in 7 years and could disappear in less than 15 years. "This unfortunate finding is a milestone that should force the European Union to change its phytosanitary policy and implement, without further delay and systematically, the most guaranteed measures against the main threats to European citrus farming," Intercitrus stated.

"The EU will have its first opportunity to do this on January 31 and February 1, when the EU's Phytosanitary Standing Committee meets to consider what measures to apply to curb the growing threat of the other two most destructive pathogens, according to the EU itself: Thaumatotivia leucotreta and Phyllosticta citricarpa," they stated.

In 2019, the authorities and public opinion were presented with a study of what this disease would do to Spanish citrus crops. The study was based on the evolution of citrus cultivation in Florida since the HLB arrived in this US state. "The study's conclusions left no room for doubt about the severity of the disease: the production of oranges, tangerines, and lemons would be reduced by half in 7.5 years from its possible entry (going from 7 million tons to 3.6 million tons) and after 15 years, citriculture would become a residual crop, it would disappear," Intercitrus stated. 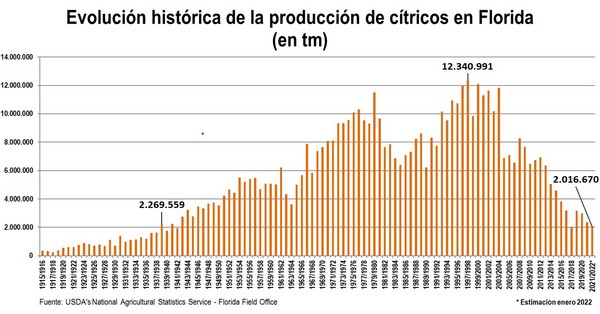 According to the study, the disappearance of the Spanish citrus industry would entail:

The disappearance of 200,000 direct jobs and 79,000 jobs that are linked to production itself.
Losing a business that has an average value of 4,000/4,310 million euro per season.
In addition, it would have a great ecological impact due to the abandonment and degradation of 300,000 hectares that currently absorb hundreds of thousands of tons of CO₂.