According to the BLE, Spanish Navelina continued to predominate in the blonde orange category, having a firm grip on the market. Navels and, to a greater extent, Salustianas also originated from Spain and sold briskly at certain points. Newhall from Portugal cost €14 per 9-kg lot in Frankfurt. Untreated Greek Navelina and Navel completed events as well as Turkish Washington Navel and Moroccan Navel. Italian Moro and Tarocco still predominated among the blood oranges. Cara Cara from Spain completed the ranges. 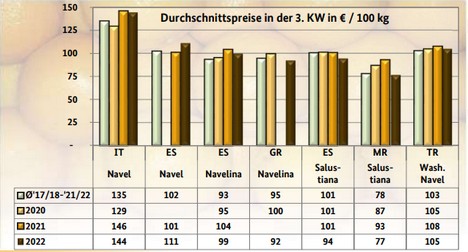 Spanish Sanguinelli gained prominence and saw brisk sakes at some points. Overall, availability was sufficient to satisfy the demand. This was not particularly pronounced, but had improved in some places as a result of low temperatures. The quality of the fruit, however, was mostly convincing. Prices mostly remained at their previous level. Returns from food retailers in networks as well as slightly deteriorating products naturally had to be sold at reduced prices.

Apples
The range did not change significantly, with domestic batches continuously dominating marketing. In general, supply and demand were balanced.

Pears
The supply, dominated by Italian shipments, was sufficient to meet the demand. The latter was rather weak and had hardly changed in contrast to the previous week.

Table grapes
ales were not too great. The demand could not always keep pace with availability. Nevertheless, prices often remained at their previous levels.

Lemons
Availability was sufficient to meet demand. Nevertheless, traders were able to increase their prices here and there, if and when sales improved.

Bananas
Quite inconsistent sales were observed here: There were both increases in price and concessions, as always depending on the demand.

Cauliflower
Italian and French supplies predominated. The competitive situation between the two products left little room for distributors to increase their prices.

Lettuce
Iceberg lettuce could only be accessed via Spanish shipments. Prices dropped off, in most cases. This was either due to a reduced demand or due to too abundant supplies.

Cucumbers
Spanish cucumbers dominated the markets. Supply was not always sufficient to meet demand, which meant that prices often went up.

Tomatoes
Sales were very inconsistent. Both price increases and price reductions were observed.