Domestic goods continued to dominate the market. Innovator was another variety that appeared in Frankfurt. French and Dutch deliveries played only a minor role overall. Prices changed only rarely as trade was slow. This was also the case for early table potatoes. In this sector, there were exclusively Cypriot offers. Smaller price increases were recorded in Frankfurt, as well as cost-related price reductions in Munich. Overall, demand was quite friendly, but partly limited by the pandemic situation, according to the BLE. 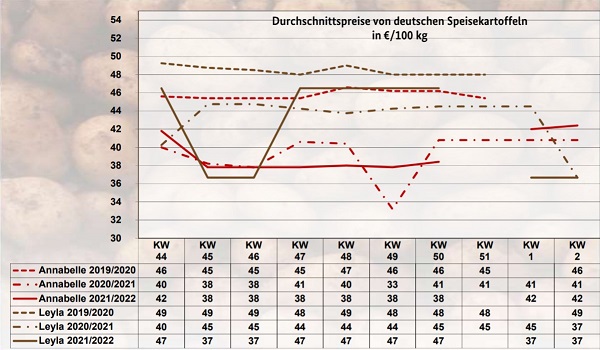 Rhineland-Palatinate: sales run quietly but steadily
The ware potato market entered the second half of January without significant changes. Sales are modest but steady. Supply and demand are well balanced. The notoriously high levels of grading due to various defects are causing stocks to shrink faster. Demand for catering businesses is estimated to be only moderate due to Corona. In food retailing, promotional prices continue to run in large and small containers from €0.40 per kg. Price changes are not due before the end of the month, reports the Rhineland-Palatinate Chamber of Agriculture. 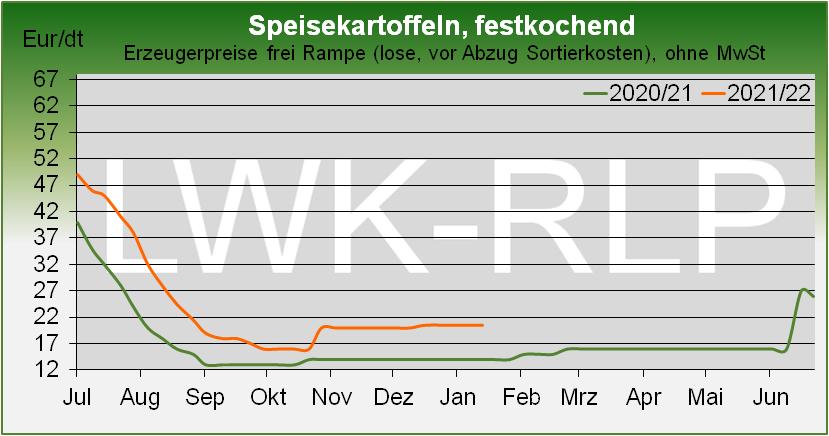 Hesse: Producer prices remain unchanged
Landesbetrieb Landwirtschaft Hessen reports that the marketing of potatoes is within the usual seasonal range. Repeated sales campaigns are intended to stimulate demand in grocery stores. Due to the Covid measures, sales to the catering trade are hesitant. Nevertheless, stock clearance is well advanced. In the current week, producer prices remain unchanged. Sales of sought-after varieties of seed potatoes are proceeding rapidly.

Schleswig-Holstein: Balanced market situation
In the state of Schleswig-Holstein, the potato market is reported to be quiet and relatively balanced. Demand is described as normal for this time of year. Food retailers are providing sales impulses by offering goods at a low price. French tubers are also being placed. In addition, the first early potatoes from Cyprus are available in the trade for bulk consumers and private customers. The local supply is thus supplemented by imported goods.

There are small price premiums for local goods. This is due to the limited quantities of high-quality goods from the 2021 harvest, but wireworm infestation, rhizoctonia problems and also damage to the raw earth repeatedly lead to markdowns. Sorting costs remain relatively high at around 20%. The market is expected to remain quiet in the coming week.

Lower Saxony: No changes from last week
Marketing of table potatoes in the state of Lower Saxony continues to run on a quiet course, reports the North East Lower Saxony Farmers' Association (BVNON). Depending on the quality, price increases or reductions are still possible. Overall, no changes to the previous week are to be observed.