In many European countries, the consumption of mangoes has dropped after the New Year, with markets in the Netherlands also being flooded with produce from Peru, causing prices to drop too. Peru remains the main country of origin for most countries at this time of year, with the Kent variety taking the lead almost everywhere. 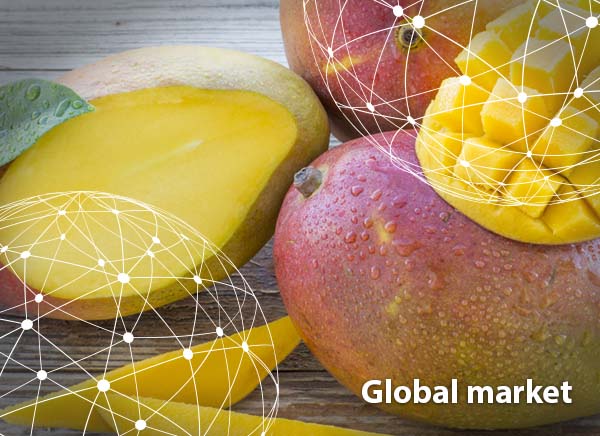 The Netherlands: Blow for mango market in week 1 after a reasonable December month
The mango market is currently adopting a wait-and-see attitude. "In December, the market went well for mangoes. There was not too much supply from Brazil and combined with a sluggish start from Peru, the prices up to week 52 were not fantastic, but all in all reasonable", says a Dutch importer. "However, the hammer came down in week 1 when some Peruvian exporters flooded the market with fruit of poor quality and in far too large quantities. The market could not absorb that and prices fell to very low levels. Now in week 2, the situation seems to be stabilising, although the price still has to go up when you see the increased costs of freight and carton, among other things. But as always in the fresh produce sector, one reaction will probably provoke another, because the supply from Piura, the early area in Peru, is already decreasing again. Who knows, there might still be a very nice season, but the first two weeks of the year, the market for Peruvian mangoes was not great."

Germany: Kent mangoes still by far the most popular variety, but Osteen on the rise
The quality of the current sea and air freight are extremely good, and the same applies to the supply to be marketed. At the beginning of the season in November, sales were rather slow, but in the meantime things have levelled out and marketing is at the level typical for the season, according to an importer.

Kent mangoes in the 12-calibre variety are still by far the most popular with local buyers, while other varieties find their way into the trade only sporadically. "Peru continues to be the leader until April, and batches from Brazil are offered as a supplement. What has noticeably increased in recent years is the supply of Spanish Osteen and Kent mangoes,” the importer concludes.

Italy: Mango purchases slow down after the holidays
A wholesaler in Milan says: "As traditionally happens after the holiday season, consumption of exotic fruit slows down and sales come to a standstill. In addition, at the moment, the increase in infections and the various lockdowns due to COVID-19 developments have a strong impact. Many companies have half the normal staff present, there are difficulties in buying and selling products, there are fewer people around (even in the markets) and this affects consumption.

As for mangoes, according to the wholesaler, the product that arrives by air is very expensive, due to high transport costs, particularly from Peru. In this case, consumption is normal, although it has stabilised downwards. In contrast, the price of mangoes imported by sea from Brazil and Peru (Kent and Tommy varieties, among others) is falling, following the collapse in consumption of these fruits. "The mango imported by air reaches purchase prices of 5.00-5.20 €/kg for a sale at around 6.50 €/kg. The product imported by sea shows purchase prices of about 3.50-4.50 €/kg. Sales prices are not much higher: as consumption has collapsed, we are trying to sell mangoes as quickly as possible," concludes the wholesaler.

According to data mangoes were purchased by over 4 million Italian families in the last 12 months ending in November 2021. This is the highest level in the last 3 years and is equal to 15.7% of the population, with about 3 more points gained in the last two years.

South Africa: High hopes for South African mango season despite rainfall concerns
Most of South Africa’s mangoes are grown in Limpopo Province: Hoedspruit, a major production region, is on par with normal rainfall, but in Tzaneen there has not been as much rain as they would like yet.

Mango growers remain wary of the potential for late season floods in February, negatively affecting the crop. So far, however, the fruit looks very good, high quality, and the size is good. Mango volumes are around 10% down from last year’s production.

The prices for the early Tommy Atkins have not been very good, around R45 (2.56 euros) per 4kg carton. The first Shelly and Heidi mangoes have also arrived on the market, with better prices that are an accurate reflection of the high quality, according to industry sources.

Shelly mangoes are currently trading at R110 to R120 for a 4kg carton and Heidi mangoes are up to R150/4kg carton.

North America: Lower prices due to high logistics costs, opportunities for US mangoes in India
While there are steady supplies of mangoes, logistics are impacting movement and pricing on the fruit.

One shipper says there’s still some Brazilian, and Ecuadorian mangoes arriving into the marketplace. However Peru is main supplier of fruit at this time.

“Peru is very difficult this year. There’s a shortage of containers, a lack of space on the vessels and of course escalating costs,” he says. “The resurgence of COVID is not helping the situation either. Between the logistics companies, the dock workers and the labor shortage, it all has intensified the time to move released containers from vessel to warehouse.”

Peru has been shipping fruit for a just over a month and it appears to be an average sized crop of almost entirely Kent variety. Fruit size is running normal to maybe down a size with no shortages on 10s and 12s.

Coming up ahead is also Mexico, which will begin with early, limited supplies next month. “They will have an early district and then they’ll go to mostly early yellows, Ataulfos, for awhile. They’re not going to be a heavy player on the East Coast until sometime in later March,” says the shipper. At the same time, Peru will run until the end of March. “And once Peru ends production, we’ll begin to see production from Costa Rica, Guatemala and Nicaragua arriving on East Coast.”

Meanwhile the shipper says demand for mangoes is “just ok.” “However the contracts and the movement are good and keeping inventories low. If there was a normal demand right now, we believe the market would be higher than what it is,” he adds.

He notes that pricing is similar to last year. “It’s going to be interesting to see how this pans out. The supply side is not high and the demand side is not high. So with the higher costs, are we going to be able to increase our price? That’s what we’re all looking for,” he says. “All of our costs are higher from production, to packing, container freight and extra charges such as port congestion. It all adds up. Then take cost of moving fruit from the warehouse to destination. We all know freight rates are about double from normal, whatever normal is these days.”

For two seasons now, the fruit has been largely absent from the U.S. market following COVID-19 interfering with exports. As one exporter noted in an article last year, U.S. mangoes could only be shipped under the USDA pre-clearance program wherein a USDA inspector comes to India, supervises the treatment and pre-clears it. That way there’s no risk of non-clearance and it’s a practice that has not happened since the pandemic emerged.

Instead, what’s been agreed to is the “transfer of oversight” program. This allows India to ship fruit by having the mangoes irradiated in India with an Indian inspector prior to arrival in the U.S. “So there will be no pre-clearance and there will be a post-arrival inspection,” the exporter says.

Australia: Increased production of mangoes this season, but delays expected for next year
The Australian mango season is heading into its final months. According to reports, 214,000 trays were sent this week, but that number will gradually reduce over the remaining 10 more weeks of the season. Overall, it is estimated that there will be close to 8 million trays over the whole season, which is up from around 7 million last year.

In terms of production, in the Bowen/Burdekin region, most growers have now concluded their picking season, but there will be small volumes of Honey Gold dispatched from the region this week, with the season expected to conclude this month. In the Mareeba/Dimbulah region, Honey Gold mangoes were dispatched slightly earlier than initially forecast and picking of late-season varieties such as Keitt are expected to start within the next week. Meanwhile, many growers in South East Queensland have experienced some rainfall over the last seven days, however, it has not impacted fruit quality. Some growers are intent on picking the last of their Kensington Pride and R2E2 crops this week, while others will begin their season shortly. In Western Australia's Carnarvon region, volumes are on the rise with the season progressing in Carnarvon, although they are lower than initially forecast. Lately, hot days have pushed the fruit to ripen fast. Growers have reported some crop losses due to the development of bacterial spot that has affected most of the region. While in Gingin (WA) the region continues to experience hot and dry weather. Such conditions have caused some crop losses, affecting especially the smaller fruit from late flowering events. This season might see a particularly late start this year due to late flowering.