Dacomex wanted to significantly expand its capacity for sorting and packing onions. A new hall with a modern production line offered the solution. It was a huge project involving many parties: from architect and contractor to utility installer and machine builder. They engaged Eqraft to supervise this complex process, act as link between all those parties and ensure everything ran smoothly.

Family company Dacomex from Sint-Maartensdijk in Zeeland has been exporting onions, potatoes and vegetables for four generations. The company is led by Martin van Damme and his sons Maarten and Jan, who are responsible for sales, purchasing and production. Since its foundation in 1961, the company has expanded to become one of the Netherlands’ biggest onion exporters.

The lion’s share of their products go to Africa; some 60% of sales. The United Kingdom is another important destination as is South America and the Asia. Maarten who, as well as being sales manager was also the contact point during this project, firmly believes in the quality of Dutch onions: ‘As far as I’m concerned, the aim is maximum quality, not maximum tonnage.’ 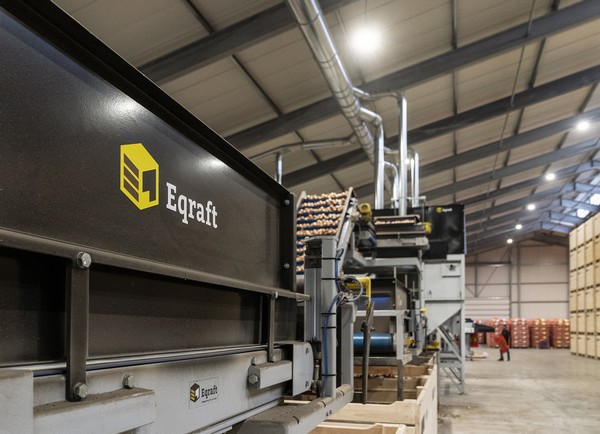 Eqraft as driving force
To maintain that quality, he decided some three years ago that it was time to expand, as the company had started experiencing problems during busy periods: ‘We wanted to be able to work more calmly as well as supply large volumes if a client needed that at the last minute,’ explained Maarten. The machine fleet was also dated and in need of replacement. They eventually chose Eqraft, a supplier of various machines that also offers project management. Maarten: ‘Eqraft is a true onion specialist. We were seeking a party that knows exactly what the process involves.’

Design Brief
The first phase of such a project starts by identifying the client’s requirements, explained Rutger Keurhorst, Eqraft’s commercial manager. ‘What does he want his company to look like once this project has been delivered?’ These ambitions also need to be qualified: what output does the client want and what flow is needed for this? Waste streams are also considered. Eqraft combines all this information in a Design Brief, including a flowchart and process description. 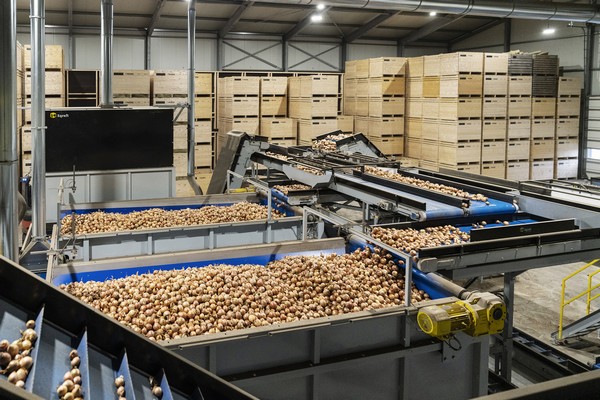 In the case of Dacomex, the requirements were clear: on the one hand they wanted to replace the dated line and they also wanted to expand their capacity. The new line needed to be compact and be able to produce 60 tonnes per hour. Rutger: ‘To present a good plan that completely covered all the Dacomex requirements, we had lengthy discussions at the office.

Discussions with the right parties
He also had to coordinate with many other parties, including the structural engineer, contractor, utility installers, security camera installation company and other machine builders of parts that needed to be integrated within the Eqraft line, to name but a few. Nico: ‘In every phase, I meet with the right parties so that all considerations are discussed and Dacomex can make the right choices.’ He also considered all the practical details: ‘I make sure that clear agreements are made in advance about safety during the work, the construction site layout, where the toilets and canteens should be for our mechanics to use, and so on.’

Good planning is half the battle
Nico produced a detailed roadmap and accompanying planning to ensure that the installation ran smoothly. The sequence really does matter. Nico mentioned a few examples: ‘The building needs to be released by the contractor before the machines can be installed. But sometimes the only way to get a machine in place is to install it first and then build a wall. If asphalt needs to be laid, we can’t then immediately drive over the site with trucks.’ Basically, everything is interwoven and if someone doesn’t keep a tight hold of the reins all the parties keep having to wait for each other. Moreover, it’s hugely important for the client that we minimise any downtime. Nico: ‘We work with various phases, ensuring that the phase in which the client’s line needs to be shut down is as short as possible.’ This is also taken into account in the installation sequencing, with the packing section being the first to be installed. If the sorting section couldn’t be ready in time, Dacomex could then sort the new harvest using the old line and package it using the new line. Fortunately, that proved unnecessary.

“If your planning is good, rolling it out is a piece of cake”
— Nico Bredenhoff, Eqraft project manager
During the installation, the Eqraft foreman Jorrit Boersma kept a watchful eye on site to ensure that everything ran according to schedule, while Nico kept a tight rein on everything from the office. But if he’s done his work well, he doesn’t need to intervene much during the busy and important phase, explained Nico: ‘If I ensure that the planning is correct before the busy period starts, I have the space to introduce changes to the installation if things turn out differently than planned. Then rolling it out is a piece of cake.’ Last minute improvisations are, of course, sometimes needed but, according to Nico, that challenge is what makes the work so much fun.

When the new line was delivered on time on 1 July, it became apparent that the harvest was delayed. This meant there were no onions for a test run. Martin van Damme then immediately went to buy a batch of onions and ran these over the new sorting line that same day. 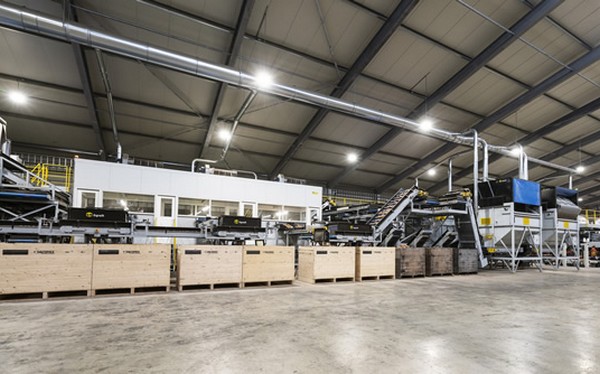 Trust
Nico’s detailed and attentive project management is in keeping with the total solution that Eqraft aims to offer: not only delivering a machine but also providing an important advisory role. Eqraft was involved with the new Dacomex line as supplier of various onion toppers, inspection chambers, evenflows, tipping bunkers, baggers and belts. But perhaps even more important was its role as coordinator: from the construction of the new hall to the delivery of the complete line, including coordination and agreements with third parties.

Nico: “Customers entrust that responsibility to us because they know we’ll arrange everything well. Even if the line is relatively simple, an error can still have a huge impact on an onion company, with its biggest nightmare being unplanned downtime. If they can pass on that risk to us it saves a huge amount of stress.’