Droughts have long posed a threat to farmers in southern Africa, and models predict they will become more frequent, unpredictable, and intense as global warming continues. Drought-tolerant sweetpotato varieties have proven to be lifesavers for farmers who lose their maize or other crops for lack of rain. For this reason, more climate-resilient sweetpotato varieties with characteristics consumers want are urgently needed and this is why drought tolerance is a priority target at the regional sweetpotato breeding platform in Mozambique.

Field trials in Mozambique to evaluate an array of local varieties and breeding parents not only identified some with high levels of drought tolerance, but also served as an opportunity to test the use of drones equipped with sensors to study sweetpotato plants’ responses to water stress on a large scale – an approach with potential to accelerate breeding in the future. 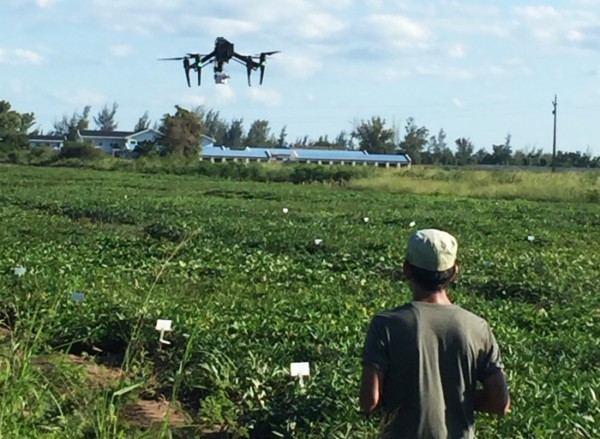 The research is described in an article recently published in the Journal of Agronomy and Crop Science. The investigation consisted of two large field trials with a total of 144 breeding parents and popular varieties over two seasons – one hot and rainy and the other dry and cold – during which drought conditions were induced at different points to assess how plants respond to water stress.  Using visible spectrum and thermal cameras on drones flown over the fields, scientists recorded changes in plants’ chlorophyll levels and the temperature of their leaf canopies, both of which change in response to drought stress. Those changes were then correlated with the amount of foliage and sweetpotatoes they produced.

While breeders have documented common characteristics of drought-tolerant sweetpotato plants, such as smaller leaves and thicker stems, the establishment of indicators measured by sensors on a drone could provide real-time information that scientists can use to select likely candidates for new varieties.

“Understanding how crops behave under different water restriction contexts is fundamental for plant breeding,” observes CIP scientist David Ramirez, a crop ecophysiologist and the article’s lead author. “One of the things we’ve done is to shed light on the mechanisms of drought tolerance,” he adds.

Ramirez explains that the study included simulation of drought conditions at different points in the crop cycle – early, mid- or late-season – to document how different varieties were affected. The results confirmed that while drought early in the crop cycle tends to reduce yield, drought late in the season actually produces higher yields in some varieties. And whereas most varieties yield well when there is sufficient rain, and some yield well in drought conditions, the study allowed researchers to identify a few varieties that produce well in both drought and high-rainfall scenarios, and thus have the potential to boost the resilience of farmers in areas where rain cycles are inconsistent or unpredictable.